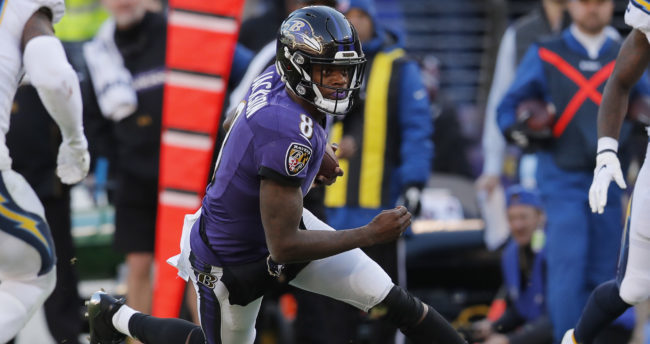 Coming off the bye week, Lamar Jackson and the Ravens are in a good spot against the Vikings at home. He’s is QB3 on the season in terms of DraftKings per game points and provides as safe a floor as anyone around because of how much he gets out and runs. The Vikings are a good defense on the season, ranking 4th in DVOA but I think we are getting too much safety with Lamar here. I do think some passing touchdowns have been left on the table for Jackson this season with only 10 strikes to the end zone so far.

Hurts wasn’t asked to do much in the Week 8 win over the Lions considering the Eagles were literally and figuratively running away with things in that game. But that isn’t likely to be the case this time around against the Chargers. The game has a 50 over/under, second-highest on the main slate, and the Chargers are just -1 road favorites. It could be a close one and that would give Hurts some big upside. His 432 rushing yards rank him only behind Jackson at the position this season (Hurts has played one more game) and that gives him such a high floor.

Zeke is coming off a “down” week in Week 8 with Cooper Rush under center for the Cowboys. But Dak Prescott should be back this time around for Dallas when they host the Broncos at home as -10 favorites. Zeke should be able to once again see a full workload in a high-powered offense and this game script projects out really well for Elliott. He’s reasonably priced on both sites and should see heavy ownership on FanDuel especially. He’s fine in full PPR as well, averaging more than 3.5 targets per game on the season.

Fantasy owners got an annoying “scare” on Monday evening when Derrick Gore appeared out of nowhere and started touching the ball a ton for the Chiefs. That may have only been a blip though with Williams coming back in and ending the game with solid usage all around. He ended with 19 touches (13 carries, six targets) on the game and should continue to see that kind of opportunity in the offense. He’s not the most efficient runner in the world, but the price is still something of a bargain.

With Saquon Barkley still on the shelf, Devontae Booker has taken over the bulk of the running back duties for the Giants. Against the Chiefs on Monday, Booker played 93% of the offensive snaps. He carried the ball 15 times and saw six targets in the passing game. He totaled 125 total yards though couldn’t find the end zone. No matter that, the workload in the offense is plenty to justify paying these prices against a middle-of-the-pack Raiders defense. Obviously, the one wrinkle her is if Saquon were able to return. 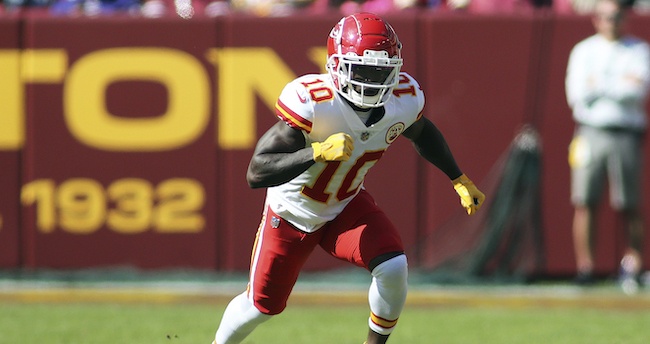 The Chiefs are struggling, no doubt about it. They pulled off a win over the Giants on Monday night, but nothing about it looked easy. And it won’t get easier here against the Packers. But from a fantasy perspective, Tyreek Hill is still among the very best options out there. He’s third among WRs in DraftKings points per game on the season and tied for first in targets (90) with Cooper Kupp. Green Bay is ranked 22nd in defensive DVOA this season and Hill should draw solid coverage options against this secondary.

His price has been climbing, but for good reason. He’s a WR1 on the season and when Jimmy Garoppolo is under center for the 49ers the numbers are just awesome for Samuel. In Jimmy G's starts this season, Deebo is averaging 10.5 targets and 126 yards per game. That’s about as good as it gets and he’s become one of the sneakier upside WRs in the whole game. This isn’t a great matchup but it’s hard to ignore this kind of volume in the passing game.

It’s a tragedy that occurred with Henry Ruggs this week and the young wide receiver won’t be playing football for some time, or maybe ever again. Renfrow is averaging more than seven targets per game this season. The yards don’t pile up, but he has been consistent throughout the season, averaging close to 13 DraftKings points per game. I think there could be an extra target or two this week and the price on both sites is palatable.

Strongly consider both DeVante Parker and Jaylen Waddle with the Dolphins facing off against the lowly Texans this week.

Gesicki wasn’t great in Week 8, but we should be able to target him in this matchup against the Texans. He is third among tight ends in targets on the season behind only Kelce and Hockenson with seven targets or more in four of the last six games. He is fairly priced on both sites and has a solid enough floor considering the position is mostly a mess. The sub-$5K number on DraftKings feels very safe.

The Eagles barely had to throw in Week 8, registering only 14 passing attempts from Jalen Hurts in their 44-6 evisceration of the Detroit Lions. But Goedert saw half (half!) of those passes with seven targets on the day. Zach Ertz is out of the picture and Goedert has 12 targets in the last two games. He’s put up nine catches for 142 yards in that stretch, The price is still too cheap on DraftKings.

Miami has not been a good defense this season, ranking 26th in DVOA. But luckily, the Houston Texans rank even worse on offense. They are currently dead last in the NFL in that respect. With that in mind, the Dolphins haven’t been priced up enough, on either site for this matchup. They aren’t generating a ton of sacks this season, but this is the kind of matchup to pile them on with Houston in the top third in the league at taking sacks. This is one where the matchup wins out over the team’s actual defensive prowess.

Unlike the Dolphins, the Cowboys actually are a very good defense this season. They rank 6th in DVOA and don’t allow the opponent a ton of time with the ball. The Cowboys, like Miami, don’t get after the quarterback a ton, but Teddy Bridgewater and company have allowed the third-most sacks on the season to opposing defenses.