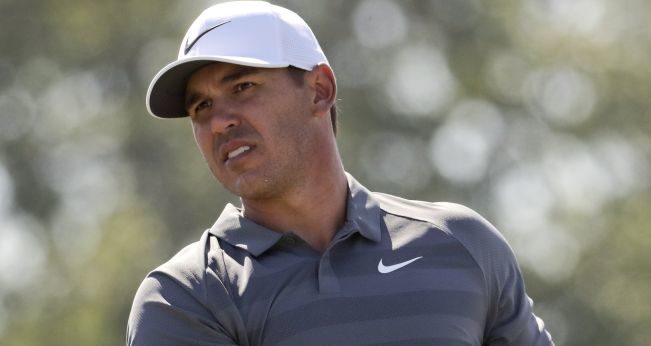 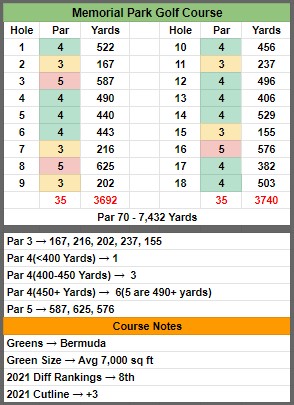 This week the PGA Tour returns to the US of A for the Houston Open and for the second season in a row, will be held at the Memorial Park Golf Course in Houston, Texas. Last season marked the first time the course had been used on Tour since the 60's and it was Carlos Ortiz hoisting the trophy with a winning score of -13.

This year's field is led by Brooks Koepka who is coming off a missed cut in Mexico and hasn't tallied a Top 10 since the OPEN Championship back in July. I wouldn't count him out, however, as he tallied a Top 5 here last year and was a consultant to Tom Doak in the renovation of the course before last year's event.

We only have a one-year sample size to try and build a stats model off of but one thing was clear, there were different ways to get it done. For instance, winner Carlos Ortiz was 43rd off the tee and 16th on approach but was Top 5 in both around the green and putting. Sam Burns finished T7 af89ter leading the field in ball striking but finishing 59th around the green and 89th putting. Brooks himself finished T5 and while he struggled with the irons(83rd), was 6th off the tee and 2nd putting.

My top stat this week will be Strokes Gained: Approach but will be looking at it in multiple different ways. I do want a player who is trending with their irons overall but with three of the five par 3's in the 200+ yard range and five of the par 4's coming in at 490 or more yards, I will be also keying in on Proximity ranges 175-200 and 200+ yards in my model. We also saw a very low fairways hit % last year but a slightly above average GIR rate so I will once again be factoring in Good Drive % into my model and then looking at some putting trends both overall and on Bermuda grass.

With that said, let's get into the picks.

This week I am starting with a player that checks every box and is #2 in my model behind Sam Burns(not factoring price) and #1 when looking at PTS/$ value. He has been en fuego to start the 2021-22 season with four straight finishes of T11 or better led by an elite iron game(7th on my sheet, 4th on FNGC). He now returns to Memorial Park where he finished T4 last year and was one of just a handful of players to gain strokes in every SG category. At these prices, especially on DraftKings, Gooch is my top play of the week in all formats.

Like Gooch, I am going back to the well with Wise again this week for many of the same reasons. He has been very solid to start the fall season with four finishes of T26 or better including two Top 10's and now returns to Memorial Park where he finished T11 last year. I mentioned last week how he used to be very inconsistent(to say the least) with the putter but has greatly improved and it showed last week as he was T95 in GIR but was able to secure a T15 finish with a hot putter. I love going with a balanced approach this week and starting a lineup with Wise and Gooch is right at the top of my list. Lock and load.

With the likely ownership with the above two golfers, I think we have a great opportunity to hitch our wagon to a low-owned/high-upside Russell Henley. While not great last week(T56), he has been scorching hot with the irons gaining 5+ strokes in three of his last five events and is 6th in this field in SG: Approach over the past 12 rounds. On top of that, he is 1st in Good Drive%, 10th in par 4 scoring, and 1st in Opportunities Gained in that same sample size. I don't think we need to go here in cash games with his extremely inconsistent putter but I love it for GPP, especially on FanDuel in the sub $10K range.

Throw your stats models out the window with this Hughes, well for the most part at least. He ranks outside the Top 100 in ball striking on my sheet but lost strokes on approach in eight of his last 11 events but comes in with a streak of 10 straight made cuts which includes five Top 25 finishes, and two Top 10's. While the ball striking is inconsistent his best range for the irons has been the long iron ranges and that fits right into what I am looking for this week. He also adds an elite around the green and putting game which propelled him to a Top 10 here last year. I am on board in all formats.

I have a very similar sentiment with McCarthy as I do for Hughes. They both rank well below average in terms of the overall stats model but do stand out in a few key areas. Both are elite or at least near-elite putters and both have been fairly consistent to start the year. McCarthy has already tallied two Top 10's and made three of his last four cuts and missed at the Shriners by one stroke. He is also 11th in this field in Good Drive % and 12th in SG: Around the Green. I like the PTS/$ floor here and would even consider using him in cash games if going the stars and scrubs route.