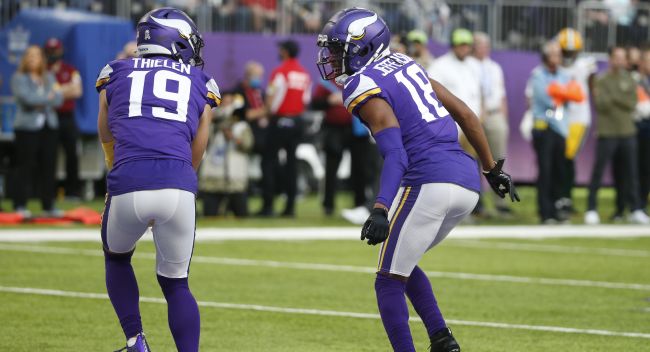 The 2021 NFL season is now in full swing and the DFSR team has covered with content all week long. Earlier in the week, we covered our top cash game plays and now it's time to look at some of the top stacks for GPP formats.

Doug mentioned both of these guys in his cash game article this week and not only do they give us a high floor and some projected safety, but they also provide a ton of upside. It starts with Hurts who hasn't been great with his arm(61%) but has more than made up for it with his legs averaging over 10 rushing attempts 56 yards per game which are both second to only Lamar Jackson. While the passing has been inconsistent, he has tallied five games with multiple passing touchdowns and did have two 300+ yard games earlier in the season.

It's the run game where I think the biggest upside lies as the Giants rank 30th in DVOA vs the run and have yet to face a true rushing threat from the quarterback position. Pairing him with Sanders has the upside of 150+ rushing yards combined and it was nice to finally see something from Sanders who ran for 94 yards on just 16 carries last week(5.9 per rush). More good news as the price continues to sit in the low $5K range on DraftKings while he has the upside of a 6-7K back.

If multi-entering and want multiple Eagles stacks this week, I love adding in some passing game action with Dallas Goedert and Devonta Smith. Goedert will be the chalkier option as Hurts top option lately and the Giants have struggled vs. tight ends recently.

There is a lot of terrific pay-up options this week so if you are looking to leverage a bit and pivot to a lower owned stack, the Vikings pass game makes a lot of sense.  First of all, I don't see Dalvin Cook getting a lot of room to operate on the ground as the 49ers are an elite run defense that ranks 3rd in DVOA vs the run and have allowed the 6th fewest total yards to running backs on the season.

This sends me instantly to the #2 DVOA passing offense this season led by Kirk Cousins who has thrown for multiple touchdowns in four of his last five and 294+ yards in three of those games. He comes in ranked 7th in passing yards and 5th in accuracy among starters and has one of the best 1-2 WR tandems in the league. For upside and probably lower ownership, I prefer Justin Jefferson who is coming off two mosnter games where he has caught 17 of 21 targets for 312 yards. He comes in 4th in receiving yards while averaging just under nine targets per game thanks to an elite 71% catch rate.

This is a perfect sceanario for GPP as we get a very high upside stack in a plus matchup and both players could be outside the Top 10 in ownership at their positions. Skol Vikings!