The Bills are still fighting for both a playoff berth and the AFC East. Even though they are -14.5 home favorites against Atlanta, this is very much a must-win game for Buffalo. And in terms of fantasy scoring, almost no one has done it better than Allen this season. He ranks behind only Cooper Kupp in DraftKings points on the year and is top amongst quarterbacks. The Falcons are the second-worst defense in the league this season, giving Allen a pristine matchup. And they also allow the 7th-most opponent plays per game as well. In terms of floor, this is the best play QB play on the slate. I think he will be a popular play here and for good reason.

I actually think that in terms of safety, there is a big drop-off after Josh Allen here. As of this writing, he’d be who I ran in cash on both sites. That being said…

I don’t like to offer up non-running quarterbacks in cash all often unless they are going super cheap, but that’s just not the case with Brady. There is a narrative piece here that I do think could come into play for Tampa Tom. He is currently listed as second in MVP odds behind Aaron Rodgers and I do think, in this case, it kind of matters for Brady to continue piling on the stats. He’s had a couple of down games, but he leads the league in passing yards and touchdowns. At 12-3, Rodgers and the Packers are favorites, but Brady could make a case over the last two weeks if they want to run up the score and pass a ton. I’m not usually narrative guy, but in this case, I think I can see a path to a big game. 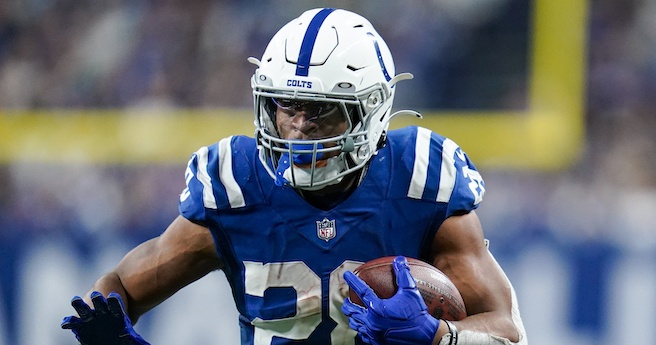 Warning: There are tons of solid/ great running back options this week. I think there are 6-7 ways you can conceivably go in cash.

Sure, the price is through the roof but it’s for good reason. Taylor is having a truly remarkable season with nearly unmatched usage. Over the last six weeks, he’s averaging a whopping 26 carries per game for an average of 134 yards on the ground. These are video game numbers for the running back. He and the Colts are -6.5 home favorites against the Raiders and they should lean on Taylor once again. Taylor is the top-scoring running back on DraftKings by nearly a hundred points more than the next-closest guy. I think he easily warrants the pay-up in this situation with the DraftKings price looking like a value especially.

Darrell Henderson has gone on IR and we’ve seen what that means for Sony Michel in the Rams’ offense. Last week he played 90% of the snaps and carried the ball 27 times total. Throw in four targets and he had a completely elite usage day. Expect more of the same against Baltimore with the Rams signaling that he is an every-down back now. The price hasn’t caught up to this kind of usage especially on DraftKings where he's way too cheap considering how much he's also used in the passing game.

With Leonard Fournette out last week, Jones got the bulk of the work in the backfield for the Bucs. He carried the ball 20 times and saw three targets in the passing game on 52% of the snaps. It’s that latter number that scares me just a little bit in this situation considering we saw Ke'Shawn Vaughn plays 36% of the time and he also broke a long run for a touchdown. But I think this is still Jones’s game to run downhill in against a Jets team That ranks dead last in DVOA and dead last against the run.

Harris is coming off a monster, three-touchdown game in Week 16. He carried the ball 18 times for 103 yards, getting all of the down and close usage you love to see in fantasy. The Patriots are huge, -15.5 favorites in this game against the Jaguars who are among the worst defenses in the league this season. It stands to reason the Patriots will be running downhill the whole time meaning we could be in for another huge game from Harris. The only difference in this game compared to the last one is that Rhamondre Stevenson is back which could cut into Harris’s usage. I still think Harris is the play, but that’s the only reason I’m pumping the brakes just a bit.

If James Conner is out again then Chase Edmonds becomes pretty much a lock in cash games. We need to wait on that news though.

David Montgomery also looks like a great option against the Giants.

With Mike Evans and Chris Godwin out of the mix for the Bucs in Week 16, things went according to plan with Antonio Brown’s usage. That is to say, he got a lot of it. He had a whopping 50% target share from Tom Brady, getting 15 targets on 30 passing attempts. This is a crazy stat and to say Brady was looking AB’s way the whole game is an understatement. Even with the price jump on both sites, Brown is still a WR1 on this slate. Godwin is out for the year and Evans is dealing with knee and Covid issues right now. Even with Tampa Bay a huge favorite, it’s tough to fade Brown in cash on this slate.

If Mike Evans were to sit again then I think Grayson is actually in play on this slate considering his price point. With Tampa Bay short on pass-catchers last week, Grayson played 79% of the snaps, saw three targets for 81 yards, and had a carry as well. It’s not overwhelming production, but another week of getting comfortable in the offense and I think you could see this tick up a bit.

Target leaders over the last four weeks? Cooper Kupp and Justin Jefferson are tied at 51. Number 3? Amon-Ra St. Brown with 46. It’s been quite the second half of the season for St. Brown who has touchdowns in three of his last four games and has 340 total yards in that span. Seattle’s defense ranks 26th against the pass this season and St. Brown has gotten it done with a couple of different quarterbacks. He’s priced under the elite group, but he’s performing as well as anyone in that tier.

In the last couple of weeks with DeAndre Hopkins out of the mix, Christian Kirk has stepped with a bigger target share. He has 21 total targets over the last two games, good for 16 catches, 142 yards, and a touchdown. We’ll take that at production at these prices and I think he makes for a very good middle-tier option at something of a weaker position this week. This game has one of the higher totals of the slate as well and could turn into a shootout.

Like Kirk, Ertz has been a beneficiary of not having Hopkins in the lineup. In the last two weeks, the former Eagle has averaged 12 targets, good for an average of 7 catches for 69 yards. He doesn’t have any touchdowns in that span, but there were two red-zone looks. I love the price point here considering the usage he is getting with Murray under center. There are a few Cardinals who make for good cash game options even going up against the Cowboys mostly because the former could be missing critical parts of their offense.

Jack Doyle is looking very doubtful for this game which could open the door for more Mo Alie-Cox targets. He draws a great matchup for that to potentially happen with Las Vegas allowing the third-most fantasy points to tight ends this season. MAC would make a for a cheap DraftKings at a position that often makes sense to punt in cash considering the price discrepancy.

The Bears come in at a very nice price on DraftKings facing off against a Giants team that has pretty much been hot garbage all season. Big Blue has topped 13 points just once in the last six weeks, is on backup quarterbacks, and is just kind of a mess. Chicago hasn’t been great shakes on defense this season by any stretch, but this is the matchup and price we are playing here.

There are a ton of teams with good defenses facing off against really bad offenses this week, but you will have to pay for them. It might be worth it considering some of these spreads. The New England Patriots are up against the Jaguars who have a 12.75 implied total. That’s about as low as you’ll ever see.

Meanwhile, the Tampa Bay Buccaneers and their 7th ranked D are up against the Jets with a rookie quarterback who’s looked shaky all season.

Finally, Buffalo and their 2nd-ranked defense are facing off against the Atlanta Falcons who are the fifth-worst offensive team in DVOA on the year. Buffalo at $4500 on FanDuel is one of the better top-tier bargains this week.