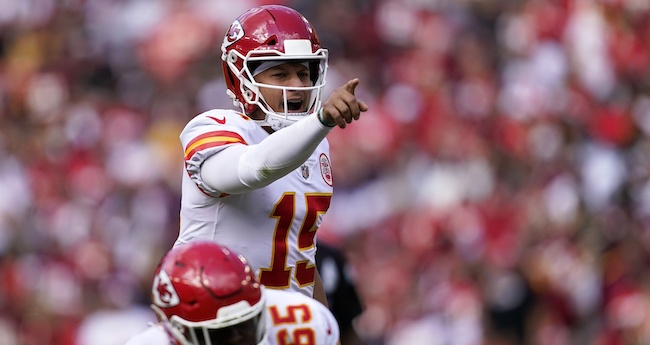 We are usually talking about motivation for teams in the final week of the regular season but so many teams are either still fighting for a spot or positioning. The Chiefs are in the latter category as they come in as the #2 seed with a shot at the #1 but also a shot at finishing #3 or #4. The good news is the offense has really turned it up down the stretch as they have scored 30 or more points in four straight led by Mahomes who has thrown for 250+ yards and multiple touchdowns in each of those games. The matchup isn't that bad either as the Broncos come into the final week of the regular season ranked #20 in DVOA vs the pass. All things considered, Mahomes is my top play at the position on Saturday.

Both the Eagles and Cowboys have clinched a playoff berth but both can improve their seeding so I fully expect to see the starters throughout. I fully expect Dak to be higher owned as he easily has the better weapons so for GPP formats, I prefer a lower owned Hurts. While he hasn't been nearly as consistent as he was earlier in the season, he has still provided a nice floor with his legs alone and could be relied on even more in that department this week with Sanders out with injury and Scott/Howard on the Covid list. With a chance of being the third-highest owned QB on a two-game slate, I love the play for GPP formats.

With Edwards-Helaire ruled out for a second straight week, Darrel Williams will once again be the lead back for the Chiefs. He out-snapped Gore 49-8 last week and was terrific rushing 14 times for 88 yards(6.3 per rush) with two touchdowns and added another three catches for 19 yards. He now faces a Broncos defense that ranks 22nd in DVOA vs the rush and is coming off a game where they gave up 112 scrimmage yards and a touchdown to Austin Ekler and another 61 scrimmage yards to Justin Jackson. I have the floor at around 15 touches with upside of 20+ in this game and that easily puts him as our #1 running back on Saturday.

I mentioned the Eagles being decimated at the running back position and as of Thursday, Gainwell is the only healthy back on the roster with a touch this season. There is a slight chance Scott and Howard clear protocols by Saturday but let's assume Gainwell starts, I think he likely sees a 12-15 touch floor which is more than we can ask for from a player priced in the $4K range on both sites. That price also helps us pay up for Mahomes and allows us to easily stack him with either Hill or Kelce. Stay tuned for more news but if Gainwell starts you can sign me up in all formats.

With all the value that is currently available on this two-game slate it is going to be hard to not stack Patrick Mahomes with one of his big-two pass catchers. Both have tougher matchups as the Broncos are Top 10 in fantasy points against both wideouts and tight ends but I lean Hill who has been slightly more consistent in the short term(double-digit DK points in three of his last four). Some might be worried the Broncos shut him down in Week 13 but it was more about not needing Hill(5 targets) in a low-scoring 22-9 win than him being "shut down", in my opinion. Either way, I see Hill with an 8-10 target floor with room for upside. He is our top projected non-QB and in play in all formats.

Both games on Saturday are division matchups and have the potential to be lower scoring but if I was a betting man I would feel more confident putting my money on the over in this game. Both teams are locked into the playoffs and playing for position and maybe more importantly for the Cowboys, trying to get back into a rhythm going into the playoffs. Lamb is likely to move back to the outside more with Michael Gallup out and Cedrick Wilson likely taking over that slot role. While I will have a near split of Lamb and Cooper in the same price range it is splitting hairs as whoever avoids Darius Slay coverage the most will come out ahead, in my opinion. I do slightly lean Lamb as he has been more consistent recently with 50 or more receiving yards in five straight games. For value, I also love locking in the aforementioned Wilson who will step into the slot role with Gallup out for the season. He stepped in last week and was very productive catching all six targets and scoring a touchdown. For cash games, I would say Wilson is my favorite of the three wideouts as it leaves you a ton of room to roster Mahomes and one or both of Hill and Kelce with him.

I am going to lump these two together as I am split on them in my lineups where I will avoid the obvious play of Travis Kelce. Let's dive right into Schultz first as he has been the more consistent option recording double-digit DK points in five of his last seven games while averaging just over 13 per game. He also gets the much better matchup as the Eagles have allowed the 7th most receiving yards, 2nd most touchdowns, and 2nd most fantasy points to the position.

For Fant, this is more of a GPP spot for him with Kelce and Schultz likely the clear chalk plays. The good news is that he is coming off one of his best weeks of the season catching six of seven targets for 92 yards and a touchdown. It was also the third time in four weeks he has tallied 50 or more receiving yards and double-digit DK points. I am projecting the Broncos to throw a little more than average in a come-from-behind game script and the matchup is on the plus side s the Chiefs have allowed the 13th most receiving yards and fantasy points to tight ends.