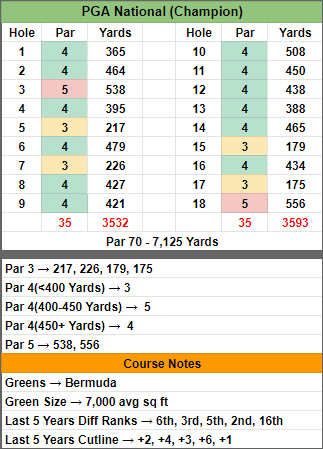 The Florida swing gets underway this week as the PGA Tour heads to the PGA National(Champion Course) for The Honda Classic. After seeing each of the Top 10 in the Official World Golf Rankings last week at the Genesis Invitational, we see none of them this week and just 12 of the Top 50 teeing it up at one of the toughest courses on Tour. That is partly due to the Bear  Trap(Holes 15-16-17) which is the fourth hardest three-hole stretch(non-majors) dating back to 2007. There is an abundance of water(ask Ryan Palmer who has 17 water balls on the Bear Trap) which puts an emphasis on precision tee to green.

On these tough scoring courses with danger lurking at every corner, it takes a full tee-to-green game if you want to be on the leaderboard on Sunday and contend for a win. For fantasy, here are a couple of my top-weighted stats in my model:

This is a very broad stat in my model that can be broken down different ways for different courses. This week, it starts with Strokes Gained: Off the Tee with danger lurking seemingly everywhere and driving accuracy(fairways gained on Fantasy National) should be the focal point. The boost important part and highest weighted part of my ball striking model is Strokes Gained: Approach which is highly correlated to winning year after year. Breaking it down a little further, I am looking at Proximity ranges from 150-175 and 175-200 yards which makes up almost 50% of all approach shots here at PGA National.

There always seems to be much more variance in putting round-to-round and event-to-event but what I am looking for here is two things. First, I want a player who is trending well with the putter int terms of say last 12-14 rounds(FNGC model) vs long-term averages(on my sheet). I am also looking closely at players splits on Bermuda and not to the point where I will lock or X players because of it, but looking more for trends vs. other grasses.

The overall lack of top talent in the field has pushed Im to the top of the salary on both sites this week. While that may seem crazy, we are entering the "Sungjae Swing" in Florida so maybe he is actually underpriced(lol). Seriously though, he finished T8 here last year, won the event in 2020, and over the last 50 rounds in the Florida Swing(TPC Sawgrass, PGA National, Innisbrook, Bay Hill), Sungjae ranks #1 in Strokes Gained: Total, #2 in Strokes Gained: Tee to Green. Then you look at form and he has been terrific this season making eight of nine cuts with a win(Shriners), four Top 10's, and six Top 25 finishes. All things considered, I am willing to pay up for Sungjae's elite combo of form, history, and stats in this weaker-than-average field.

Another former winner of this event is up next and what I like most and likely drives up the ownership, is the fact you can play him with Im fairly comfortably or build a balanced core with him leading the way. The fact he was won here before isn't what jumps off the page rather it's his form as he comes in with a T12 or better in four of his last five events and ranks(in this field) 5th in SG: Tee to Green, 2nd in SG: Ball Striking, and 8th in par 4 Scoring over the last 24 rounds. Putting can often be his downfall but the good news is that he has been consistent lately ranking 24th in this field(+6.8) in Strokes Gained: Putting over the last 24 rounds(via FNGC). I will have exposure in all formats

If you have been reading my articles all season, you have to come to realize I am all aboard the rookie train. Cameron Young shot to the top of the rankings with a T2 last week but Moore has kept in touch with some very consistent recent form of his own. He has not only made the cut in four of his last five events, but has a top 10(RSM Classic) and comes into this week with back-to-back Top 25 finishes at the Pebble Beach Pro-Am and the Genesis Invitational. Most impressive there was that he gained strokes in every SG category at Pebble and all but one(ATG) at the Genesis. It will be his first Florida swing on the PGA Tour but the good news statistically is that he is accurate off the tee(27th in FW gained last 24 rounds) and also excellent at avoiding bogeys(8th in Bog Avoid on sheet). Lock and load in all formats.

It's going to be an interesting week when Lucas Glover is Top 10 in my model. Seriously, however, he checks all the boxes starting with his consistent course history as he returns to PGA National with Top 25 finishes in for of his last five trips and ranks 15th in this field in SG: Tee to Green over the last 24 rounds here. It really comes down to his precision ball striking as he is very accurate off the tee(14th in Div Acc, 12th in Good Drive %) and on approach(3rd in GIR, 25th in Prox, 14th in SG: APP). The floor is high and the upside is there if he can find a hot putter like he has here in the past. I will have exposure in all formats.

I will admit, I am probably going to be underweight on Glover should his projected ownership really take off by lock and if that happens one player I will pivot to is Sigg. Yep, another rookie on my radar and what I like best is two-fold with both ownership and price staying suppressed until an explosion performance(aka Cameron Young last week). Sigg has been consistent(made 8 of 11 cuts) but has yet to have that breakthrough(two Top 25 and T22 best). He ranks well in my ball striking model(18th), is 19th in this field in Par 4 Scoring, and 5th in Bogey Avoidance. A recipe for success here at PGA National. At a projected sub 10% ownership, we don't need a ton of Sigg for it to pay off but I am all about the get-in-early on these young, relatively unknown players.

If you are heavy on Sungjae this week you are likely going to frequent this range early and often. Ryan Armour is one that stands out checking almost every box starting with his 2022 form as he comes in with a T28 at Pebble Beach and T20 at the Sony Open on the back of some terrific ball-striking gaining strokes both off the tee and on approach in both events. He has some very up and down course history but the good news is the ups have mostly come recently as he has made the cut in two of his last three trips with a  T12 in 2019. Solid value on both sites this week.