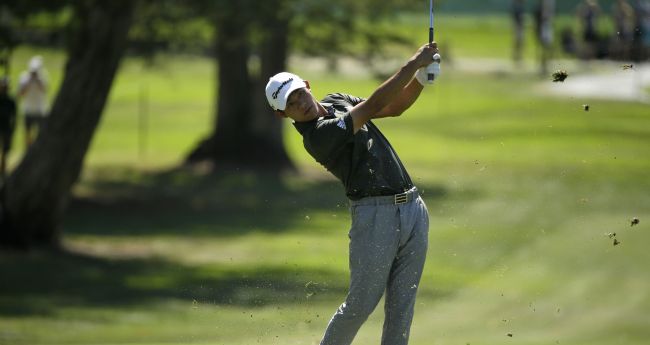 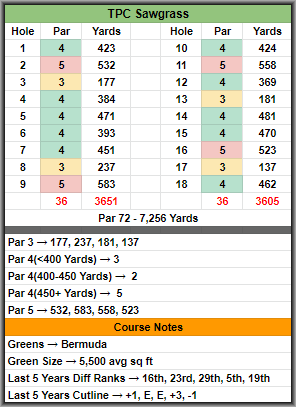 This week the "strongest field in golf" heads to TPC Sawgrass for the (all caps)PLAYERS Championship. Last year, it was Justin Thomas hoisting the hardware with a spectacular tee to green effort where he gained 13 strokes on the field. The only reason Lee Westwood, Bryson, and others had a chance was the JT's average putter(+1.6 or 52nd in the field). When looking at the strokes gained data, it was an almost identical win for Rory in 2019 as he gained 13 strokes tee to green en route to winning while finishing 56th in SG: Putting. While we do have a very strong field, it is not categorized as the "toughest" in terms of scoring as it has only ranked inside the Top 15 hardest courses once(2017) in the last five trips to TPC Sawgrass.

The field is even stronger than last year as all of the Top 10 and 48 of the Top 50 players in the World will be teeing it up at TPC Sawgrass this week. The course is a Pete Dye gem that, like almost all of his designs, comes with tight fairways, lots of doglegs and hazards forcing accuracy and with TPC Sawgrass in Florida, that means a ton of water(in play on 17 holes). Overall, it is going to take a strong all-around game to beat the best players in the world but below I will go over a few of my key stats in the model this week.

Let's start with Strokes Gained: Off the Tee and it's really all about accuracy and positioning as only seven players out of 41 who have finished Top 10 in the last two trips to TPC Sawgrass averaged over 300 yards off the tee. Like I mentioned above, you need to not only avoid the dangers(sand, water) lurking outside the narrow fairways, you also need to position yourself to have a shot at the smaller-than-average greens. With the fairways hit average lower than average here, I will also be looking at the Good Drive % stats, as well.

That leads us to Strokes Gained: Approach which is my top stat almost every week and especially this week where it ranks very high in terms of correlation to success in my research models. Players finishing inside the Top 10 have averaged about 4% more greens in regulation than those who made the cut and about 5-6% more than the field. Of that same group finishing Top 10 in the last two trips to TPC Sawgrass, only four have ranked outside the Top 50 in Strokes Gained: Approach.

Breaking down the stats over the last two trips to TPC Sawgrass, par 4 scoring has nearly doubled in correlation when compared to par 5 scoring. The par 5's all play well under par annually while only one par 4 played under par last year(#12) and just two(#1, #12) back in 2019. Breaking it down further into distance splits, there are five par 4's over 450 yards and three over 470 yards.

The other factor this week is going to be weather as there is both wind and rain in the early forecast. Stay tuned to chat and the cheatsheet for updates as we approach lock.

The unofficial "5th major" is treated much like the four majors in terms of pricing, at least on DraftKings where everyone is about $500-$1000 below their average price throughout the season. This opens the door for almost every single lineup build and also helps spread the ownership out. I pay much less attention to ownership in these events than regular PGA Tour events and concentrate more on just narrowing down my player pool in each price range.

With that said, join me as I go over a few of my favorite plays for the week, and then stay tuned to the cheatsheet where I will have my final plays, ranks, and notes posted Wednesday evening.

The field is stacked with elite players making the decision at the top nearly impossible. I am personally playing about 20-50 lineups this week and will have exposure to multiple players in this tier but my favorite is Morikawa. He finished T41 here last year after struggling around(-2.2) and on the greens(-2.1) but looked terrific in round 1(68) back in 2020 before the event was canceled. What draws my attention the most here is that he has been elite in terms of ball-striking(5th in the field last 12 rounds, 2nd on my sheet) and has seen the putter come around gaining strokes in four straight events. In those events, he has finished Top 10 in all of them while finishing runner-up twice(Genesis Inv, CJ Cup). Everything seems to be coming together at the right time for Morikawa and he is my top DFS play this week on both sites.

Speaking of everything coming together at the right time, Matt Fitzpatrick has been on a heater of late as he comes into this week with three straight Top 10 finishes(Pebble, WMPO, API) on the PGA Tour in 2022. The success has come on the back of a complete all-around game as he has gained 14.2 strokes tee to green and 9.3 strokes putting in those events. He now comes back to TPC Sawgrass where he impressed with a Top 10 last year after a T46/T41 in his first two trips back in 2018 and 2019. He checks all the boxes as an elite ball-striker(10th in SG:BS on sheet), elite putter(4th overall and #1 on Bermuda on sheet), has red-hot form, success on this tough course, and comes in the mid-range on both sites. Fire up Fitz in all formats and even consider an outright bet in the +4000 to +5000 range.

After a rough stretch where he missed three cuts in four events, Conners bounced back in a huge way at the Arnold Palmer leading the field in Strokes Gained: Tee to Green and finishing with a T11. He now returns to TPC Sawgrass after an impressive Top 10 last year(T7) and has now made the cut in both trips(T41) and it comes as no surprise as he ranks out very well in my Pete Dye model(via FNGC) ranking 3rd in Strokes Gained: Tee to Green and 12th in Strokes Gained: Total over the last 24 rounds. I will have Conners in my player pool on both sites but love the play much more on DraftKings where he is over $1,500 cheaper than his season average price. Lock and load!

Things were rolling along nicely last week at the Arnold Palmer Invitational where Gooch was in contention heading into the final round. Then came the meltdown on the greens where Gooch lost over two strokes to field but in tough conditions for everyone, he still end up with his fourth Top 10 finish of the season. He has been one of the more consistent players on Tour as he has made the cut in 11 of 13 events with a Tour high eight Top 25 finishes. He also has experience here to fall back on as he missed the cut badly in his first trip in 2019 but really impressed last year with a Top 5. All things considered, he is one of my top PTS/$ values on DraftKings this week in all formats.

When looking at my odds to salary differential tool, there are a ton of players who stand out this week with the deep field but no one stands out more than Chris Kirk. He returns to TPC Sawgrass making the cut at the PLAYERS in eight straight trips with three Top 15 finishes and now comes in with tremendous form having finished T5(Arnold Palmer Inv), T7(Honda Classic), T14(Phoenix Open) in his last three events. In those three events, he has gained strokes in every strokes gained category in all three, thus ranking 7th in this field in SG: Tee to Green over the last 12 rounds. All things considered, he is far too cheap to ignore for DFS. Fire him up in all formats.