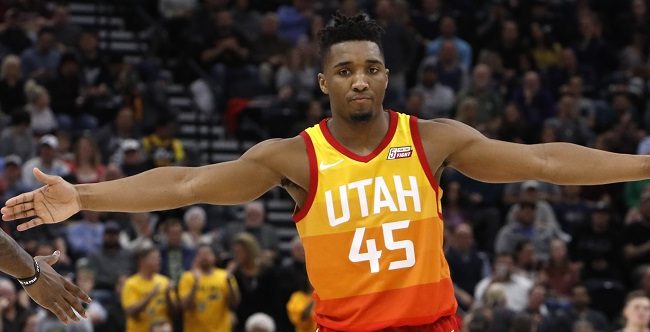 The Mavs are going to be without Luka Doncic in this game and it’s going to be uphill sledding against the Utah Jazz, at least for the first game or two. It stands to reason that Brunson, at least to start, will take over a significant amount of the offensive load. With Doncic off the court this season, Brunson has a 27% usage rate, the highest on the team among the remaining Mavs. He’s a candidate to play a lot of minutes as long as the game stays close and much of the production will go his way. Yes, the price had time to climb on the back of the injury news, but it likely didn’t move enough here even in a tough matchup.

Along the same lines, it sure seems like Dinwiddie is in line to start here or at least play a ton of minutes off the bench. Of course, the Mavs could go with a setup that exists a bit more about Brunson’s offensive engine (such as it were), but they have almost no other offensive creators at this point. It makes it seem like Dinwiddie would then be in line for a bunch of minutes almost no matter what. The run wasn’t there for him down the stretch of the season, but this was a very different Dallas team. I think in this case we can consider paying something of a premium on his production. The DraftKings price is much easier to stomach.

The Mavericks are going to be without Luka Doncic and, from a game perspective, that’s going to put the Jazz in an extraordinary spot to take advantage early in this series. We should see Mitchell work to put a stamp on this thing early and there’s a good chance that if the game is close he pushes towards 40 minutes. This season he averaged 26 points and five assists, though we did see something of a dip in the efficiency overall. I’m willing to put some of that off to the side as we enter the playoffs and the stakes are raised. Mitchell has shown himself to be a high performer on this level and the price is just a bit too low on both sites.

Considering the way they played the regular season, one would have to figure that Nick Nurse runs the Raptors starters 40+ minutes in every game for this series. VanVleet is a prime candidate in this respect and that’s been the case with him while healthy. He struggled over the last month or so, in and out of the lineup because of injury and not hitting much from the field relative to his career averages. There’s no guarantee he’s fully healthy here, but one would think there should be at least a little regression on the shooting. The price has taken a dive because of the struggles and I think we are getting him at decent discounts on both sites.

Why is he still listed as a SF in some spots? No one knows. These playoffs are likely to be a referendum on James Harden and the trade Philly made for him in general. It’s going to be fascinating to watch play out and this first game against the Raptors won’t be any great shakes for the Philly point guard. Toronto will try to wear him down. But I still think he’s coming too cheap to start things off here and there’s every reason to think he runs close to 40 minutes with Philly likely wanting to put a stamp on this series early. He played about this number down the final stretch of the season, averaging 16 points, 13 assists, and six rebounds. Obviously, the scoring is a disaster at these price points, but there was definitely some run bad on the three-point shooting during that time that I do think comes back to life here.

It can be tough knowing which way to go with the non-Jokic Nuggets guys considering the love and wealth can get passed in different directions over the course of the season. But I do think the plan for the Nuggets in close games is to play Barton a bunch of minutes considering his versatility on both ends of the court and the ability, at times, to create some offense on his own. He scored 16 or more points in six of the last eight games of the season and was able to get after it on the glass while also handing out some assists as well. The line is balanced enough that these prices play in cash games. I like the FanDuel salary a bit more for obvious reasons, but I actually do think that Barton is pretty safe here.

The Raptors don’t have a ton of functional ways to limit Embiid here especially considering they want to go wing-heavy throughout. That’s going to make for an interesting chess match between the two teams, but I don’t think it’s going to cut into Embiid’s production all that much. He averaged 29 points and 11 rebounds against the Raptors during the regular season and one would need to think that he’s going to run at least 36-38 minutes with Philly needing no real reason to manage the run at this point. Sure, he’s expensive on a slate where it’s tough to save, but he’s also among one of the best in the business at this point.

It sure seems like Rudy Gobert is going to play a lot of minutes in these playoffs in the right matchups, and the Mavs without Luka Doncic lines up as one of those games. Without the Mavs really being able to exploit him meaningfully around the perimeter, there should be a lot of run for Gobert who averaged a whopping 18 points and 15 rebounds over the final stretch of the season. He was a beast and has such a high floor considering the Jazz will be hard-pressed to take him off the court in this series. Gobert is also averaging two blocks+steals in only 32 minutes over the last two weeks of the season. This is just too good of a deal even for a dude who doesn’t have much in the way of a dynamic offensive presence.

The Grizzlies were careful with Jaren Jackson’s minutes this season for a few different reasons. For starters, they played in a bunch of blowouts which meant they didn’t have to push starters all that much. Additionally, there were too many times this season that Jackson found himself in foul trouble, buzzing off the minutes and getting him out of the cash game mix. But now that we’re in the playoffs I think we things press up some for the dynamic wing/ big who’s among the best defenders in the league. JJJ averaged 16 points, 5.8 rebounds, and 3.2 blocks+ steals on the season, the latter stat among the very best in the league, especially among non-centers.