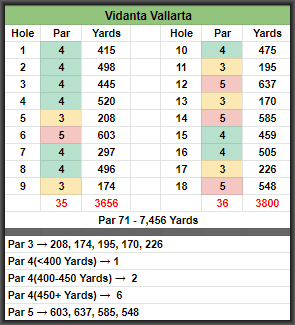 Welcome back golf fans. After some near-flawless execution by Patrick Cantlay and Xander Schauffele in the Zurich Classic team event, the PGA Tour travels to Mexico for a new event on the schedule, the Mexico Open. With an early withdrawal from Daniel Berger, this may go down as one of the worst fields in recent memory. It is, however, led by World #2 Jon Rahm but consists of just 14 of the Top 100!

I won't deep into the course as we don't really have a ton of data. I did watch a preview show from "Tap it In" on YouTube and pulled these notes:

With that, I am keeping things simple and as always, looking for players who are trending in ball striking both in the short-term and long-term and will also add in some distance off the tee and long iron proximity into my model.

Let's get into the picks!

Given this ultra-weak field, I fully expected to see Rahm in the $12K range on DraftKings but that is not at all the case so I will be centering my core build around him this week in Mexico. The form isn't exactly where I would like to see it as he has gone four straight events without a Top 10 struggling around and on the green but he is still the class of this field and ranks at the top or near it in every statistical category. He is a very hard fade if playing one or limited lineups and if multi-entering, I could see the case for fading. I will not be!

The early 2022 struggles for Wise(three MC and a T67 first four events) were a bit of a surprise coming off a very solid fall season. The good news is that he has found his form again making the cut in three of his last four events with two Top 25 finishes while gaining 21.5 strokes tee to green in total. He isn't the longest player on tour but is definitely above-average which should help a ton on these long Par 4 and 5 holes. Despite losing 2.1 strokes on approach at the RBC Heritage, Wise's iron game has been good lately as he gained at least 1.7 strokes in four of his previous five events and is 9th in this field in Proximity and 27th from 200+ yards over the last 24 rounds. All things considered, Wise is my favorite non-Rahm play this week and I will have exposure in all formats.

According to my odds to pricing differential on the sheet, Smotherman is overpriced but I just can't ignore the ball-striking this season. He has played nine events that track strokes gained with shot tracker and Smotherman has gained strokes both off the tee and on approach together in six of those events and overall strokes ball-striking in all but one.  In this field, he ranks 4th in SG: Ball Striking, 3rd in SG: Approach(Top 6 in both prox ranges in model), Top 15 in distance gained, and 5th in Par 5 scoring over the last 24 rounds. The PTS/$ upside is there if he can even putt field average so I not only like for DFS this week but will also be placing a Top 10 and Top 20 bet on him.

After Rahm, almost all of my plays this week would be considered GPP only for me most weeks but this is no normal week. Despite the field strength and the fact Duncan is coming off an impressive T12 at the RBC Heritage, he is still cheap and one of my favorite values this week. The form goes back further, as well, as Duncan has made the cut and finished T35 or better in four of his last five events. He ranks(in this field) 10th in SG: Tee to Green, 4th in overall Proximity(12th from 200+ yards), and is Top 30 in both Par 4 and 5 Scoring. Add it all up, and I will have exposure to Duncan in all formats this week.

Ii can't help myself but to try and fit in at least one Canadian each week and this week Svensson is the top-priced of the six Canucks and also my favorite of the bunch. He hasn't been completely consistent in the short term missing three of his last five cuts but has made seven of 10 in 2022 and shown some big upside with two Top 10 finishes. What he lacks in distance, which would be an advantage here, he more than makes up for with a trending long iron game as he ranks 7th/20th from 175-200 and 200+ yards over the last 24 rounds(via FNGC). I am on board in all formats.