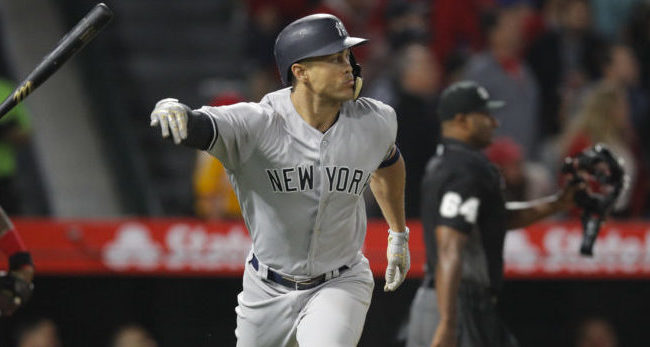 All of the ace pitchers were on the mound over the weekend but good news for the Brewers as they seemingly have three of them in one of the best rotations in baseball. Peralta takes the mound on Monday and has been terrific lately holding opponents to just 15 hits and five earned runs(2.08 ERA) over his last four starts with 28 strikeouts(32.2%) and five walks(5.7%). While the matchup against the world champs doesn't appear great at first they are just league average in terms of wRC+(100) on the season and have seen their strikeouts go up recently(26%), as well. Peralta is our top projected pitcher and in play in all formats.

One thing that was a nice mix with all the elite pitching over the weekend was all the cheap SP2 options and we get more cheap options on Monday. My favorite of the bunch is Kikuchi who opens as a -165 favorite against his former team who have been trending down in the short term with an 87 wRC+ and 27% K rate over the last week. For Kikuchi, it has been the opposite trend as he started the season slow but comes in red-hot having given up just five hits and three earned runs over his last two starts, both against the Yankees, while striking out 14(33%). All things considered, Kikuchi is my favorite SP2 on DraftKings allowing us to stack some big bats.

Let's get the bats started with a matchup in Coors which checks all the boxes from a Giants perspective. It starts with the matchup as they face Senzatela who has given up at least seven hits in all six of his starts while tallying just eight total strikeouts. This means a ton of hard bit balls(7+ in five of six starts) and when looking at the splits, we can attack from both sides as he has given up a .400+ wOBA to lefties and righties. For Belt, he hasn't been as consistent as we would like(.253 avg) but he has been productive for fantasy with four home runs and a 136 wRC+ and has been a bit better in the short term with hits in four of his last five games. He may not be a lock on FanDuel at nearly 4K but at his current DraftKings price, I will have a ton of exposure in all formats.

Whenever I get the chance to write up my favorite player I am going to take it. In all seriousness, I am much more focused on Vlad tonight when it comes to FanDuel as he comes in as the 9th most expensive first basemen on the slate. I get it hasn't been the MVP-like start to the season but he is still hitting .280 with seven home runs and 20 RBI. He also comes in with hits 12 straight games which is the third-longest current streak in baseball. To top it off, the Jays get a matchup against Chris Flexen who struggles much more against righties with a .359 wOBA against(.282 vs LH) and gives up around 15% harder contact in the split. Load up on Vlad in all formats on FanDuel tonight and even consider as a lower owned GPP option on DraftKings.

While LeMahieu is no longer the two-time batting champ, he is still getting a ton of opportunities hitting at the top of one of the best lineups in baseball. He comes into this game with a solid .274 average and .356 on-base percentage and has scored 19 runs ahead Judge, Rizzo, and Stanton. The matchup is just average on paper as rookie Kyle Bradish has been decent to start the season but has given up a home run in each of his three starts and has been considerably worse against righties with a .278 average and .371 wOBA against(.217 avg, .250 wOBA vs LH). With a price that remains in the mid-tier on both sites, LeMahieu is my top play at second tonight in all formats.

If you are looking for value on the right side of the infield, look no further than Michael Chavis who should get the move up the Pirates lineup in a plus matchup against a lefty. That lefty is veteran arm Wade Miley who looked pretty bad in his first start giving up five hits, five walks, and three earned runs in his first start of the season. Chavis is someone who always comes cheap as a platoon hitter but has been very good against lefties with a .363 wOBA, 130 wRC+, and .253 ISO since the start of last season. I will have exposure in all formats.

The White Sox get an average-at-best matchup tonight against Brad Keller who has been solid to start the year but this pick is much more about Tim Anderson. He is one of the most consistent hitters in the league and has not only reached base in 24 of 29 games but also has 13 multi-hit games giving him an elite .336 average(4th best in baseball), .382 wOBA, and 160 wRC+. He is in play for me on both sites but his best value easily comes on DraftKings in the mid $4K range where he is the 8th most expensive shortstop. Lock and load in all formats.

The 2019 second overall pick is one of a select few prospects getting to play every day in the big leagues and the Royals have shown some patience with Witt as he develops into the superstar we all expect. The average(.217) is nothing to write home about but it appears he is starting to heat up with hits in three straight and four of his last five games and home runs in back-to-back games, as well. The White Sox have yet to announce a starter but we know it won't be against their top arms so I will be getting exposure to Witt in all formats most likely. Stay tuned for starting lineups.

The Angels' offense has been a beast to start the 2022 season leading the league in runs scored(4.9 per game) and is top 3 in almost every hitting category. The issue here is that getting exposure to them in cash games is nearly impossible with the prices of the Ward, Trout, and Ohtani so instead I will get my exposure through Rendon who is still fairly priced on both sites. Sure, the average(.227) is ugly but he has produced with 18 RBI hitting cleanup, and more good news as he comes in with hits in four straight. All things considered, Rendon is my top PTS/$ play at third tonight.

Moncada started the season on the IL with an oblique strain but made his debut a week ago now and has looked in mid-season form. He not only has hits in all five games so far but has also hit his first two home runs, as well. I mentioned the matchup being average-at-best above but it's hard to ignore these prices which are in serious buy-low territory at the moment. I will be taking a shot with Moncada and stacking him with Tim Anderson as one of my top two-man stacks tonight.

The Yankees' offense has been an absolute beast this season and getting exposure to multiple players almost every day has been a winning formula. I will be going back to that formula tonight and for cash games, I lean heavily to Stanton in the outfield as he provides a pretty sizeable price gap to Judge on both sites. While not as godly of a start as Judge, Stanton has still been amazing hitting .290 with a .375 wOBA, 154 wRC+, and 10 home runs, and is 5th overall with an insane 55% hard contact rate. Stanton and LeMahieau are my top two cash plays for the Yankees and make sure to build around them to full-stack in GPP.

For us to both spend up at pitching and get exposure to the higher-priced teams we are going to need some value and LaMonte Wade provides just that. He got a late start to the season due to injury but has been solid hitting .273 over his first eight games. This one is much more about opportunity as he is not only hitting leadoff for the Giants but they also start a series in Coors and open with a plus matchup against Senzatela. Fire up Wade in all formats if he is back in the leadoff spot tonight.