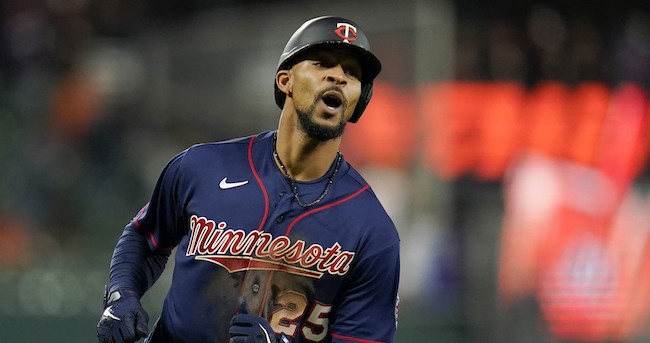 On a day that has a bunch of solid pitching options, Burnes is the best of the bunch and continues to just put up elite numbers across the board. The K rate is down off his career average, but this is still a guy who strikes out batters at a 32% clip and this year is walking fewer guys than at any point in this run. The knock on him here has less to do with him and more to do with the opponent. Even though their team wOBA is in the bottom third, this is still a good offense at the top and Burnes is really at even win odds for the day. That does cut into his projection some.

If looking for some better win odds, Sonny Gray could fit the bill considering he’s coming in as a -217 home favorite against the Tigers on Tuesday. Gray has flashed elite upside K stuff over the last few years with his issue being around the control. He still walks far too many guys (almost four per nine this season) which can cut into his overall innings. But the Tigers rank second-to-last in team wOBA this season, making them one of the better matchups for an opposing pitcher. Gray is a fantastic deal on DraftKings especially.

As I said, there are a number of good arms to pick from today. Kevin Gausman (FD $9400 DK $9500) has had a fantastic move back to the AL East and has struck out 57 batters this season while walking only three.

George Kirby (FD $7000 DK $6000) gets to face off against the league’s worst offense in the A’s and does project to have some major league K stuff. He’s a solid DK SP2 flyer and is close to a cash play considering the price.

The Diamondbacks have one of the better team implied run totals on the day at 5.0 and as a squad are mostly coming cheap across the board. It’s going to help if you want to spend up on some pitching or other big bats. The righty Heasley has struggled in a small major league sample size though doesn’t grade out as much of a prospect. Smith meanwhile should hit second in the lineup and though the OPS is only in the .700 range, the issue is the K’s and that’s not a problem against Heasley. He’s much better against righties for his career with a 107 wRC+ and an OPS that’s .145 points higher in this split.

There are a few teams standing out as stack and cash game options based on their pricing and matchup. The D-Backs are one and the Dodgers are another. Muncy remains too cheap on FanDuel at $3000 though he’s struggled this season for sure. While he’s still walking at a 20% rate, the slugging has fallen off a cliff and is at .276, well below the OBP. His hard contact rate is down though he’s still getting the ball in the air at least. If the Dodgers are still going to hit him around the middle of the order then I’m going to trust it, though I get the concern.

It’s unlikely that Marte ever returns to the 32 home run form from 2019. That guy isn’t walking back in through the door. But he’s hitting third in this Arizona lineup which has a great matchup on Tuesday. Marte is running pretty bad on the Hr/FB rate this season, sitting at only 4.5% which is less than half his career average. I do think there’s some power here and the price is cheap enough on both sites considering the situation.

It’s looking like the 33 home run season from last year is a bit of a blip for Polanco but he has some other numbers that are encouraging. He’s walking at a career-best 14% rate and the hard contact rate is still in line with last season. Brieske is striking out fewer than six batters per nine for his major league career and Polanco has been better against righties with a 116 wRC+ and .343 wOBA in that split. There’s a reason the Twins have one of the highest projected run lines on the day.

Turner is another guy who isn’t putting up the same power numbers from the previous season, having knocked 28 in 2021 while only sporting two so far through 179 plate appearances. It’s a bit of a concern considering what we were expecting out of the guy this season from a fantasy perspective. Josiah Gray has some K stuff, but it hasn’t translated to preventing runs and he has a 4.75 career xFIP. I still like Turner’s price on FanDuel as long as he’s hitting third in the Dodgers’ lineup.

He won’t be the last Twins bat you’ll see here for Tuesday. Considering what Minnesota paid in the offseason, they haven’t seen anything close to the expected returns from Correa so far. The OPS is sitting in the low .700s and he only has two home runs through his first 124 plate appearances. He has a career-high 42% hard contact rate, but the groundball rate is also the highest of his career. I like where we are getting him on FanDuel though I do think that the DraftKings price is a bit steep.

Third base is a weaker position on this slate of games so I don’t mind taking some savings if we can get it. Arraez projects to hit second in the Twins lineup behind Byron Buxton and the former’s elite skill is getting on base. He has a whopping .454 OBP this season thanks to a 15% walk rate that’s more than double the 6% strikeout rate. In the modern-day, you really just never see a difference like this and it more than makes up for Arraez’s lack of power. He’s one of the best in the game at just getting himself to first and for our purposes, that’s a good thing at these prices. It’s worth noting that he’s only 3B eligible on FanDuel.

Rojas is a 3B option on DraftKings and is coming cheap enough to consider seeing as how he’s projected to hit around 5th in the Arizona lineup. Rojas has been solid this season with an .860 OPS through 55 plate appearances. He has three home runs in that stretch and is tough to put down on strikes at only 18%. Plus the 14% walk rate shows some patience and it looks like he’s made some positive gains season-over-season.

Buxton has cooled off a bit after a blistering start to the season, but he’s still one of the elite plays in the game. He’s on pace for the best power numbers of his career and already has 11 home runs on the season. The K’s are still up there at 27% but that’s much less of a concern against Brieske who doesn’t really have that in his bag. With Buxton hitting leadoff for the Twins, the plate appearance expectation is there and I suspect he’s one of the more popular plays on this slate considering the matchup.

Varsho should be hitting leadoff for the Diamondbacks on Tuesday and know that he’s also catcher-eligible on DraftKings which really helps fit a need. He has an OPS pushing towards .800 on the season and has shown a power-speed combo 21 home runs and 12 stolen bases through his first 600 career plate appearances. I love the FanDuel price especially, but because of the position works for DK as well.

I love the DraftKings price on Kepler even though he could be hitting a bit lower in the Twins order. This is a guy putting the ball in play about 75% of the time this season and walks (13%) about as much as he strikes out (14%). He won’t get back to his 2019 power numbers, but there are a lot of players who could make that claim. Stacking Twins could be in order on Tuesday and Kepler won’t break the bank for you.