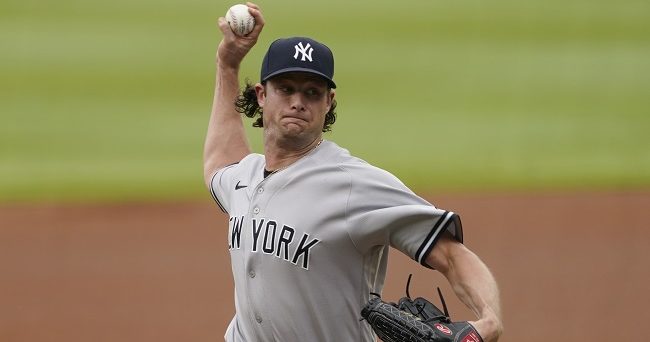 We have a pitcher's duel on Monday night between two of the top favourites for the AL Cy Young but I lean Cole for multiple reasons starting with the #1 offence in baseball to provide him run support. He hasn't even needed against the Rays who he has faced twice over the last three weeks holding them to just one earned run over 12 innings while striking out 17(37%). The other major factor here is the matchup as the Rays are much worse against righties striking out 25% of the time(4th most) in the split and 7% more than against southpaws. All things considered, Cole is our top pitcher in all formats.

Paying up at SP2 on DraftKings might be a popular play with so many good options but I prefer the value route to jam more bats into my lineup. Syndergaard is that value arm and he checks almost every single box starting with the matchup as a big -185 favourite against the Royals and their bottom-five offence. Outside of two meltdown starts, Thor has been terrific this season holding opponents to three or few earned runs in the other eight starts and two or fewer in seven of them. Add to it, he has also reach a season-low price on DraftKings and he is easily our top PTS/$ value pitcher on this slate.

Also Consider: Josh Winckowski(BOS) as another value SP2 who will get a third straight start as a big home favourite(-172) against the Tigers

The first base position is one of the toughest on the slate with all the top guys in below-average to bad matchups while sitting with elite price tags. For me, at least in cash games, I will venture down into the second of pricing and target Luke Voit who has been on a heater as of late. Since the calendar turned to June, he has hit .284 but that is not the real story as he has also added six home runs, 21 RBI, and an eye-popping .399 wOBA and 161 wRC+. I will have exposure in all formats on Monday.

We rarely write up catchers but they are a very important piece when building your lineups on DraftKings. I often look for value at the position whether correlated or not but tonight it all comes together as the Red Sox get one of the best matchups on the board and lead all teams in implied runs. There isn't a ton of upside here(98 wRC+) but he has been consistent coming in with a .271 average and hits in four of his last five games. He is our top catcher on this slate.

If pitching is higher on your priority list tonight, Cronenworth likely isn't on your radar on DraftKings with a price that has reached the $6K level. Don't completely cross him off your list, however, as he has been arguably the hottest bat in baseball recently as he comes in with multi-hit games in six of his last seven games and a .378 average in June. The matchup isn't at the top of my list but Davies has given up 3+ earned runs in five of his last seven starts. While I will reserve him for GPP only on DraftKings, the price is a little easier to live with on FanDuel where his best value lies.

With David Fletcher still out and Anthony Rendon being placed on the IL last week, some opportunities have been created for some other players and it aligns perfectly tonight with some much-needed PTS/$ value. Let's start with Rengifo who isn't the flashy upside play most are looking for in GPP but he comes at near min price, has hits in three straight games, and hits lefties very well(.351 wOBA/132 wRC+). If he is back hitting 5th tonight, he will be one of our top PTS/$ plays on the slate.

When first looking at this smaller eight-game slate, I was a bit shocked to see Bogaerts as the 5th and 7th most expensive option at the shortstop position. I say this as he comes into tonight ranked 8th in WAR among ALL players, sits third with an elite .337 average and combines that with .400 on-base percentage. He has been much better against lefty pitching but is still well above-average against righties with a .377 wOBA and 144 wRC+. All things considered, Xander is the only shortstop on my radar at this time.

Also Consider: Bo Bichette(TOR) on FanDuel where the price is in the low $3K range or Oneil Cruz(PIT) who is expected to make his debut today at shortstop and is projected to leadoff with his combo of power and speed

Devers is on about the same pace as his last two full seasons in terms of the power numbers but what is putting him on the radar for MVP in 2022 is the complete game coming together. It starts with patience at the plate as he has the K rate back down in the 17% range which has given him an elite .383 OBP to go with a .330 batting average. He is also Top 5 in baseball against right-handed pitching with an insane .430 wOBA, 184 wRC+, and .292 ISO. There should be more than enough value on this slate to load up with one top pitcher and 1-2 elite bats, Devers being one of them.

With Rendon down for the season, it is very likely we see a platoon at third base between Tyler Wade and Matt Duffy with the latter getting his hacks tonight against a lefty. It has been a struggle since being moved into an everyday role but he checks a lot of boxes on this slate at near min price on both sites, likely hitting cleanup behind Trout/Ohtani, and is above average against lefties. If paying up for both pitchers on DraftKings tonight, pairing Duffy and Rengifo is an excellent way to start your bats and get exposure to the Angels who are 2nd in implied runs tonight.

While the Angels won their first series in a month over the weekend, the offence is still in a funk with an ugly 48 wRC+ over the last week but I am not worried as they get arguably the best matchup on the board against lefty Kris Bubic. One player I am definitely not worried about is Trout who has been carrying the team on his back in June with hits in nine of his last 11 games including eight home runs and 15 RBI. He is a top play in all formats with his best value on DraftKings with a laughable price tag that is in the mid $5K range.

For Ward, he was one of the surprises this season as he emerged from seemingly nowhere to put up a ridiculous .462 wOBA and 210 wRC+ before injuring his hamstring in early June. It has been a struggle getting back to for with hits in just two of seven games but the good news is that both were three-hit efforts. Better news is that the price is still down while hitting leadoff in front of Tour/Ohtani in one of the best matchups on the board. Lock and load on Angels' outfield tonight.

One more value play to help us get to the elite pitching and bats on this slate and I don't know how much more we could ask for with this one. Not only are the Red Sox tops in implied runs tonight, but they have a leadoff hitter who has killed it at AAA and was called up to hit leadoff in front of Devers, Xander, and J.D. Martinez. He has yet to really take off but the good news is that he does have hits in four of six games since the recall. Provided the price and opportunity, he is one of, if not our top PTS/$ value on this slate.