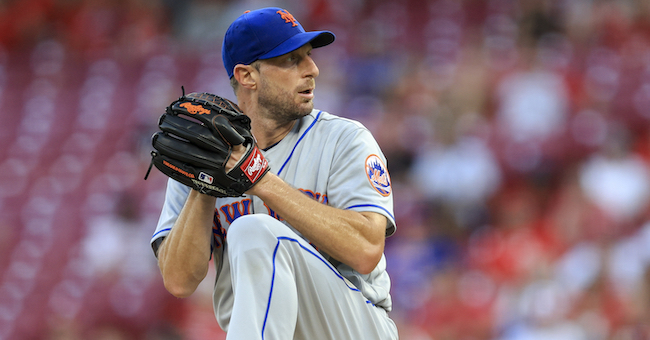 We have just 10 days remaining in the regular season! That means these final two weeks will be chaotic in terms of roster management because these teams do some funky things to close the year. With that said, there are plenty of playoff implications and roster bonuses to be had, so all the studs should be in their respective lineups. With that in mind, let's start with the best pitcher on this slate!

Now's your chance to get DFSR PRO, which will give you access to our MLB, NBA, PGA, NHL, and NFL optimizers and our new player lab! Get started for free by clicking the button below.

Mad Max has been mauling opposing hitters for a decade now, and he looks as good as ever this season. The former Cy Young winner has a 2.15 ERA and 0.88 WHIP on the year. He's also got 162 strikeouts across 134 innings, establishing himself as one of the best strikeout pitchers in the sport. You might be concerned that Scherzer just came off the IL, but six perfect innings in his return to action should alleviate any concerns. The matchup might be the best part of this, though, with Oakland ranked bottom-three in runs scored, OBP, OPS, wOBA, and xwOBA. That has Mad Max and the Mets entering this matchup as a -300 favorite.

The Marlins have some tremendous young pitching, but this guy might be the ace of the future. The 24-year-old has a 2.91 ERA and 1.09 WHIP, allowing one run or fewer in seven of his 12 starts. That upside is no surprise when you look at his minor league averages, amassing a 2.56 ERA, 1.04 WHIP, and 10.8 K.9 rate since 2018. The stuff is there for Roansy to be a stud, and he should add to those absurd averages in this matchup with Washington. The Nats traded Juan Soto and Josh Bell at the trade deadline, sitting bottom-10 in almost every offensive statistic. In their one meeting two months ago, Cabrera allowed just two hits to this lackluster lineup.

It was rough sailing for Big Pete after the All-Star break, but the big man is starting to get hot once again. Alonso has six homers over his last 15 games, generating a .368 OBP, .585 SLG, and .953 OPS across his last 17 games. That's the run we saw to start the year, with Alonso accruing 37 dingers and 121 RBI in total. That always has him batting third in this Top-5 Mets lineup, which is bad news for a lefty like JP Sears. Not only does that give Alonso the platoon advantage from the right side, but Sears has surrendered at least five runs in two of his last three starts.

This pricing seems crazy. The Braves are one of the highest-projected lineups on this slate, and Olson is their best option from the left side. The reason they have such a lofty projection is the matchup with Kyle Gibson, who's got a 9.68 ERA and 2.15 WHIP across his last four starts. That's horrifying in hitter's haven like Citizens Bank Ballpark, mainly since Atlanta is a Top-5 offense. Olson is a significant piece of that, flirting with a .500 SLG and .250 ISO throughout his career. He's also been much better against righties, registering a .348 OBP, .512 SLG, and .860 OPS against them. In addition, Olson has a .478 OBP and 1.526 OPS in 23 at-bats against Gibson.

Gary Sánchez (FD $2200 DK $2700) is a good punt play at catcher after homering and picking up for RBI on Saturday.

Edman has been moving up and down this lineup all season, but he's been glued in the two-hole for a month now. His recent form is the reason for the promotion, providing a .295 AVG, .518 SLG, and .856 OPS across his last 39 games. That doesn't even consider that he's one of the league leaders in runs and steals, totaling 184 runs and 61 steals since the start of last year. All of that makes him intriguing since he faces an inexperienced righty here, with Matt Grove producing a 4.66 ERA and 1.55 WHIP in limited time this season. He's the one weakness in this Dodgers staff, and we believe this St. Louis stack is one of the sneakiest on the slate.

It's strange to see Muncy's average sitting around .200 because this guy has been raking since the All-Star break. Over his last 45 games, Muncy has maintained a .274 AVG, .359 OBP, .560 SLG, and .918 OPS. That's more representative of the guy we've seen throughout his Dodger tenure, with Muncy posting almost identical averages over the last four years. The early-season slump is obviously a thing of the past, and we don't mind that Muncy has better splits against righties. Adam Wainwright is showing some weaknesses right now, too, surrendering a 5.57 ERA and 1.81 WHIP across his last four starts.

It's just a matter of time before Cruz is one of the most expensive players on every slate. This elite prospect is breaking statcast with his elite athleticism, and the numbers are finally starting to represent the player we expect to see. Cruz has collected a .563 SLG and .874 OPS across his last 24 games played. He's also providing elite speed, and the move to the leadoff spot has done wonders for his fantasy value. Almost all of his work has come against right-handers, posting an OPS that's over 200 points higher than it is against lefties. This is a righty he can exploit, too, with Adrian Sampson sporting a 4.91 career xFIP.

It's actually been a bad second half of the season for Ramirez, but a bad stretch for J-Ram is suitable for most players. This guy is still on pace for 30 homers and 20 steals while totaling 86 runs and 117 RBI. Those are some of the best counting statistics in the sport, and it makes Ramirez a Top-5 option in fantasy every year. He's been showing flashes of breaking out of his slump, too, with Ramirez registering a .405 OBP and .844 OPS across his last 16 games. He's also traditionally been better against left-handers, and that's excellent news, with Cole Ragans posting a 5.40 ERA and 1.57 WHIP.

It seems like Bregman and Correa are in here every day, but both of those guys have been producing every day. Bregman has been one of the best players in baseball for two months, maintaining a .307 AVG, 4.07 OBP, .551 SLG, and .959 OPS across his last 52 games. That's a large sample size, and it's strange that these sites haven't raised his price even more. A matchup with Austin Voth is also marvelous, with the Orioles righty accruing a 4.88 ERA and 1.39 WHIP throughout his six-year career. Don't be afraid to set up a full Stros stack with Bregman in the heart of it.

We were recommending Jimenez when he was $500 cheaper just two weeks back, and it's about time these DFS prices raised his prices to where it should be. That means we need to wait for the right opportunity to use him, and that happens to be today. Let's start by talking about Eloy's recent form, establishing a .349 AVG, .714 SLG, and 1.109 OPS over his last 16 games. That's concerning for a crappy lefty like Tyler Alexander, accruing a 4.91 ERA and 1.32 WHIP. Southpaws are always superb matchups for a team like the Sox because so many of these guys bat from the right side! Don't forget about Jose Abreu and Andrew Vaughn as well!

We just discussed that the Stros are one of the best stacks of the day, and the Tucker-Bregman duo is the way to go. Tucker has actually been their most exciting fantasy player this year, picking up 29 homers and 23 steals. He's also over 100 RBI, doing damage in the five-hole of this lineup. His recent form is ridiculous, too, tallying a .311 AVG, .581 SLG, and .927 OPS across his last 45 games. That gives him massive RBI opportunities behind all of these All-Stars, and he should have plenty of chances here with Houston projected for five runs. Not to mention, Tucker has a .897 OPS against righties since his call-up!

The Guardians have been looking for lineup protection for Ramirez for years, and it looks like they might finally have their guy. Gonzalez has some of the most dominant hard-hit rates in baseball, and it's finally equating to results. The 24-year-old has a .322 AVG, .586 SLG, and .955 OPS across his last 21 games. A run like that is impossible to find from a player in this price range, and it's difficult to understand what these DFS sites are thinking. We also don't mind that Gonzalez has the platoon advantage from the right side against one of the worst pitchers on this slate.