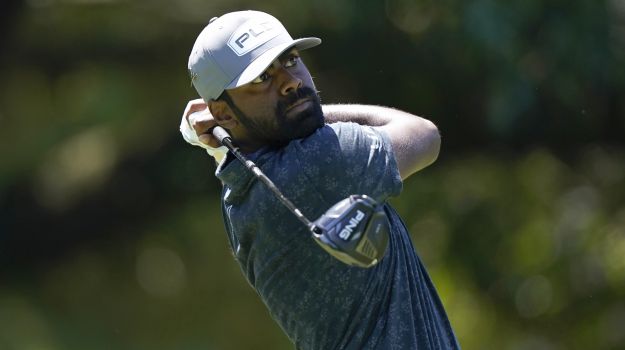 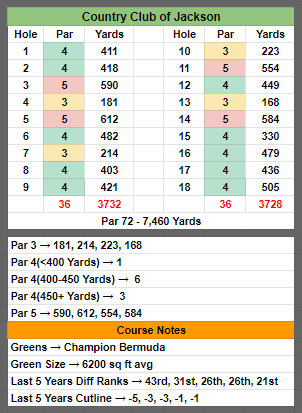 After another USA victory in the President's Cup, the 2022-23 PGA Tour season continues with a trip to the Country Club of Jackson for the Sanderson Farms Championship.

The course is a Par 72 with some length as it is listed at 7,460 yards on the scorecard. Despite that, it has played as one of the easiest courses on tour ranking 45th out of 50 courses during the 2022 season and has not ranked inside the Top 25 in any season. It does have some of the narrowest fairways on tour but the rough is only around 2" tall on average and doesn't present much of a challenge. Right off the bat, this elevates SG: Approach in my model and breaking that down further, I like to look at Good Drive % and Rough Proximity which take into account a low fairways hit % in the 50-55% range. What I find, however, in these early season events is that stats models can be a bit misleading with an influx of Korn Ferry Tour players who have a very small or no sample size on the PGA Tour.  With this, I will be looking at a lot of different data to come up with my player pool and favorite plays which you will see below. Let's get started.

Theegala is coming off a very successful rookie season on Tour where he made 26 of 32 cuts(81%), came close to winning the Travelers Championship(T2), and ended up with five Top 10's and 11 Top 25 finishes. He carried that success over into the start of this season as he picked up a T6 at the Fortinet two weeks ago with an excellent all-around game where he gained 4.1 strokes tee to green and another 4.7 on the greens. He finished T8 here at CC of Jackson last year and will look to build on that this time around. He checks all the boxes and despite being the 2nd highest-priced golfer this week, is a core play for me in all formats and I will also be betting him at 20-1 to win.

Normally, I am not backing a player who rode an extremely hot putter the week before with just an average tee-to-green game but this one feels a bit different. Montgomery had a spectacular start to his PGA Tour career with a T3 at the Fortinet by gaining an amazing 11.2 strokes putting but I don't think that is his entire game at all. Looking at his Korn Ferry stats from a year ago, he bombed the ball off the tee ranking 15th on tour while also ranking 21st in greens in regulation and yes, 3rd in putting. That is an excellent combination to have success on any Tour and I feel he will be the first rookie who will grab a win. While it may not be this week, I think the hot form continues making him a top DFS target once again.

Lower is now in his second season on tour and while he didn't stand out finishing 20th in the rookie rankings a year ago, he did finish strong. He made the cut in five of his last six events with two Top 25 finishes and looking at the stats, ranked 34th in off the tee, 59th on approach, and 18th in putting. That kind of performance makes him an under-the-radar pick for a win this season and he already came close with a T4 at the Fortinet Championship gaining strokes in every SG category. He also comes a lot cheaper than the two players I mentioned above which has him in my player pool in all formats this week.

This feels like a rookie/up-and-coming player preview article but with weaker fields in these fall events that we have seen in the past, I feel this is a way to get an edge on the field early on. Thompson didn't finish his season on the Korn Ferry Tour like others(MC, MC, T15, T46, T56) but did pick up a win last season which led him to this point as a PGA Tour rookie. Statistically, he comes in with a terrific all around game as he ranked 4th in total driving, 14th in ball striking and 19th in the all-around ranking on the Korn Ferry Tour. That showed in his first appearance on the PGA Tour as he picked up a T9 at the Fortinet Championship gaining strokes in every SG category. In a weaker field, with his early success, the price feels like a buy-low on the talent and I will have tons of exposure this week and early in the season.