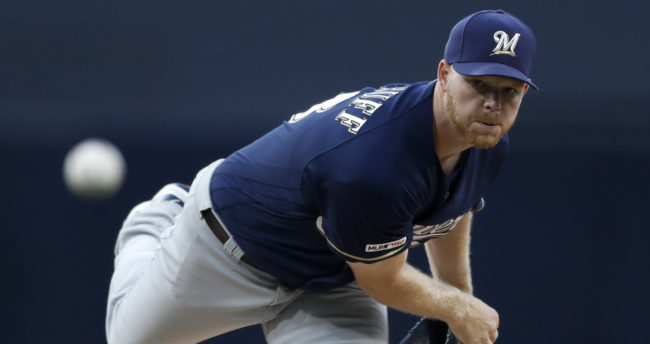 We still have some teams playing for positioning in the season's final days, and no team is feeling the pressure more than the Brewers who trail the final wildcard spot by two games. This makes paying up for Woodruff the optimal play as we know he isn't going to be limited. That and he has been incredible down the stretch holding opponents to just five earned runs over his last five starts(1.36 ERA) and has tallied double-digit strikeouts in four straight. He now faces a D-Backs team that did get to him in their last start but they have struggled since with an 81 wRC+ and 25% K rate so I am not concerned and will be loading up on Woodruff in all formats.

Sandoval let us down a bit as a value SP2 in his last start but I am going back to the well as he has shown tremendous consistency in the second half. He has held opponents to two or fewer earned runs in nine of 10 starts for an impressive 2.15 ERA and while the upside isn't always there, he has struck out seven or more three times. It will get another crack at the A's on Monday and they have been a bottom three offense all season and have struck out 27% of the time over the last month. At these prices, I am on board with Sandoval as a top SP2 option in all formats.

Also Consider: George Kirby(SEA) as a -250 favorite in a game with a low total(7) going up against a below-average Tigers offense

If we are going to be targeting top pitching on the mound, a balanced approach with our bats is the way to go. Enter Ty France who comes with a mid-tier price on both sites and has been red-hot coming in with hits in seven straight including four multi-hit efforts and has posted a .308 average with 148 wRC+ over his last 17 games. In a plus matchup against Bryan Garcia and the Tigers, France is my top play at first base today.

If you happen to take the value route at starting pitcher, there are multiple top-priced plays at first base that make a lot of sense. I will side with Alonso as the Mets are trying to clinch the NL East and the Polar Bear has been solid down the stretch with a .294/.378/.624 slash line with eight long balls going back to the seventh of September. He also gets a plus matchup against Cory Abbott who has given up eight earned runs and three home runs in his last two starts and Alsono has actually been better against righties(.367 wOBA/144 wRC+) this season. He is in play in all formats.

Speaking of Mets hitters that have been hot down the stretch, we have Jeff McNeil who has been the hottest of them all with hits in seven straight with multiple hits in six of those. It goes back even further as he is hitting over .360 in the month of September and getting on base at over a 43% clip. Making this play stand out, even more, is not just the mid-tier price but the matchup as Cory Abbot has really struggled against lefties giving up a .387 wOBA and .536 SLG. Combine all that with a move up towards the top of the lineup and McNeil is a top PTS/$ play in all formats on Monday.

To the other New York team for a player I can't get enough exposure to down the stretch. What I like most is he gives us direct exposure to the Aaron Judge show without paying the enormous price for a projected three walks a game(lol). For Torres, he has been the one sort of carrying the team during the final stretch of the season with hits in 15 of his last 18 games and with nine multi-hit efforts, has tallied a .378 average with .458 wOBA and 207 wRC+. He has been incredibly productive for fantasy yet his price remains in the mid-tier on both sites. Lock and load in all formats.

Correa is already the highest-paid player at the position but will be seeking more in the offseason as he recently told the Twins if they want him they will have to come and get him. I don't see him returning as the team missed the playoffs and while that doesn't completely fall on his shoulders, paying him more isn't going to help add pieces around him. If anything, he has been putting on quite a show previewing himself for the money he is asking for as he is finishing strong with a .363/.415/.619 slash line over the last month. Add in a price on both sites that is very fair and you have yourself a top play at the position on Monday.

Obviously, if you are going the elite pitcher route on Monday, Correa may not be in the cards so let's also look at a value option to help us get there. Normally Crawford is not a player on our radar as he hits down in the lineup but he has been hitting leadoff now for the better part of the last two weeks and is projected there again on Monday. He has not been the most consistent or and doesn't provide a ton of upside but this is more about the opportunity and price point in cash games to help us lock in a solid floor with the expensive pitchers. Cash game only for me tonight.

Also Consider: Willy Adames(MIL) who has struggled a bit recently but hits at the top of the Brewers lineup and they are top 3 in implied runs in a terrific matchup

There is no shortage of top plays at this position but they either have tough matchups or their teams are locked into the playoffs with muddied motivations over the final series. For this reason, I will turn to more value and we don't have to worry about the Twins resting players for the playoffs(sorry Twins fans). Urshela makes a lot of sense here for multiple reasons starting with the price but he also hits in the middle of the order and correlates with Correa who we also like. To top it off, he has been very productive overall(117 wRC+) and especially recently with hits in seven of his last eight games including six multi-hit efforts. At these prices, I will have exposure in all formats.

I am not a fan of the cooler temps and wind blowing in for this matchup but it's hard to ignore what Diaz has been doing for a Rays team headed to the playoffs. First of all, he hits leadoff which is great for his PTS/$ opportunity at a mid-tier price and boosting that up even is the fact he has been terrific all season and especially during the dog days of summer with a .375 average, .433 wOBA, and 194 wRC+ going back to August 18. He is an elite pTS/$ play for me in all formats.

Also Consider: Manny Machado(SDP) if you have the salary as he leads all players at the position in our projections

The Brewers are one of the few teams that still have playoff motivations in the final days of the season and combine that with one of the best matchups on the board and you have yourself a top team to target tonight. Let's start with the matchup as they face Tommy Henry who is struggling mightily and has given up five or more earned runs in three straight starts including six home runs. That has me all over Hunter Renfroe who has 28 home runs on the season and hits in eight of his last nine games. He also has a very affordable price on both sites and is in my player pool in all formats.

The Angels are another team I will be targeting tonight and while we likely can't fit Trout or Ohtani in cash, we can get direct exposure through their teammates. Taylor Ward is one those as he hits cleanup behind the two sluggers and comes in hot with hits in 15 of his last 17 games and multi-hit efforts in five of his last six. The price on FanDuel makes it a little tougher to fit but on DraftKings, he is still in the mid $4K range making him a terrific PTS/$ play in all formats.