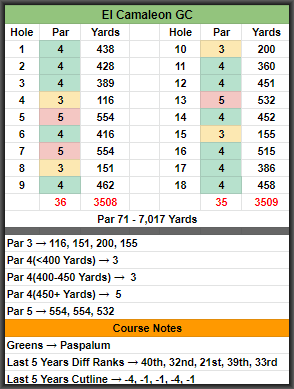 The field this week is a huge upgrade from last week and it starts at the top with four players ranked inside the Top 15 in the world rankings. I am not going out on a limb starting with Hovland who has won this event in back-to-back years but I just can't trust the putting with Morikawa and Scheffler right now. This will be his fifth start worldwide this season and has made the cut in all four with a T5 at the Zozo Championship and T5 at the BMW PGA Championship on the DP World Tour. With a putter that has been above-average and that kind of course history, Hovland is my favorite play in stars and scrubs builds this week.

If looking to go a little more balanced this week I love starting with Tom Hoge who has one of the hottest players on the planet to start the season with four straight Top 15 finishes including two Top 10's. That success has been driven by an elite iron game as he has gained four or more strokes on approach in three of those events and while the Zozo didn't track strokes gained, he finished 6th in GIR. His success here at El Camaleon has been forgettable for the most part but he comes in playing the best golf of his career so I am not at all worried about course history. I will have exposure in all formats.

I don't want to say distance doesn't matter here as Hovland is a beast off the tee but before his back-to-back wins we had Todd, Kuchar, Kizzire, Perez, and McDowell winning this event. Kuchar not only comes back with some top course history with a win(2019) and Top 25 finishes in all three trips, but he also comes in with some form, as well. He finished T12 at the Fortinet to open the season and the T29 at the CJ Cup which could have been better as he gained 4.6 strokes on approach but surprisingly lost 2.7 strokes putting. Either way his game is in form and he returns to a place he has had success. At these prices, especially on FanDuel, I will have exposure in all formats.

I had an outright on Shelton last week and it was looking good going into the weekend and while he didn't get the win he did pick up his third Top 25 finish in four PGA Tour starts. I am jumping back on the train again this week, at least from a fantasy perspective as the DraftKings price remains in the mid $7K range while he ranks, in this field, 29th in SG: Approach, 14th in Proximity(23rd from 200+ yards), 21st in Opportunities gained, and 14th in Birdie or Better. Sign me up in all formats.

For even more value I am turning to another rookie in Ben Griffin who has really found his game after a terrible finish to his Korn Ferry Tour career. He did miss the cut at the season-opening Fortinet Championship but has been trending in the right direction since with a T24 at the Sanderson Farms, T60 at the Shriners(meh), and a career-high T3 last week at the Bermuda Championship. The biggest reason for that success has been the iron game as he ranks 2nd in this field in SG: Approach over the last 12 rounds while also ranking #1 in Par 4 scoring and opportunities gained. This is his first trip to the Mayakoba but success is often driven but those factors so I am on board in all formats.