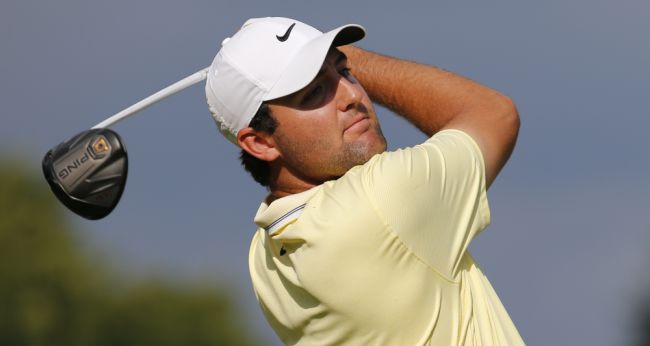 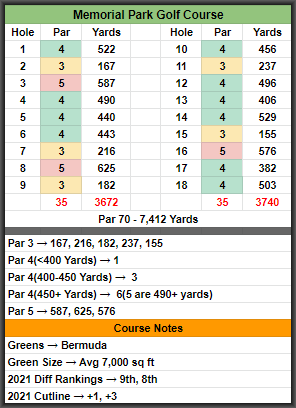 This week the PGA Tour heads to Houston and Memorial Park Golf Course for the Cadence Bank Houston Open. The event dates back to the early 70's but this marks the third year that Memorial Park will play host and it has played as a Top 10 hardest course on tour in each of those previous seasons including the majors.

The course is the longest Par 70 on tour listed at over 7,400 on the scorecard. Two of the five Par 3's exceed 200 yards(216, 237) and five of the 10 Par 4's are 490 yards or longer. This brings a few key factors into my stats model this week and its Driving Distance, Strokes Gained: Approach, Proximity from 200+ yards, and Par 4 scoring. Combine that with a touch of course history and some current form and we can start narrowing down the field and looking at some core plays. Let's dig in!

There is a sizeable gap at the top of the salary this week as Scottie Scheffler looks back in form and ready to take back the #1 player in the world. After a disappointing T45 at the CJ Cup to open his PGA Tour season, Scottie bounced back last week with a T3 at the Mayakoba where he finished 4th in greens in regulation and also appears to have found the putter ranking 12th in putts per GIR in the field. He now returns to Memorial Park where he finished T2 last year and ended up rankings second in Strokes Gained: Tee to Green. If he can continue to putt well this week, another win is on the horizon.

Wise is a player who checks all the boxes this week starting with his form that is trending in the right direction. After a disappointing outing at the Shriners(T64), he bounced back with a T6 at the CJ Cup and a T15 last week in Mayakoba and now has a T15 or better in five of his last seven PGA Tour events. He has also looked good in two events here at Memorial park GC with a T26 and T11 and ranks 6th in SG: Total, 5th in SG: Ball Striking, and 12th in DK points in that time. I might try and pair him with Scheffler in a few but, for the most part, Wise is my core play in the lineups where I am looking to go a little more balanced.

Here we have the classic debate between form and course history and it will be interesting to see what the field ends up doing with NeSmith who missed the cut here in his first trip and finished T46 last year. What he lacks in success here at Memorial Park he more than makes up for with his form coming in as he has now tallied three straight Top 10 finishes after a missed cut at the season-opening Fortinet Championship. The transformation can be almost fully attributed to his iron game as he lost four strokes in that MC at the Fortinet then turned around and gained 6+ in each of the next two events and led the field hitting 80% of his greens at the Zozo. Long irons are going to be key here this week and looking at the sheet, NeSmith is the only player in the field to rank Top 20 in both Proximity from 175-200 and 200+ yards. The price is peaking but I will still have exposure in all formats and love pairing him with Wise in a balanced build this week.

After seeing his price peak up close to $10K at the Bermuda, it is back down in the comfort of the $7K range which likely draws some ownership for a player who has been very consistent lately. After a missed cut at the Fortinet and T54 at the Sanderson Farms Championship, he has put together four straight finishes inside the Top 30. His game is driven by his driver as he is Top 25 in SG: Off the Tee in this field and that is led by distance which should play to his advantage this week. I look for the form to continue here and at these prices, I will have exposure in all formats.

The $7K range on DraftKings is my favorite spot this week and Hughes is another one at the top of my list. He actually checks more boxes than Rodgers as he comes in with better form with three straight Top 25's including a win at the Sanderson Farms and also comes back to Memorial Park with terrific history finishing T29 and T7 in his two trips. He and Rodgers attack a course a little differently as Hughes is just average off the tee in terms of distance but makes up for it with irons that can get red-hot at times and an elite around the green and putting game that always seem to have him in play. Lock and load in all formats.

After a pretty sub-standard finish to his KFT career(T56, T46, MC, T42, MC), Davis Thompson is off to a hot start on the PGA Tour. He has made the cut in all three events highlighted by a T9 at the Fortinet Championship and T15 at the Shriners. The success is centred around ball striking as he has gained strokes both off the tee and on approach together in all three events(+13.7 strokes ball striking total). He has length off the tee, a red-hot iron game, and is Top 20 in both par 4(17th) and par 5(4th) scoring. He is likely the chalk in this range but I will still have exposure in all formats.