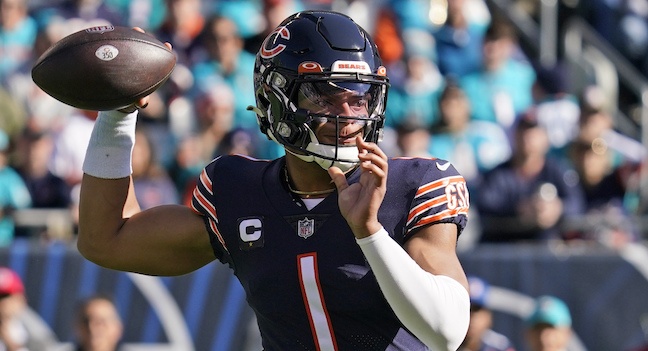 Fields has just been ridiculous over the last couple of weeks with a combined 325 rushing yards which would be great for a RB1 and is basically unheard of for a quarterback. Fields is now sixth in the NFL in rushing yards and has also gotten into the end zone six times with his legs which is tied for seventh. In Week 11 he’ll get the Falcons who rank 30th in DVOA defense and 25th against the run. It’s another smash spot for Fields who has been as good as really any QB ever in terms of fantasy over the last couple. On DraftKings, he’s still coming a bit too cheap considering the safety you get with the running attempts.

Lamar Jackson is actually coming a bit cheaper than Fields on FanDuel and that is where we are likely going to play the Ravens’ quarterback. He’s coming off the bye fully rested and now gets to face off against a Carolina team ranked 22nd against the run and 27th against the pass. Plus, the Panthers are tied for most opponent plays from scrimmage this season meaning it’s a pace-up matchup for Lamar. The Ravens did lean a lot on Kenyan Drake in Week 9 and will get Gus Edwards back, so they could just grind this game away, but it’s tough to fade Lamar Jackson as one of the highest fantasy floor quarterbacks out there.

I do think there’s a case to play Danny Dimes on DraftKings where he’s only $5700. The Lions are the 26th-ranked defense and equally bad against the pass and the run. Jones has been able to get it done with his legs and as you’ll see in a second, Saquon Barkley is in a smash spot. Pairing them together in a great matchup is a high-floor approach in cash games. 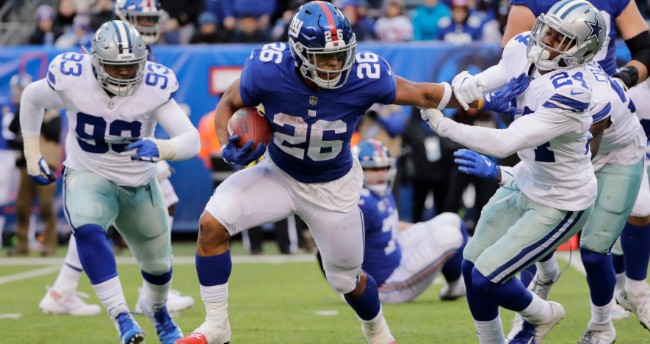 Saquon Barkley carried the ball a ridiculous 35 times in Week 10 against the Houston Texans and there was a reason we wrote him up as one of the best plays on the whole slate for cash games. The same is the case here again against Detroit in Week 11. The Lions rank 27th against the run and we know the Giants want to have Barkley on the field as much as possible. That he’s featured in the passing game as well makes him game-script independent which can’t be said for most running backs. His 234 rushing attempts + receiving targets rank first in the league and that type of insane usage isn’t likely to change anytime soon.

Khalil Herbert is now out for the Bears and we could be once again heading to every down status for David Montgomery in this offense. Back in Weeks 1 and 2, he played 66% and 80% of the snaps before getting injured and having Herbert enter the mix. We could be going back to those numbers which would put him in line for 20+ touches a game. As mentioned with Fields, the Falcons are a very bad defensive team and though the Bears are dogs in this one, I think Montgomery is on the field plenty. As with Jones and Saquon, pairing Fields and Montgomery in cash could have a very high floor.

Singletary was a popular play in cash on FanDuel in Week 10 stemming mostly from there being very little in the way of running back value on the slate. He ended up getting there on the back of two rushing touchdowns which he’s unlikely to repeat. But he also played 72% of the snaps and got 13 carries and two targets. Now, he’ll go up against the Browns who have the league’s worst rushing defense. That lines up well if he is the clear RB1 in this offense.

If Damien Harris were to be limited again then Rhamondre Stevenson would be a great play.

Lamb has seen double-digit targets in two of the last four games and is coming off an absurd 15 targets and 11/150/2 line in Week 10 against the Packers. He has a 29% target share over the last four weeks and is clearly a WR1 in this offense with Dad Prescott under center. He’s priced way too low on DraftKings especially and makes for a higher floor play in this game against the Vikings which has the second-highest implied total of the main slate.

Cooper Kupp is going to miss extended time and though the Rams’ offense is a bit of a mess right now, it should still open up plenty of receiving targets along the way. Robinson isn’t having the fantasy impact many thought he would since coming over as a free agent in the offseason, but he’s averaged six targets a game over the last four. That could tick up to 8+ now and the price hasn’t moved enough to reflect that kind of change.

Meanwhile, Ben Skowronek played 98% of the snaps in Week 10 and saw seven targets in the passing game with John Wolford under center. It should be Matthew Stafford back from the concussion here this week and if Skowronek is taking over the Kupp slot role then double-digit targets are on the high side of his range of outcomes.

If Jerry Jeudy were to sit then Cortland Sutton could be in play.

As with Allen Robinson and Ben Skowronek, there are some targets to go around with the Rams' offense without Cooper Kupp. Though it was with the backup quarterback in Week 10, Higbee still saw 8 targets and that could be a repeatable number in this game against the Saints. The Rams' offense has issues, but he should see enough volume to justify these prices, especially the $4K number on DraftKings.

Juwan Johnson is coming very cheap on both sites, and especially DraftKings. He played 72% of the Saints' snaps in Week 10. That led to seven targets and a final 5/44/1 line when it was all said and done. Now he’ll get the Rams who are 21st in the league against the pass.

He had a bad game, but Greg Dulcich played just about every snap in Week 10 and the Broncos could be without Jerry Jeudy.