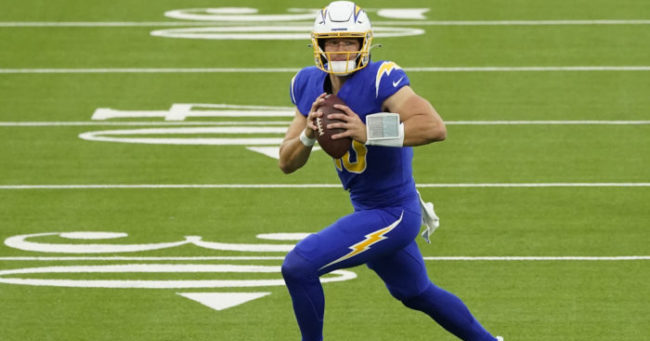 There are going to be a couple of games on the main slate that we’ll be almost exclusively targeting and this is one of them. Chargers and Raiders has a 50.5 over/under, the third highest of the slate and Justin Herbert is gifted the opportunity to face the worst pass defense in the league. Las Vegas hasn’t been able to stop anyone in this department all season and are almost definitely going to have their hands full against a Chargers team that throws the ball the second-most in the NFL. Herbert has such a high floor in this game especially if it turns into an up-and-down affair. He’s in play on both sites, but especially FanDuel.

Trevor Lawrence is coming cheaper on DraftKings, a spot we might end up using him for cash this week. He’s got a great matchup against the Lions who rank 24th in DVOA defense and allow the third-most opponents’ plays per game on the season. That’s a great meeting point when trying to get a high floor play at a lower cost. Lawrence has had to throw a bit more over the last couple of weeks in games against the Ravens and Chiefs, and that could be the case again if this turns into a shootout with Detroit. The 51.5 over/under is the second-highest of the main slate and we could see plenty of exposure to this game. Lawrence runs just enough (3.5 times a game) to keep the floor higher in that respect.

Of course, strongly consider Patrick Mahomes whose Chiefs have the highest implied total of the slate.

Jared Goff makes for a DraftKings consideration at just $5100.

Jacobs is an interesting case this week for cash. On the one hand, with his usage he’s nearly a lock at these prices, even on FanDuel where he’s getting close to $10K. But there’s also the fact that he’s dealing with some injuries and isn’t going to practice at all before Sunday. That could leave us in a bit of a pickle with whether to play him seeing as how this game isn’t happening until after 4PM EST. Jacobs ranks third in the NFL in running back usage (carries + targets) behind only Derrick Henry and Saquon Barkley. And he’s coming off an unreal 40 (40!) touches in Week 12. This simply doesn’t happen in the current NFL but yet here we are. We need to keep abreast of this situation and if he were to sit then Zamir White would almost certainly vault to the top of the cash game board.

Travis Etienne left last game early with an injury, but it appears holding him out was only precautionary and he’ll be back at it 100% this time around. The Jaguars have had an interesting season in that they are 4-7 but have a +12 point differential. They aren’t officially out of the playoffs and there’s a good chance Etienne sees full usage in this game against the Lions. Detroit is ranked 26th against the run and Etienne is featured enough in the passing game that he’s almost script-independent. In his last full tilt, he played 78% of the snaps and got 14 looks. That’s way on the low end of expectation and it’s helped to keep his DraftKings price in check. Note: Like Jacobs, Etienne does have some injury risk. If he were to sit then Jamychal Hasty would be a cash game play.

Though AJ Dillon scored the Packers rushing touchdown in Week 12, Aaron Jones still played 71% of the snaps and saw 16 touches along with a touchdown through the air. Now, the Packers will play the Bears who rank 31st in DVOA defense and 28th against the run. This is a smash spot for the Green Bay running attack especially seeing as how Aaron Rodgers is banged up. I love the FanDuel price on Jones sitting in the mid-$7K range.

Amon-Ra St. Brown has seen eight or more targets in each of the last five games, and in non-injury games this season he is averaging 10.1 targets. Basically, he’s an elite usage WR1 who isn’t priced that way on DraftKings. It makes for a great cash game spot against the Jaguars in a game with a high total. The Lions continue to pass the ball at a high level and ARSB offers a chance at great targets share below the group of stud wide receivers in the upper salary tier.

The 49ers are dealing with a few different injuries right now which could have down chain effects on how opportunity is distributed over the next couple of weeks. Elijah Mitchell is out and Christian McCaffrey is having issues as well which could mean he sees limited touches. Deebo Samuel went into Week 12 with an injury tag, but still played 79% of the snaps and touched the ball nine times. The output was subpar, but I think the opportunity could tick up here against Miami. There’s a chance they lean on him a bit more with the ground game and he’s coming way too cheap on FanDuel.

Zay Jones has had elite target share over the last couple of weeks, totaling 24 targets (14,10) in that span and piling up 213 total yards on 19 catches. He’ll have a chance to add to it this time around against the Lions. Jones hasn’t had anything close to a price correction on DraftKings where he’s still coming at sub-$5K. I suspect he sees solid ownership on both sites considering the recent bump in productivity.

With tight end, as always, we are looking to get out of the position as cheap as possibly unless paying up for Travis Kelce. That’s likely to be the case again this time around and it could take wading through a pile of *meh* options. The good news for Kmet is that he still saw target share in Week 12 despite Justin Fields being sidelined. The latter should be able to return this week and has looked Kmet’s way over the short term. Plus, the team is now without Darnell Mooney.

Freiermuth saw his targets tail off to just four in Week 12 but before that he had topped seven in each of the previous three weeks. I still like going back to him here on both sites, but especially DraftKings where the price hasn’t come up all that much. Averaging over seven targets per game on the season is more than almost anyone else at the position can claim and that alone almost makes him a cash game consideration.