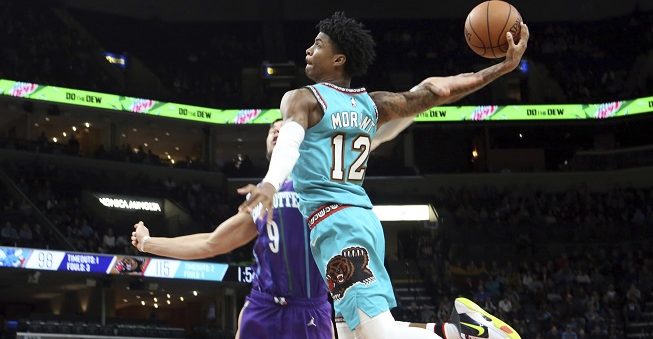 The injuries have been awful this season, but we're starting to turn things around. We've had a multitude of All-Stars return this week, and more are right around the corner. That can cause some chaos from a DFS perspective, but it's imperative to capitalize on these moves and adjust your process as quickly as possible. We feel like we've done that here, so let's start with one of the most exciting players in the NBA.

First time with NBA or NFL? Read our free NBA and NFL Ebooks on building lineups, general strategy, and more. We've got you completely covered.

Morant is the most exciting player in the NBA. He's become even better with Desmond Bane (toe) sidelined, posting a 37 percent usage rate with Bane off the floor this year. That's led to Ja scoring at least 41 DraftKings points in 13 of his last 14 games, totaling a 47-point average in that span. He's also flashed a 73-point upside this year, scoring at least 57 fantasy points on six occasions. We believe one of those ceiling games is in play against this disastrous Detroit defense, with the Pistons ranked 29th in both defensive efficiency and points allowed. The minutes, usage, and shot attempts are all up with Bane out, making Ja one of the safest plays on the slate.

Payne has been phenomenal when filling in for Chris Paul over the last two years. In 12 starts for CP3 last season, Payne provided a 34-point average across 30 minutes a night. He's made precisely 12 starts for Paul again this year, averaging 33 DK points per game across 32 minutes a night. It's obviously a trend at this point, and it's hard to understand why he's still below $7,000 on both sites. He's also coming off a season-high 49 DraftKings points in his most recent outing and has the best matchup in fantasy here. San Antonio sits dead last in points allowed and defensive efficiency.

Tyrese Haliburton (FD $9400 DK $9100) is leading the NBA in assists and should go nuts against a defensively inept Portland backcourt.

We just talked about how Payne is starting at point guard in the absence of CP3, but it's made Booker an MVP candidate. The sharpshooter is flirting with a 40 percent usage rate with Paul off the floor this season, averaging over 48 fantasy points per game. It's far from surprising when you consider his role, averaging 21.4 shots and 36.4 minutes a night. Book is also amid the best stretch of his career right now, scoring at least 52 DraftKings points in four straight games. He's also averaging over 60 DK points per game in that span and should keep that great form against the worst defense in the NBA.

Simons is proving to be a stud in the absence of Damian Lillard (calf). There's some talk that Dame will be ready to return here, but we anticipate Portland running their offense through Simons no matter what. The sharpshooter has scored at least 28 DraftKings points in 15 straight games, posting a 39-point average in that span. He also had a career-high 45 raw points in Saturday's win, scoring at least 53 fantasy points in three of his last five games. Indiana is an incredible matchup, too, surrendering the sixth-most fantasy points to opposing shooting guards this season.

We had some high-priced guys in the guard section, so let's find a couple of cheap small forwards. Murphy is one of the best per-dollar plays on the board, earning the starting SF role in the absence of Brandon Ingram. That's led to Murph scoring at least 29 DraftKings points in four straight games, playing nearly 35 minutes a night in that span. He's played over 20 minutes 14 times this season, generating a 31-point average in those outings. That's really all you can ask for from a sub-$6K player, and Denver is far from a devastating matchup. The Nuggets rank 25th in defensive efficiency this year.

Winslow is not a great bet to score 20 raw points, but he stuffs the stat sheet with the best of them. The versatile wing actually had just two points on Saturday but collected seven rebounds, five assists, and three steals across 39 minutes. That's what makes him so valuable, scoring at least 26 DK points in all six games since his insertion into the starting lineup. That should continue here with Josh Hart out, playing nearly 40 minutes a night in this newfound role. Indiana is a team he can continue to stuff the stat sheet against, sitting 21st in defensive efficiency, 25th in points allowed, and fifth in pace.

Mobley is a star in the making. This kid is a stud on both ends of the floor, scratching the surface of what he could become. The youngster is averaging 35 DK points per game this season and keeps improving by the day. The most impactful variable is the fact that he's starting at center in the absence of Jarrett Allen. That's bumped his shot attempts, minutes, and rebounds, averaging 41 fantasy points per game in the last five games Allen has missed. Facing the Knicks is awesome, too, with NY ranked sixth in pace and 23rd in points allowed. In their two matchups last season, Mobley averaged 43 DK points per game.

Jackson is one of the most talented players in the NBA. This guy is an elite rim protector on the defensive end but a sharpshooter on the offensive end. That's exactly what we want from a fantasy player, averaging 41 fantasy points per game since his debut. He's posting that absurd average despite playing just 26 minutes a night, and that number will inevitably get closer to 30 minutes a game. We already talked about how Ja benefits from facing the second-worst defense in the NBA, and it's enormous for JJJ as well. The Pistons are allowing the fifth-most fantasy points to opposing PFs, and Jackson gets all the same benefits of Bane sitting out as well.

Anthony Davis (FD $11600 DK $10700) is the leading fantasy producer over the last two weeks and is a good play on every slate right now.

Nurkic is one of the most underrated big men in the NBA. This guy has scored at least 28 DraftKings points in eight of his last nine games, posting a 35-point average in that span. He's been even better as of late, scoring at least 35 fantasy points in six of his last seven games. The boost in production correlates with an increase in playing time, and that should continue with the big man getting healthier by the day. A matchup with Indiana might be the best part, with the Pacers allowing the second-most fantasy points to opposing centers. We saw Ivica Zubac collect 31 points,\ and 29 rebounds against this team, and Nurk has a very similar profile.

This DraftKings price is laughable. Robinson has been held back by injuries all season, but he's a $7K player on both sites when he's getting a full allotment of minutes. That's what we've seen the last three games, with Mitch-Rob averaging 38 DraftKings points per game across 30 minutes a night. This guy has always been among the best per-minute producers in the league, and he's an elite fantasy option in a 30-minute role. Facing Cleveland is a challenging matchup, but it will force Robinson into some big minutes to oppose one of the largest frontcourts in the NBA.