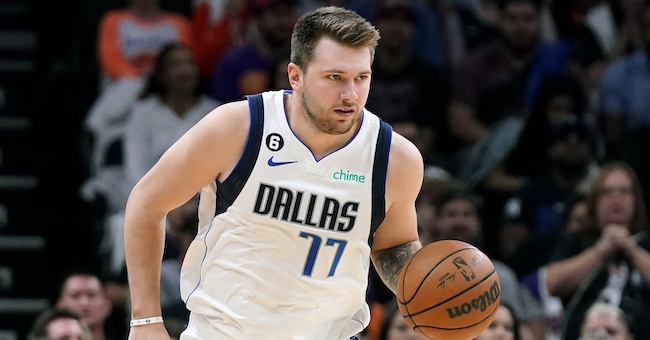 Luka Doncic is on the second half of a back-to-back but was done a favor yesterday with the Mavericks blowing out the Suns. That meant Luka and company played significantly reduced minutes and there isn’t an overwhelming threat of anyone being rested here. There are some excellent pay-up options on this short slate but there might not be enough ways to save in order to play more than one of them. Luka makes for about as safe an option as there is averaging 33.5 points, 8.5 rebounds, and 8.5 assists on the season.

We are much more inclined to play Donovan Mitchell when Darius Garland is out, there’s still a case to do it here against the Lakers, especially when you consider just how much he’s been running of late. He’s played 37 and 40 minutes over the last two games respectively, putting up 21 and 22 shots in those games. This Lakers team has been above average in defensive efficiency but still runs one of the fastest paces in the league this season. Cleveland has the highest implied total of the slate (not by much, but they do) and are favorites here at home. With Mitchell coming under $9K on both sites, I think the floor is high enough especially considering the Lakers don’t have enough in the way of point of attack defenders to really limit him and Garland.

The Heat are getting healthier here with the full starting lineup back in action, making Lowry a little less productive from a fantasy perspective. That’s what happens when things get a little more crowded all around. The Heat are coming on the back-to-back after a loss to the Grizzlies on Monday, so there’s some chance we see rest among the core group. At these prices, Lowry’s ability to contribute across the stat line makes him a cash game play on a shorter slate of games.

Tyler Herro has had an up and down season mostly because the injuries have caught up with him in recent weeks. But when he’s been on the court, Herro has been one of the better fantasy options out there, highlighted by his game against the Grizzlies on Monday in which he put up 23 points and 14 rebounds in 40 minutes. On a per minute basis, the rebounding is where he’s seen the biggest gains this season, averaging close to seven boards a game, up nearly two from the season before. The Heat draw a great matchup against a Pistons team ranked second-to-last in defensive efficiency this season.

With Michael Porter Jr. still out, Bruce Brown sticks around as a viable cash game option even on a talented Nuggets team. That’s because the Swiss Army knife combo guard has shown the ability to contribute statistically even when the rest of the team is crowded with high-quality options. He’s scored in the double digits in 10 of his last 12 games, averaging 1.5 steals in that stretch and putting up rebounds and assists in the aggregate even if the numbers fluctuate on a game-to-game basis. It all makes for a higher floor cash option on a shorter slate of games.

Tim Hardaway Jr. (FD 5700 DK 4400) is still coming way too cheap on DraftKings and could be a popular play over there.

If Jarrett Allen is out again then I think we can keep running Mobley at these price points. He will draw Anthony Davis which isn’t a great matchup considering how that dude is rolling right now, but Mobley is playing monster minutes and has been averaging 15 points and 12 rebounds over the last couple. The minutes floor is about as high as anyone in the league with this current construction of the Cavaliers’ roster and the Lakers, by and large, have been a good matchup on the season.

Quick note: Anthony Davis is on the heater of all heaters over the last couple of games for sure. But his price is through the roof and I don’t think there’s quite enough of a track record over the course of this season to make a case for playing him over say Luka, or even Jokic.

As long as Aaron Gordon can keep his minutes up and over 30 then he is a play at these prices against the Mavericks. That’s been the case for the Denver forward over the last three games in which he’s averaged 18 points and six rebounds. On FanDuel, where power forward is traditionally tough to fill, Gordon could be a popular play here in the middle tier of pricing. That’s the kind of slate we are looking at as of this writing.

I think you can consider Bam Adebayo (FD 8900 DK 8000) on DraftKings, but I’m a bit worried about the rebounding especially when the Heat are at full strength.