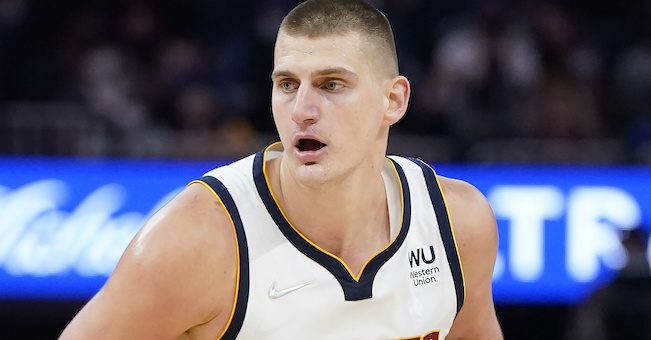 This feels crazy to say, but we crossed the halfway point earlier in the week. The season always feels like it starts off with a crawl, but then it's randomly over before you know it. The All-Star break is less than a month away as well, and it'll be fun to see what these teams do prior to that trade deadline.

A few teams need to make some desperate moves, and others need to rebuild for the future. We still have some time to get to that point, but it's something worth monitoring over the coming weeks!

Irving has always looked like one of the best players in the NBA, and he's showing that with Kevin Durant sidelined. With the former MVP off the floor this season, Kyrie has compiled a 33 percent usage rate while averaging 1.5 DK points per minute. That's on full display when you see that Irving has scored 84 and 62 DraftKings points in his last two outings.

He's been remarkably consistent over the last two months, too, scoring at least 33 DK points in 20 straight games, while generating a 46-point average in that span. Those totals should be easy to reach against Golden State, who rank 26th in points allowed while surrendering the fifth-most fantasy points to opposing PGs.

As someone who had ACL surgery within weeks of Murray, it's been fun watching him recapture his form. This guy was one of the best players in the bubble back in 2020, and we're seeing flashes of that stud recently. Murray has at least 41 DraftKings points in four of his last five games, tallying a 38-point average across his last 14 outings.

That's really all you can ask for from a $7K player, and we've seen this guy get to a $9K price tag in the past. A matchup with Oklahoma City is a good way to keep that ticker pointing up, with the Thunder ranked 20th in points allowed. In addition, Murray has maintained a 37-point average against them in their last four meetings!

Saben Lee (FD $4500 DK $3800) has played 28 or more minutes in three straight outings and is way too cheap with so many Phoenix players sidelined.

We just talked about how shorthanded this Suns team is, so let's start there. Chris Paul, Devin Booker, Cameron Johnson, Cameron Payne, Deandre Ayton, and Landry Shamet are all on the injury report right now, and it's possible all six of those guys sit here. That's forced Lee into the most expansive role of his career, playing at least 26 minutes in seven straight games.

Lee is also averaging 27 DK points per game across 30 minutes a night over his last six games, and those are terrific totals from a $5,000 player. Phoenix can't take this guy off the floor with so many players sidelined, and they've even been giving him some ball-handling duties as well. Facing Memphis can be concerning, but they own a 27th OPRK against opposing wings.

It's been a rough go for Curry, but Brooklyn needs this guy to step up. With Kevin Durant off the floor this year, Curry ranks second on the team with a 23 percent usage rate. They need this sharpshooter to play 30 minutes and take 15-plus shots with so much production on the bench, and Curry can be a $7K player in that sort of role. Sous Chef Curry has scored at least 20 DK points in four straight fixtures, scoring 25 or more in three of those.

That's awesome with the expanded role, and as long as this guy is playing 30 minutes and taking double-digit shots, Curry should be $1,000 more. A rivalry game against his brother's poor defense should fire him up, with Curry collecting at least 26 fantasy points in three of his last four matchups with the Warriors.

Dennis Schröder (FD $5500 DK $5300) just had 19 points, eight rebounds, and eight assists in his most recent outing and is capable of duplicating those sorts of lines as the Lakers starting point guard.

After a couple of cheap shooting guards, let's get a stud in there at small forward. LeBron is just that, playing some of his best basketball in his 20th year. The superstar has scored at least 37 DraftKings points in all 36 games this year, averaging 54 fantasy points per game. That's crazy because he's been doing even more since Anthony Davis went down, flirting with a 60-point average since the big man tore up his foot.

A boost in minutes, shot attempts, and usage is hard to believe from a player like this, but it makes King James tough to fade. Portland is a phenomenal matchup, too, with James averaging 58 DK points per game in two meetings this year.

Trusting Oklahoma City's rotation is a quick way to get ousted from a DFS tournament, but Williams is too cheap right now. The Thunder have been starting him over the last three weeks, with Williams averaging 24 DK points per game across 23 minutes a night over his last 11 outings. We love that from a sub-$5K player, especially since Kenrich's role is rising in the right direction.

He also flashed a 41-point ceiling just two games ago, and we've seen this guy be a $6K player in a 30-minute role in the past. A matchup with Denver should help him build off this stretch, with the Nuggets allowing the fourth-most fantasy points to opposing forwards.

Trey Murphy III (FD $5200 DK $5000) is averaging over 25 DK points per game as a starter this year and will need to keep playing 30-35 minutes with Zion Williamson and Brandon Ingram still sidelined.

I haven't always been the biggest fan of Randle's game, but this dude has changed my mind this season. The big man has taken over this Knicks offense, scoring at least 38 DraftKings points in 22 straight games. His most recent form is even more ridiculous, scoring at least 52 fantasy points in 13 of his last 16 games. He's also got a 60-point average in that span, playing 40 minutes while taking over 20 shots a game.

That's the Tom Thibodeau special, and he should continue to be a monster with that robust workload. Toronto can be a terrifying matchup for most, but Julius has dropped at least 53 DraftKings points in all three of their meetings this year.

Everyone expected Thomas Bryant to dominate the center minutes in LA with AD going down, but Gabriel had other ideas. What's really helped Wenyen is his defense because Bryant is one of the worst defensive bigs in the NBA. That has allowed Gabriel to average 25 DK points per game across 26 minutes a night over his last five fixtures. Those are tantalizing totals from a player in this price range, and it looks even better since all of the momentum is in Gabriel's favor right now.

It would be hard to imagine LA leaving Bryant out there to be feasted on by Jusuf Nurkic, and we could be looking at 25-30 minutes from Wenyen against a 19th-ranked Portland defense.

Jaren Jackson Jr. (FD $8200 DK $7300) is one of the best per-minute producers in the NBA and has scored at least 42 DK points in two of his last three matchups with Phoenix.

We've discovered some immense value on this slate, so it should be easy to squeeze in the best player in fantasy. That's Jokic, who's leading all players on this slate with 59 DraftKings points per game. This guy has been doing this for three years now, and he's in one of the best stretches of his career right now. The two-time reigning MVP has at least 51 fantasy points in 26 of his last 28 games, scoring at least 58 DK points in 20 of those.

That's hard to fathom, but it becomes more believable when you see that he has at least 80 DraftKings points in eight of those! Oklahoma City is an outstanding matchup too, allowing the fifth-most fantasy points to opposing centers. In their three meetings this season, The Joker is averaging 24.3 points, 13 rebounds, and 12 assists per game! If Jokic ends up sitting, pivot to Murray and Aaron Gordon in augmented roles.

If the Lakers leave Bryant in there, Nurk is going to be in for a big night. The Lakers are already allowing the second-most fantasy points to opposing centers, ranked third in pace, 22nd in defensive efficiency, and 27th in points allowed. That's a recipe for success for a player like Nurk, with the big man averaging over 34 DraftKings points per game this season. He's actually averaging nearly 40 fantasy points per game since the opening month, and it's no surprise since he's regularly playing 30-35 minutes a night. This guy has been a per-minute beast throughout his career, and he could be a $9K player if he continues to play over 30 minutes.

Jericho Sims (FD $4600 DK $2400) is starting at center with Mitchell Robinson injured and could be a double-double threat in this newfound role.