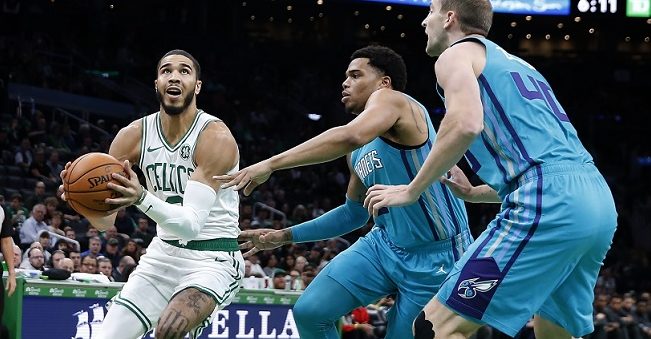 Derrick Rose FD - $4900 DK - $5600
Opponent - DEN
Proj Pts FD - 30.13 DK - 30.5
The Pistons stink, of that there is no debate. They’ve lost seven of their last eight and it doesn’t stand to get much better here on Tuesday against the Nuggets. But Rose should see somewhere around 27-28 minutes and at his current usage rate, he makes for a fine enough play at least on FanDuel at sub-$5K. He’s taken 15 and 16 shots respectively in the last two games, scoring 15 and 12 with some assists. I do think they scoring stands to tick up just a little, especially considering he’s been brutal from three, going one for his last 12 from beyond the arc. This is mostly a price play at a tougher position.

De'Aaron Fox FD - $7800 DK - $7600
Opponent - GS
Proj Pts FD - 42.79 DK - 43.07
Fox isn’t the most consistent fantasy option around and had put up a string of some rougher games before turning it around to some degree over the last two. He’s streaky from beyond the arc both in terms of volume and efficiency, which does lead to fluctuations in his scoring numbers. But he gets a great matchup on Tuesday against the Warriors who rank 25th in defensive efficiency this season. We should see 34-35 minutes out of Fox is a closer game (which might be pushing it) and Golden State has been ineffective against opposing point guards, allowing 3% more scoring than league average to the position.

I know they got smoked last time out against the Raptors, but if Victor Oladipo sat again then Malcolm Brogdon (FD $6100 DK $7100) would look like a great value on FanDuel at least.

Marcus Smart FD - $5300 DK - $6100
Opponent - POR
Proj Pts FD - 32.24 DK - 32.51
Kemba Walker has already been ruled out of Tuesday’s game against the Trailblazers, paving the way for another Marcus Smart start in the backcourt. Smart has played 35 and 36 minutes over the last two games with a 12 point, six rebound, five assist average while getting up double-digit shots in both. The price is still very affordable considering the opportunity and, if anything, these averages feel close to the floor of his expected production at this many minutes. He’s not going to be a high usage guy in the offense, but he contributes across enough of the stat line that he has a peak game in him especially against a defensively compromised Portland team.

C.J. McCollum FD - $8500 DK - $9000
Opponent - BOS
Proj Pts FD - 41.31 DK - 42.54
He’s under Smart here because I am a little worried about the price finally ticking up enough to account for the opportunity he’s seeing with Damian Lillard off the court for Portland. That being said, McCollum is coming off a 30-shot night against the Pistons in which he played 43 minutes in regulation and scored 41 points, handed out 12 assists and also brought down nine rebounds. Considering the kind of usage he sees with Lillard out of the mix, C.J.’s price may not have come up enough. But Boston is the 4th-ranked defense in the league and have such excellent on-ball defenders (like Smart) that I get a little worried they’ll work overtime to take McCollum out of the game as much as possible.

Gordon Hayward FD - $6600 DK - $7400
Opponent - POR
Proj Pts FD - 38.63 DK - 39.57
I’m still all for stacking Celtics with Kemba Walker out seeing as how the latter leaves quite a bit of usage and on-ball time on the floor when he’s out. Against the Lakers on Sunday, Hayward and Brown played 40 and 39 minutes respectively in a close game, further evidence that the Celtics have no issue pushing the starters late season as they fight for playoff seeding in the East. Hayward nearly triple-doubled with 10 points, nine assists and eight rebounds. He definitely takes over more ball handling duties with Walker out and is averaging seven assists per game over the last two.

Meanwhile, Brown put up the second-most shots on the team (19) against LA and with Walker off the floor this season has the second-highest usage rate (27%) on the team. He’s affordable on both sites and the Blazers are allowing worse than average production to opposing SG/SF types this season. I expect Brown to get up a lot of shots in this game with the minutes in the upper 30’s if the game stays close.

T.J. Warren FD - $5900 DK - $6200
Opponent - CHA
Proj Pts FD - 32.55 DK - 32.17
If Oladipo sits again then I think Warren would make for one of the best mid-tier value plays on the slate. And even if the former does play, with Jeremy Lamb now done for the year I expect Warren’s minutes to trend in the upper thirties regardless. That’s what he’d played the two previous games before the Pacers got dumpstered but the Raptors on Sunday. Warren ran 37 and 39 minutes against the Knicks and Bucks respectively with 27 and 35 points and an average of 7.5 rebounds in those two. Like I said, we can get aggressive with Warren’s minutes right now because the Pacers are a little thinner at the wings.

Jayson Tatum FD - $8800 DK - $8800
Opponent - POR
Proj Pts FD - 43.01 DK - 43.46
Tatum’s having something of a moment right now, putting together the best month of regular season basketball of his young career. Since February 1st, he’s averaging 30 points and seven rebounds per game on 48% shooting from the field and 47% from three while also getting to the line eight times per game. He’s been in takeover mode for the the Celtics of late and will have a chance to keep it going against Carmelo Anthony’s “defense” and a Blazers’ team ranked 26th in the league in defensive efficiency. Sure, the price is up but it’s on the back of Tatum’s performance and he’s still something of a bargain on DraftKings.

Anthony Davis FD - $10600 DK - $10300
Opponent - NO
Proj Pts FD - 55.54 DK - 55.19
Davis has crushed coming out of the All-Star Break with an average of 30 points and 13 rebounds and nine total blocks in the two games last week. On Tuesday he gets a fantastic matchup at home against the Pelicans who run the third-fastest pace in the league and have a 109 defensive rating. The Lakers have the highest opening implied team total of the slate at 128 and we could see Lebron and Davis as a popular cash stack considering just how much of the fantasy production they control for this team.

After Tatum, things get a little tricky at power forward without some definitive injury news around certain players. If Draymond Green were to sit again then I think Eric Paschall (FD 4500 DK 5000) is in play on both sites. He played 31 minutes last game out in the start for Green.

Domantas Sabonis (FD 8300 DK 9000) has as high a minutes floor as any big man in the game, running 37 or so when the games stay close. He isn’t cost prohibitive on either site and has double-doubled five of his last eight games. .

Hassan Whiteside FD - $9600 DK - $9200
Opponent - BOS
Proj Pts FD - 47.8 DK - 47.27
It might be tough getting overexposed to the Blazers on this slate because of how good the Celtics are on defense this season, but the center position is a thin one on both sites (though DK is a bit easier with some more PF/C options). White side is getting expensive, but the Blazers do seem to need every minute out of him in close games. He’s basically a guaranteed double-double out of the gate and will run 35-36 minutes in close games with the ability to pile on blocks when things are going well.

Steven Adams FD - $6500 DK - $6700
Opponent - CHI
Proj Pts FD - 33.42 DK - 33.98
Adams is more of a cost-efficient option on this slate if we want to get out of the center a little cheaper. He’s been very good over the last two weeks averaging 15 points and 13 rebounds in his last four games. That’s more than enough production to make him cash game viable at these prices and he draws a Bulls team with a very weak interior defense.