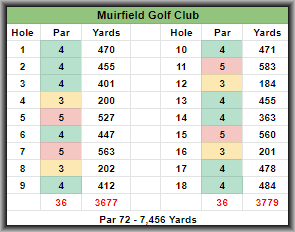 Welcome back golf fans. This next couple of weeks presents a very interesting set of circumstances as there will be back to back events played on the same course. With the John Deere Classic canceled due to the coronavirus pandemic, the PGA Tour stepped up and created the Workday Charity Open to be played at the Jack-Nicklaus-designed Muirfield Village Golf Club.

We get another strong field this week headlined by five of the Top 10 players in the World in Jon Rahm(#2), Justin Thomas(#5), Brooks Koepka(#6), Patrick Cantlay(#8), and Patrick Reed(#9). In all there are 23 of the Top 50 players in the world and only consists of six players(Chase Koepka, Kevin Stadler, Jerry Kelly, Brandon Wu, Nicky Taylor, JB Holmes) who have yet to tee it up since the Tour returned.

With Muirfield Village being used annually for the Memorial, we do have a ton of course history to look at but things won't be identical to what we have seen in the past. There are new tee boxes on three holes(#8, #11, #15) which have added about 70 yards to the scorecard. There have also been new fairways bunkers added on six holes, as well. Per the quote below, it appears the course WILL play a bit different not from this week to next but also day to day to help keep it in great shape as we have never had back to back PGA Tour events on the same course.

Looking at past stats using all of the research tools I have put together on the sheet, I am looking at Strokes Gained: Tee to Green with a larger emphasis on Approach over Off the Tee and Around the Green. When breaking that approach shot data down, I am also leaning heavily on the Proximity ranges of 175-200 and 200+ yards with nearly 50% of the approaches coming from that range(sample of 55,000+ approaches via Fantasy National Golf Club). The Off the Tee stat I am most interested in is Good Drive % which is a combination of fairways hit + green or fringe in regulation when missing the fairway. It has correlated very high here in each of the last three years. One stat I am not too worried about this week is putting as we have seen the top of these Memorial leaderboards littered with bad to borderline terrible putters going in(Grillo, Streelman, Dufner, An to name a few) who had an above-average week in that area and made it pay off.

With all that said, let's dig in and take a look at some of my core plays in each price range.

The top tier is very interesting this week. Thomas is priced at the top coming off a missed cut and has really struggled on Bent/Poa greens lately. Rahm has yet to crack the Top 30 in three events back, Brooks has overperformed with the putter while Hideki has vastly underperformed.

For me, I am settling right in the middle of that top tier($10k+) with Patrick Cantlay who we discussed on the podcast going into the Travelers. It was his first event and I was somewhat concerned with that while the system was 100% on board with the play. Turns out the system was right as he finished T11 after a four-month layoff gaining strokes in all strokes gained areas. He took a week off and is now returning to Muirfield Village where he won the Memorial last year and finished T4 the year before. I am fully on board with Cantlay this week in all formats.

Hovland falls to #16 in my overall model this week but if I remove Course History(he has none) he rises all the way to #2. He leads everyone in this field in Tee to Green since the return and he has played all four events. Not only played them but been very consistent with finishes of T23, T21, T11, T12 returning at least 9x value in each event. Like I keep mentioning over and over with Hovland, once he figures out that flat stick(lost 6.8 strokes on greens last two weeks) he will be back in hoisting another trophy. I will have exposure in all formats for DFS and will also have an outright bet on him, as well.

Also Consider: Justin Rose in all formats who has won here at the Memorial and finished T13 or better in eight of his last 10 trips and is too cheap at $9,700 on DraftKings. I also like Justin Thomas as a lower owned GPP pivot in this top tier

I was really torn with this pick as Leishman has struggled since the return with a missed cut at the Charles Schwab Challenge and T58 at the Travelers Championship. Despite the poor results, he has gained 7.4 strokes on approach and ranks Top 10 in both Proximity from 175-200 and 200+ yards. He also returns to a course he absolutely loves finishing Top 15 in four of his last five trips to the Memorial with a T5 last year. I think he finds form this week and is a core play for me in all formats, especially on DraftKings in the mid $8K range. He is also one of my two one and done picks this week.

Dahmen comes in 10th in my overall model and keep in mind that includes a less than stellar T68 here at the Memorial last year. What stands out more than anything are his performances since the return of golf posting finishes of T19, T48, and T20. Looking at just this field, he ranks 11th in SG: Tee to Green, 7th in SG: Approach, 3rd in Par 4 Scoring, 4th in Opportunities gained, and 14th in Birdie or better % since the return. At these prices, that is more than enough for me to include him in my player pool in all formats.

Also Consider: Cameron Champ who is 7th in this field in SG: Tee to Green, 3rd in Birdie or Better %, and 27th in both Par 4 and 5 scoring

When building cash game lineups, I rarely venture down into the $6K range and stick to a more balanced build but Werenski is one player I would consider in a stars & scrubs cash build this week. He has made seven of 10 cuts this season including three straight since the return trending up each week with finishes of T58, T46, and T21 last week. he has struggled on the Par 4's and been very up and down with the approach shot but has been putting very well and tearing up the Par 5's(19th in this field since return). He is not the longest driver on tour but that is fine as his long iron game is excellent as he ranks  21st and 40th in this field in Prox from 175-200 and 200+ yards.

When looking at ownership projections in the value range this week, Henrik Norlander is off the charts leading all golfers under $7,500 on DK in tag count on FanShareSports. It makes sense as he ranks #2 in SG: Tee to Green since the return and while I will have some exposure, I will most likely be underweight as I never like super chalk in the value range. For me, I will be pivoting to Swafford who has seen just one tag so far and could be easily sub 5% owned. He missed the cut at the travelers in his first event back in 3+ months but rebounded nicely last week with a T30 and 84 DK points for an incredible 13.1x return. Statistically, he ranks 30th on my sheet in SG: Approach highlighted by ranks of 16th and 26th in Proximity from 175-200 and 200+ yards. Sign me up in all formats.

Also Consider: Sam Burns who has posted finishes of T30 and T24 in the last two weeks and even with a missed cut at the RBC Heritage, still ranks 36th in this field in SG: Tee to Green and 17th in Birdie or Better %