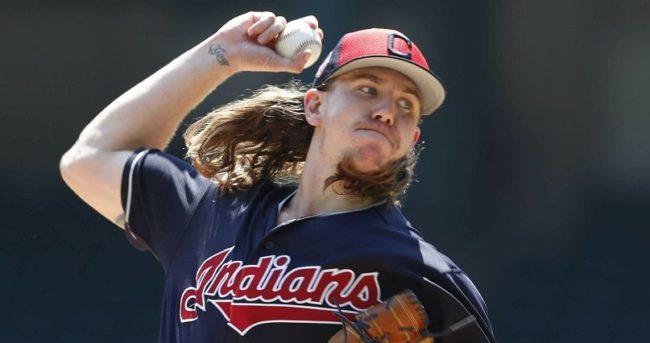 Baseball is fully back and we've got a packed afternoon at the ballpark. Most games are going off between 1-4 EST and we've got you covered with DraftKings and FanDuel picks.

Mike Clevinger FD - P 10400 DK - SP 9800
Opponent - KC (Brady Singer) Park - CLE
FD - 40.43 DK - 22.3
Clevinger was just flat out awesome in 2019, posting a crazy-high 12.07 K/9, getting under control by significantly lowering his walk rate and posting a 3.09 xFIP. He went almost exclusively fastball/ slider, throwing the latter much more and to great effects. On Saturday he enters as a -240 favorite against a very weak Royals team. He's completely mispriced on DraftKings especially considering what he did last season.

Luis Castillo FD - P 9800 DK - 8000
Opponent - DET (Ivan Nova) Park - CIN
FD - 39.02 DK - 21.23
Castillo took a step forward in 2019, getting his K’s from about a strikeout an inning through his first two seasons up to 10.75 per nine. It meant ticking the walks up though and he did allow 3.7 free passes per nine. But the 3.48 xFIP was well above average and he was able to go about six innings per start even pitching in one of the best hitters’ parks in baseball. Detroit is in some lean times right now and barely rosters a major league lineup. Piggy in the middle of the lineup is toast and the rest of the lineup has a propensity to strike out. I love Castillo on DK as a SP2.

Originally, we had Julio Urias written up because he was the scheduled starter for the Dodgers against the Giants. That's been changed to Alex Wood (FD $6800 DK $7800) who comes in as a solid SP2 candidate if the expectation is he gets a moderate pitch count load.

Lance McCullers Jr. (FD $8000 DK $8500) is a monster favorite today as well, -283 against the Mariners. I'm just a little concerned about how deep he goes in the game because he hasn't pitched in almost two years at this point.

Carlos Santana FD - 1B 3300 DK - 1B 4500
Opponent - KC (Brady Singer) Park - CLE
FD - 13.29 DK - 9.88
Brady Singer is making his major league debut for the Royals on Sunday which puts the Indians in a great spot. They have the second-highest implied run line at 5.57. The 34 year old Santana is coming off his best season, posting a career-best .912 OPS and tying his single season home run mark with 34. He’s always taken walks at an elite level with a 15% BB rate for his career. Dude is still firmly entrenched in the middle of the lineup and the Indians as a whole make for one of the slates’ best stacking options.

Max Muncy FD - 1B 3700 DK - 1B/2B 4400
Opponent - SF (Undecided) Park - LAD
FD - 13.2 DK - 9.77
For the second day in a row the Giants don’t even know who is starting the game for them with fewer than 24 hours to go. On Friday they announced Tyler Anderson in the early evening. Who even knows what Saturday holds? But it can’t be anyone good and that’s going to put the Dodgers in play again. Muncy could hit leadoff against a righty and wouldn’t move lower than two even against a lefty. He’s coming too cheap on both sites at the top of this potent Dodger lineup. Just keep an eye out for who San Fran plops on the mound.

Cesar Hernández FD - 2B 2500 DK - 2B 3700
Opponent - KC (Brady Singer) Park - CLE
FD - 11.96 DK - 9.25
Going to be easy to fall in love with the prices on the Indians for this afternoon of baseball. As expected, Hernandez started the season in the leadoff spot for Cleveland on Friday. He’s been a 10% walk guy for his career, and in general is tough to strike out at 18% (down to 15% last season). Coming super cheap on both sites, but especially FanDuel, Hernandez is an excellent play hitting in front of the likes of Lindor, Ramirez and Santana. He makes it easy to fit some of the higher-priced pitching options on the slate.

Mike Moustakas FD - 2B 3200 DK - 3B 4300
Opponent - DET (IvÃ¡n Nova) Park - CIN
FD - 13.11 DK - 9.87
Moustakas came over to the Reds in the offseason and helps strengthen the middle of the Cincy lineup. He started paying dividends early with a home run in his first game on Friday. He’s very tough to strikeout, especially for righties and has hit over 30 home runs in two of the last three seasons. the 9% walk rate in 2019 was the best of his career which helped him to a career .845 OPS. Great American Ballpark plays as one of the best hitting pads in baseball and though Ivan Nova does induce a lot of grounders, this is still a spot to stack Reds.

Francisco Lindor FD - SS 3900 DK - SS 4900
Opponent - KC (Brady Singer) Park - CLE
FD - 14.89 DK - 11.34
Like I said, get used to the Indians on Saturday. It’s not tough to make a case for Lindor as a great play considering he’s been a mid-.800’s OPS shortstop for the last three seasons, strikes out at an insanely-low 14% rate, is coming off back-to-back 20+ stolen base seasons and also has more than 30 home runs in each of the last three years. Dude is just a fantasy beast and should be a cash game staple on this big afternoon main slate.

Paul DeJong FD - SS 2800 DK - SS 4000
Opponent - PIT (Trevor Williams) Park - STL
FD - 12.16 DK - 9.18
I see Lindor as the clear cash game play for Saturday, but there are definitely some other names to consider here. DeJong is coming entirely too cheap on both sites considering he’s occupying the clean up spot even against righties. Trevor Williams was terrible last season, positing a 5.25 xFIP and striking out less than seven batters per nine. DeJong was actually better against righties last season posting a 104 wRC+, 20 points higher than his number against lefties. The OPS was 100 points higher in that split as well.

José Ramírez FD - 3B 3600 DK - 3B 5100
Opponent - KC (Brady Singer) Park - CLE
FD - 15.85 DK - 11.95
Wrote about Ramirez as a cash game play for Friday’s slate and he’s in arguably a better spot here on Saturday. As mentioned, he really turned things around in the second half of 2019, bringing the numbers more in line with the 2018 MVP run. So while the beginning of last season was totally and completely brutal, he was able to clear the injuries and return to his normal mashing self. The price is a little steep on DraftKings, but on FanDuel he rounds out the indians’ stack we’ve been talking about.

Josh Donaldson FD - 3B 3000 DK - 3B 4500
Opponent - CHW (Dallas Keuchel) Park - CHW
FD - 13.56 DK - 10.05
Donaldson moved over to the Twins in the offseason but presumably brought his lefty-mashing skills with him in the transfer. For his career, he has a .951 OPS and .403 wOBA against lefties with a 14% walk rate and 17% K rate. He’s an impossibly tough out for southpaws and that could be a problem for Dallas Keuchel who’s moving in the wrong direction xFIP wise and doesn’t get a lot of swings and misses to begin with. Donaldson is coming way too cheap on FanDuel considering his historical splits.

Michael Brantley FD - OF 2900 DK - OF 4000
Opponent - SEA (Taijuan Walker) Park - HOU
FD - 13.25 DK - 10.13
Taijuan Walker has pitched a total of 14 big league innings in the last two seasons and doesn’t looked poised to capitalize on the promise he had with Mariners after coming up. The Astros are going to be one of the best offensive options on a nightly basis (banging on trash cans or not) and that’s no different on this slate. They get to face one of the riskier arms and have the highest implied run line at six even. Springer posted a whopping .974 OPS in 2020 with a career-best 39 home runs. The 30% Hr/FB rate probably isn’t sustainable, but even regression there has him as one of the best hitters in the game.

Meanwhile Brantley continues to be one of the best contact hitters in the game, putting the ball in play 82% of the time last season, hitting 22 home runs and finishing with a .367 wOBA, the third-best mark of his career. Hitting in the top four of this Astros’ lineup is a gift and he’s coming too cheap on both sites considering the skill set and the surrounding hitters.

Andrew McCutchen FD - OF 2800 DK - OF 4500
Opponent - MIA (Caleb Smith) Park - PHI
FD - 14.09 DK - 10.58 Caleb Smith can dial up the strikeouts, but the rest of his numbers leave a lot to be desired. He finished last season with an xFIP over 5.00 and walked more than 3.5 batters per nine. He also allowed nearly two home runs per nine despite pitching in a pitchers’ park. Mccutcheon has tuned up lefties for his career, rocking a .946 OPS and .403 wOBA in that split. He’ll stick in the leadoff spot for the Phillies especially against the lefty and is a good points per dollar value on FanDuel.