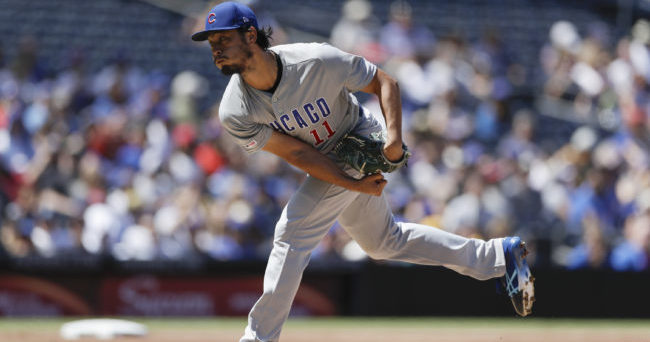 Darvish bounced back after an opening day loss with a terrific performance against the Pirates where he allowed just two hits over six innings while striking out seven and walking one. He got up to 86 pitches which is positive and I feel he gets over that 90 pitch mark tonight in another plus matchup justifying his price on DraftKings. He will face a Royals team that sits in the basement of the American League and went into Tuesday night with an 87 team wRC+(24th) and .293 wOBA(22nd). The Cubs are huge -220 favorites and Darvish is my top pitcher in all formats on both sites.

The Twins improved their major-league best record on Tuesday moving to 9-2 on the season and in large part to a starting rotation that has posted a sub 3.00 ERA. Tonight Randy Dobnak take the ball as the Twins open as -180 road favorites in Pittsburgh against the Pirates who currently sit 2nd to last in team wOBA(.251) and wRC+(59). Dobnak got up to 94 pitches in his 2nd start of the season and shutout the Indians over five innings putting up 20.3 DK/33 FD points. Combine the matchup and price tag and you have my top PTS/$ play at the pitcher position.

The Rockies, at home in Coors, lead the way in implied runs once again and it makes sense to go back to the well as there have been an average of 12.5 runs over the first four games with the home team averaging over seven per game. As of now, the Giants are projected to start Logan Webb who hasn't gone deep into either of his first two starts and while he only gave up two runs, he gave up 10 hits in 7.2 innings. While a small sample size, he has really struggled vs. lefties so that is where Murphy comes into play. He hits 5th in the order and has started the season on fire with a .346/.414/.500 slash line. Fire him up in all formats.

If fading Coors with a more balanced approach is your jam(and it very well could be mine), Yuli Gurriel is the direction I am headed at first base. The Astros open as -151 road favorites in a Top 10 hitters park in Arizona and face a struggling Robbie Ray who has given up eight earned runs in his first two starts including three long balls. For Gurriel, it has been the opposite as he has been very consistent to start the year as he went into Tuesday with hits in four straight with three mutli-hit efforts and has a .294/.405/.412 slash line through nine games. He is in play in all formats, especially on FanDuel at a price south of $3K.

Second base is a bit of a mess tonight as Altuve is still struggling, hitting under .200, McMahon is overpriced due to Coors, and if I had to choose a top tier option it would be Hiura but he gets a tougher matchup vs. Keuchel. The list goes on at the top and for this reason, I will be taking a value/punt approach at the position and it will ultimately come down to spot in the lineup and weather so stay tuned closer to lock. Here are two names I will be keeping an eye on as we approach lineup lock.

Outside of Coors tonight, the Cubs are my top team to target as they will face Kris Bubic who, thanks to COVID-19, has made the jump from A+ ball to the majors in 2020. He faced the other Chicago team in his first start going four innings giving up three hits and there runs(two earned) allowing a long ball. He gets another tough test tonight facing a Cubs team is 6th in runs scored and is Top 10 against southpaws early in the season.

The other option is Luis Arraez who started off hot with hits in his first five games but has struggled since going hitless in four straight going into Tuesday. At these prices, I am willing to go back to Arraez as the Twins have a plus matchup against Trevor Williams and struggling Pirates.

Like I mentioned above, the Cubs are right up there with the Rockies for me tonight and likely get the nod in cash games as the ya re collectively cheaper and easier to build around. It starts with Javier Baez who has been up and down to start the year but flashed his huge upside with three home runs and absolutely destroys lefty pitching(.391 wOBA, 142 wRC+ in 2019 and is 4 for 11 to start 2020) and should get at least two at-bats vs. Bubic. In play in all formats.

Looking at the boxscore alone, you think I am crazy for suggesting Polanco who has not hit double-digit points in seven straight but things haven't been nearly as bad as that looks. Overall, he is hitting .289 with a 97 wRC+ which is just slightly below league average but what stands out is that he already has five mutli-hit games in his first 10 played and hits near the top of the lineup on a very powerful Twins offense in a plus matchup. At a price that continues to drop and is now below $4K on DraftKings, Polanco is in play in all formats for me tonight.

Third base is another difficult position in that most of the top guys(Arenado, Bregman, Rendon, Chapman) have struggled to start the year while most of the mid-tier guys I like have less than ideal matchups. That leads me back to the Cubs and Kris Bryant who is the 6th most expensive 3B on DraftKings and 4th most expensive on FanDuel. Some may say that is still too expensive and I sort of agree but I am not overly worried this early with his long track record and a career .283/.384/.514 slash line. Most importantly, the Cubs are in a great spot tonight, Bryant hits lefties very well, and hits leadoff this season giving him a ton of opportunities for fantasy points. Fire him up in all formats.

Amazing have I have gone this long without taking a trip to the Southside of Chicago where the White Sox sit 4th overall in runs scored(56) and 3rd in both wOBA(.353) and wRC+(132). Moncada hits second in the lineup and has played a huge role early on with hits in seven of 11 games including four multi-hit efforts and a .351/.442/.595 slash line. He is a switch hitter but has better career numbers from the left side, especially in the power department. I will have exposure in all formats.

Another big part of the White Sox early success has been the Luis Robert who has finally burst onto the major league scene after being paid all the money. He started out hitting 7th for the first week and has quickly become the everyday leadoff man thanks to posting a hit in all but one game this season and enters Wednesday night with a  .364 average and wOBA north of .420 on the season. If he keeps up this level of play, the price will continue to go up so jump on board now while he still remains in the mid-tier.

While the matchup isn't at the top of my list, Pollock stands out as he is underpriced for the value he is returning early on the season. His place in the Dodgers stacked lineup has been inconsistent but his bat has not been with hits in eight of 10 games for doubles and three home runs. The Dodgers are middle of the pack in terms of implied runs tonight but will likely come low-owned if you want to full stack them but I also like Pollock as a one-off in all formats for salary relief, especially if he gets another crack near the top of the lineup.