Chris will be bringing you weekly PGA picks, analysis, and breakdowns to help you cash on DraftKings and FanDuel. As every week in DFS PGA changes with the course setup, field of players, and weather, Chris will be providing a range of different picks for cash games as well as upside plays for tournaments. Want more? He also provides a cheatsheet with stats, course history, current form, player write-ups for cash and GPP, a customizable model, and much more.

This year's event may feel a bit different with the TOUR Championship and 2019-20 season wrapping up two weeks ago but one thing remains the same. This championship will be the toughest test these golfers will face all year. The venue rotates each year and we are in for a treat in 2020 as the U.S. Open shifts back to Winged Foot Golf Club for the sixth time and the first since 2006 where Phil Mickelson gifted the trophy to Geoff Ogilvy after double-bogeying the 72nd hole.

Winged Foot is an absolute beast and best put in two famous quotes:

“We’re not trying to humiliate the best players in the world. We’re simply trying to identify them” said USGA president Sandy Tatum back in 1974

I don't quite remember the course in detail from 2006(cut me some slack, that was 14 years ago and I forget what I ate for breakfast yesterday) but reading player quotes, watching the flyover video, and seeing reports on social media tells me this will be a bloodbath. The fairways are narrow, the rough looks impossible to play out of, and even the "safe" landing zones off the tee are protected by tons fo bunkering and/or large trees that will block the second shot if not placed in the correct spot. Then you have the greens in which Jack Nicklaus once said are "the most difficult set of greens I've ever seen". They can, in a way, be compared to Augusta with very fast speeds and tons of undulation but what makes them harder is that they are Poa Annua and will also be much bumpier as the tournament being played in the fall.

From a statistical standpoint, a strong Tee to Green game is going to be needed to not only make the cut but to sniff the leaderboard on Sunday. Players will need to be accurate off the tee to avoid the rough and other dangers but can't lay back to much as this course is a beast. With accuracy on player's minds, this will produce a ton of long iron shots in the 200+ yard range, especially considering nine of the Par 4's are over 450 yards and five of them over 480 yards. I would not expect the average greens in regulation to top 55% this week so that immediately bumps up the importance of scrambling and strokes gained: around the green. Finally, I will be looking at putting performance on Poa greens(see sheet for putting splits) and adding in some three-putt avoidance.

With all that said, let's get into a few core plays in each price range. 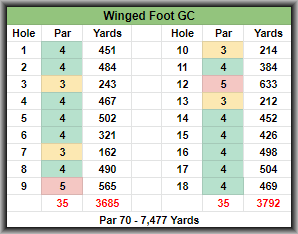 I have been debating my top U.S. Open pick for weeks now and have gone back and back forth about 100 times but have settled on Rahm for multiple reasons here. Dustin Johnson and his four straight Top 2 finishes including two wins have somewhat overshadowed just how good Rahm has been. He ended up finishing T4 behind DJ at the Tour Championship after beating him out in a thrilling playoff at the BMW. For the most part, since the return, we had bridie-fest golf but two events(the Memorial & BMW) in particular played especially hard Rahm won both of them. In fact, looking at performance in difficult scoring conditions(via FNGC), Rahm ranks #1 gaining an average of two strokes total per round on the field(last 24 rounds). All things considered, Rahm is my top DFS pick in all formats and also my one and done pick.

After taking a week off at the BMW, it took Webb a couple of rounds at the TOUR Championship to get back into form and that makes me feel warm and fuzzy inside as he was always going to be a core play for me at the U.S. Open. He is coming off arguably his best season on Tour winning twice(WMPO, RBC Heritage) and posting eight Top 10's in 14 events. Statistically, he finished the season 16th in SG: Tee to Green, 1st in Birdie Average, and first in Bogey Avoidance. He is very accurate off the tee(6th in this field) and has a plus long iron game as well ranking 21st and 6th in Proximity from 175-200 and 200+ yards. He has an elite all-around game, has won a U.S. Open before(2012) and at a price below $10K, is my core piece in cash games and an excellent play in all formats. I will also be betting him outright and Top 10 this week.

Hatton comes in at #13 in my model and there is a lot to like starting with the mid-tier price on both sites. He missed the cut in his first U.S. Open back in 2017 but has since put together finishes of T6 and T21 and comes in with the tremendous form having made the cut in six of seven events since the return of golf with two Top 5's and four Top 25 finishes. Speaking of form, he has been extremely consistent on the PGA Tour making 37 of 44 cuts over the last three years. Statistically, what stands out the most is the iron game as he ranks in this field 8th in SG: Approach and 1st/8th in Proximity from 175-200 and 200+ yards. Finally, looking at performance in events with difficult scoring(last 24 rounds), Hatton is second behind Rahm gaining an average of 1.8 strokes total. At these prices, Hatton is one of my favorite DFS play this week.

Oosty is a player who feels greatly underpriced relative to his U.S. Open pedigree as he finished T7 last year and has tallied a Top 25 in five straight. He also comes in with some nice form with a Top 25 in three of his last four events, has made the cut in eight of nine events since the return, and ranks 23rd in this field in DraftKings scoring average over the last five events. All things considered, he is a great cash game play and at his price, comes with a lot of upside.

Hughes has missed the cut in his only two appearances at the U.S. Open(2018, 2013) but he has never entered with this kind of form. The season didn't start that positive as he missed nine of the first 11 cuts and the two other finishes were T55 and T65. Things turned around at the Honda Classic where he finished 2nd with a terrific 66/66 weekend but then COVID hit. He missed the cut at the Charles Schwab upon return but has since been on a run making nine straight cuts with three Top 10's and five Top 25 finishes. The other thing that stands out with Hughes are his performances on tough courses as he ranks 8th in SG: Total over the last 24 rounds playing in difficult scoring conditions. This shone through recently as he finished T10 at the BMW Championship and T6 at the Memorial, the two toughest events by far since the return. Fire up the Canadian in all formats.

Reavie is coming off a T3 at the season-opening Safeway Open and has been very consistent since the return of golf making eight of 10 cuts with two Top 10's and four Top 25's. While he doesn't have the distance you may be looking for a U.S. Open, he has had success with a T3 at Pebble Beach last year and a T16 at Erin Hills in 2017. It makes sense as he has been terrific in difficult scoring conditions ranking 16th in SG: Total over the last 24 rounds in those tough conditions(via FNGC). At these prices, I will have a lot of exposure to Hughes and Reavie in all formats.