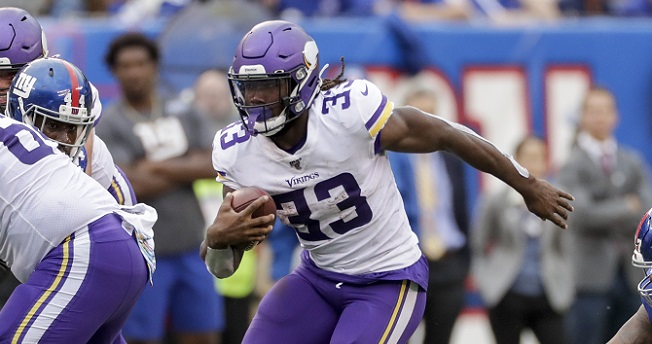 The Texans’ season hasn’t gone exactly to plan which is something of an understatement. They are 1-6, have already fired their coach/GM and there’s not a lot of hope on the horizon. But there is reason to suspect Watson can put up points in this matchup. He’s getting to face the worst defense in football in the Jacksonville Jaguars who rank 32nd overall and 32nd against the pass as well. This is the dream matchup for Watson who has been (fantasy-wise) awesome since O’Brien exited. Over the last four games, Watson is averaging 326 passing yards and 2.75 passing touchdowns per while also getting out for 25 yards on the ground. He’s right back to being one of the elite fantasy quarterbacks, something we didn’t see over the first few weeks of the season. Considering how bad the Jaguars are on D, this would be a tough fade in cash games.

To be clear, I think Watson is the clear choice for cash games this week considering the matchup and just what he’s been able to do under the coaching regime. That being said, I think there’s going to be enough value elsewhere to almost have to pay up for one of these top-tier quarterback options. Murray definitely fits that bill this week. On the season, he’s the second overall FanDuel points-per-game scorer and gets it done in every phase of the game. He leads all quarterbacks in rushing yards (437) and rushing touchdowns (7) which helps make up for being merely middle of the pack when it comes to passing touchdowns. Miami has been an above-average defense on the season and is much better against the pass which gives Watson the matchup edge this week. But Murray has as high a floor as any player in the game right now and has been remarkably consistent to start the season.

Again, just to reiterate, I don’t want to pivot too hard off of Watson. But if you are looking for a slightly different direction to go at a bit of a discount Herbert offers that opportunity. He’s a top-10 per-game fantasy scorer since taking over under center for Tyrod Taylor in Week 2. He has a 15:5 TD: INT rate and is averaging over 300 passing yards per game on the season. And like Watson, he gets a choice matchup against the Las Vegas Raiders who rank near the bottom of the barrel on defense this season. They allow a bottom third yards-per-pass attempt. Outside of last week which had major weather implications, the Raiders have allowed opponents to score 30 or more points in six of their previous seven games. If Jacksonville is the dream matchup, Las Vegas isn’t too far behind.

Alrighty then! In a game where Cook was coming back off an injury as a serious underdog, he turned in 226 yards and 4 touchdowns. This is an even better spot than last week, with the Vikings sitting as 4 point home favorites against the Lions, who own the 8th worst DVOA against the run this season. With Derrick Henry facing a bear(!) of a defense in Chicago, Cook looks like the clear best big money option this week.

Kenyan Drake has already been ruled out for week 9, leaving Chase Edmonds the RB1 duties in Arizona. We got a glimpse of what Edmonds is capable of in the Seattle game, when he put together 145 total yards on 12 touches when Drake went down. He looks like he could be a prolific catch passer, and adding RB1 carries only sweetens the deal. Miami has been by far the worst team in the league in terms of DVOA against the run this season, and at sub $7k prices Edmonds looks like an auto-play in cash games.

Is it too much to assume that we finally saw the plan for Gibson in a normal game script against the Cowboys? Well, normal games for the Football Team won't involve them winning, but Washington is a 3.5 favorite heading into this one as well. Gibson carried the ball 20 times for 128 yards and a touchdown against the Cowboys, and while Barber and McKissic combined for 15 touches themselves, Gibson is clearly the lead back. I'd also argue that he could have had more opportunity if the Cowboys had deigned to keep the game close. I love him as a cheap option against the Giants here, though it isn't the safest play on the board.

Also considered: Derrick Henry is probably still a good play even in a tough match-up. I also think there is a strong argument for David Johnson in a great match-up with Jacksonville.

Terry McLaurin is an excellent receiver, he’s just had the unfortunate issue of not having played all that much with competent quarterbacks. That could be, maybe, turning around with Kyle Allen under center who’s at least looked serviceable since taking over for Haskins. Allen has a 69% completion percentage and 4:1 TD: INT rate. McLaurin has seen double-digit targets in three of the last four games and put up a 7/90/1 line against the Cowboys in Week 7. The Giants are significantly worse against the pass this season, ranked 27th in DVOA through the air. This is a smash spot for McLaurin who could be set for a definitive price increase if Allen is able to remain an above average arm.

Though it seemed like Will Fuller would take over as the Texans’ WR1 in the absence of DeAndre Hopkins, it’s actually Cooks who leads the team in targets through seven games. Over the last three he’s been particularly good with 9, 9, and 12 targets with one peak game against these aforementioned Jaguars in Week 5. It was then that he put up an 8/161/1 line in a world-beating week. Let’s go back to the well with Cooks who draws the fantastic matchup once again. I suspect he sees plenty of ownership considering he’s priced as WR24 on FanDuel. That’s just ridiculous.

Calvin Ridley left Week 8’s game against the Panthers with a foot sprain and he’s expected to miss this week which would then carry him through the bye in Week 10. That leaves the 10th-most targeted wide receiver out of the game with the slack picked up by the rest of the crew. I’m only a few weeks away from calling Julio Jones washed which is looking like an increasingly bad take each game since. He’s averaged 10 targets a game over the last three, looking healthy in a way he didn’t seem earlier in the season. In fact, in two of those weeks, he has identical 137-yard games on seven and eight catches respectively. The matchup against Denver isn’t completely ideal, but Jones could easily see double-digit targets once again considering how much the Falcons throw.

Meanwhile, Gage is a bit more speculative and has had more of an up and down season thus far. He’s had some injury issues of his own but did have a monster 12-target game in Week 1. In Week 8, Gage recorded the second-most WR snaps after Jones and should be the next guy up with Ridley out of the lineup. Again, he isn’t nearly as safe as Jones in this situation, but the price difference reflects the variance.

Kenny Golladay is going to miss Week 9 against the Vikings with a hip injury. He left very early in Week 8 against the Colts and the Lions wasted little time ruling him out for this week against the Vikings. Golladay wasn’t seeing an overwhelming target share since returning from injury but was getting north of six looks per game. With the injury news coming late, the sites didn’t have a chance to correct the Detroit wideouts with the news and both Jones and Hall are coming cheap. Both are coming off seven target weeks last time out. Jones played 60 of the 61 offensive snaps and finished with a *meh* 3/39 line BUT caught two touchdowns. I think we could see 7-8 targets in this game which would make him an easy play at his price points.

Meanwhile, Hall, not Quintez Cephus, was the next man up in the Lions’ WR corps and finished with a very solid 4/113 line. He’s coming near the minimums here and should be a high-floor play at his salaries. Look, I get we are coming off a week of dartboard throws around cheap wide receivers, most of whom didn’t pan out. That’s not lost on me. But this situation is a bit more *known* that what we were looking at in in Week 8.

With Kittle sidelined, Kelce is the only big money tight end left on the board. And honestly, he's shown flashes of being worth it. With 19+ FanDuel points in three of his last four games, he's providing a level of consistency that really isn't matched at tight end right now. He's somewhat touchdown-dependent, but in an offense that churns out touchdowns like it's going out of style. I'm not sure you'll actually have the money for Kelce this week unless we get some solid punts, but he's worth it if you do.

Hockenson is a guy whose targets are headed in the right direction, averaging 6 catches on 8 targets over the last two weeks. Three of his four touchdowns have come in the last 4 weeks as well. With so little going well in the Detroit offense, Hockenson is a worthwhile gamble at a position that requires you to do just that.

Tight end is a train wreck as usual, but right now I actually feel pretty good about submitting Noah Fant's name. He's averaged 5 catches on 8 targets the last two weeks, and while his receptions haven't amounted to much, he's at least giving you bites at the apple.

Also considered: Evan Engram, whose targets are on the rise.

You sort of hate to pay up for defenses, but if you were going to pay up in any given week, you'd consider doing it against the Cowboys, right? The Cowboys managed just 3 points against the Washington defense, so what are they supposed to do against the Steelers? Pittsburgh leads the league in sacks and is tied for 3rd in the league in interceptions. Their big play ability is unmatched, and their consistency is excellent as well. This is going to be a tough fade if we wind up going cheap.

If you don't pay up at defense, I think these two plays are basically interchangeable. Both are cheap, mediocre defenses in great match-ups against mediocre offenses. I'd probably lean into the Falcons here just because I don't believe in Denver's offense whatsoever. Either way, you aren't grabbing a cheap defense for upside this week. Still, on a week with very few great punts, this is likely a week where you won't have a lot of disposable income to spend on defenses.