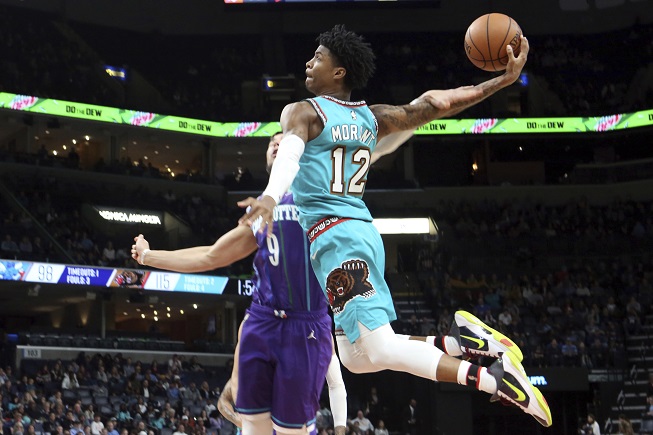 Don't look now, but one of the league's most exciting young players might just be making a leap. Morant has shot 24 times a game over his first two this season - a 10 shot jump over last year's average - while being even more efficient from the field. He's played 4 more minutes per game, which looks to be his rotation in close games going forward. Now this Brooklyn game rates to be his toughest test yet in terms of Memphis' ability to stay in the game, but nobody will accuse Kyrie and Dinwiddie of being a strong defensive backcourt. Morant is going to settle in as a player who's 10% more expensive in short order, and I'm a buyer on these prices.

Isn't this kind of a steal for what we got used to expecting from Murray during the bubble last season? I get that it's been a rocky start so far, but if there's one thing we've learned from 7 years in this business it's this: we want to be buyers when a guy's price drops due to a bad shooting percentage. Murray went 1-9 in his debut, which has sandbagged his entire DFS season. He still got 20 shots in the air against the Clippers, and the 37 minutes he played mean the Nuggets aren't concerned about his calf. If he merely returns to last season's form, he's a terrific play against a banged-up Rockets team that has trouble with speedy point guards.

Also considered: Killian Hayes? Playing in the NBA has looked hard for the Pistons' rookie so far, but Derrick Rose sitting opens up a lot of ball-handling duties.

Harden With John Wall still in his mandated quarantine, Harden will continue to work his way back into shape against the Nuggets on Monday. It's not like the few extra pounds really hurt his ability to play basketball, very well, for a long period of time - Harden finished the Rockets' overtime loss to the Blazers with 44 points and 17 assists in 43 minutes on the court. Playing in Denver is far from ideal, but on a shorter slate grabbing Harden as your pay-up option when there should almost certainly be a lot of value is a great place to start.

While FanDuel was sleeping, Brooks has been playing 30 minutes a game at a fantasy point per minute clip to start the season. The price is just flat out wrong, and this Brooklyn match-up isn't going to scare me off. Brooks is a guy Memphis has liked for a while (holding him out of a few potential trade deals), and his performance in the starting line-up so far should have his role looking fairly secure going forward. This is a price and opportunity mismatch, and a great value play in any format.

Wright played 42 minutes in the Pistons' double-overtime loss to Cleveland, and even 32 minutes in regulation should be plenty for him to pay prices like these against a bad Atlanta defense. The icing on the cake is Derrick Rose's absence, which leaves the Pistons with precious few ball-handlers. Wright is a nice high floor option that helps you pay up elsewhere.

Did Slo-Mo just lead the Grizzlies in minutes and rebounds in an NBA game? I believe that he did. Anderson played 36 minutes in regulation and was solid on both ends against the Hawks, and it stands to reason that we're looking at a 28-minute floor with a 36-minute ceiling right now. While I don't think we can count on Anderson for the level of scoring he displayed in the Hawks game, the fact that he has hit double-digit rebounds in both games so far leads me to believe that the way the Grizz are using him should yield more high rebound games in the future. I like him as a cheap option on this small slate.

For a small slate, there really is an abundance of value tonight. Derrick Jones was totally serviceable out of the stating lineup against Houston, and Melo's absence should only cement his role further. Jackson has been good off the bench for the Pistons so far, and with Blake Griffin already ruled out, could see high 20s minutes again. Jones is the safer of the two (assuming he starts and Jackson doesn't), but Jackson's 19 points in 28 minutes against the Wolves speaks to his upside.

Keep an eye on both Kevin Durant and LeBron James. There is some speculation that both of these guys could sit on the second half of a back to back, which would open up huge usage and opportunity for their respective teams.

As predicted, Wood picked up right where he left off in February and March, immediately showing that his lofty contract was likely worth it. He shot a fantastic 14-20 from two in his Rockets debut against the Blazers, and while he got some extra run in the overtime, it's very promising that his default rotation was 38 minutes in regulation. He also brought his much-needed size to bear for 13 rebounds as well. The Rockets will absolutely need his size against Jokic and company, and Wood can be considered a great cash game play once again.

Early speculation is that LeBron will sit this half of the back to back, and Anthony Davis will get to play the leading man with Bron benched. If it plays out that way, Davis should be the anchor of all your cash game lineups. If Davis were to sit again, Kyle Kuzma will immediately become a cash game staple in his stead. Monitor this situation carefully, as the rest of your lineup sort of depends on it.

We're also keeping an eye on the Detroit Pistons. With Blake Griffin ruled out, it's going to open up a lot of minutes and usage alike. Sekou Doumbouya would be a great cash game play if he found himself in the starting lineup.

Another guy I'm considering is Darius Bazley, but man, it's tough to trust him after just one game. Power forward is honestly really tough tonight, so at this point we're basically just hoping for value to appear.

The system has already been interested in Plumlee in his new role with the Pistons, and he's been rock solid so far. With 30+ FanDuel points on 32 minutes exactly in each of his first two games, he's a clear cut $6k player. With Griffin out of the lineup AND a world-class match-up with the Hawks, who allowed the most points per game to opposing centers last season, Plumlee is a fantastic cash game option here.

Have you ever Nurked in cash? I have, and it's delightful. We saw Nurkic unleashed for his full rotation in the Houston game, and he supplied 12/11/6 in (importantly) a 34 minute rotation. If he's healthy enough for 34 minutes of run, I'd expect him to be out there for all of it against this long Lakers squad. While I think I'd prefer Plumlee, Nurkic is a fine consolation prize.