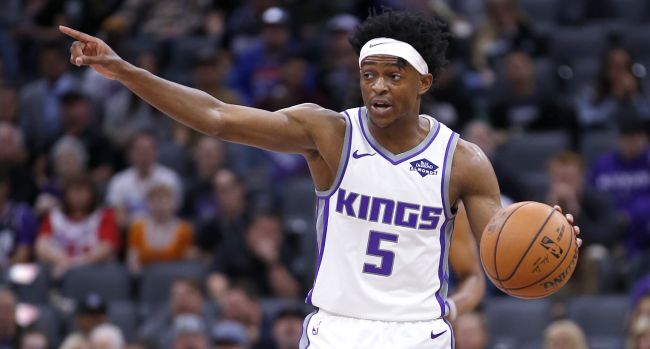 It's been a week since my last article, and I'm ready for a big second half! We had a ton of craziness in the first half, and it appears there's no let-up when you look at all the news on this slate. We have a million guys questionable, and players already ruled out because of COVID protocols. It's also frustrating that so many teams haven't dropped much injury news after a long break but be sure to watch out for all the news that will surely drop during the day today!

Head on over for your chance to get DFSR PRO, which will give you access to our NBA FanDuel and DraftKings optimizer, our NFL Optimizer, and NHL Projections as well. Plus, our new player lab! Get started for free by clicking the button below.

Fox is a regular in these articles, and if you look at his recent form, it appears we're doing something right. Amazingly, Fox has at least 28 DraftKings points in 22-straight games, averaging 44.4 fantasy points per game in that span. That's a crazy total from a guy who's growing by the day, and it's scary to think that he's been doing this damage with the Kings struggling mightily. What we love about him here is this matchup, facing a Houston club in the midst of a 12-game losing streak. A big reason for that is their 21st-ranked defense, owning a 22nd OPRK against opposing PGs as well. That's also clear when you see that Fox has over 87 combined fantasy points in his two meetings with the Rockets this year.

Payton can be a frustrating guy to own in season-long formats, but we're talking about DFS here. That means we only need him to be successful for this one slate, which seems like a strong possibility when you look at all the variables. The biggest aspect is the fact that Derrick Rose is expected to miss this game. That means Payton will start and play his usual 30 minutes at point guard. He did just that in the last game before the break, collecting 43 DK points in one of the best games of the season. That's a crazy total from a player sitting around $5K on both sites, and this guy has proven that he can be a $7K player in the past, even earlier on this year. Milwaukee isn't as bad of a matchup as it sounds either, with the Bucks sitting fifth in pace and 19th in points allowed. In their one meeting earlier this year, Elf had 27 points, three rebounds, and seven assists.

These price tags are insulting. PG13 has played at a $9K level on both sites all year, and it's hard to understand why he's so cheap. We're talking about a guy who's averaging 43 fantasy points per game for the year. That's right on par with our projection, and it's crazy to see a dude with 60-point potential priced so reasonably. The reason we think he can reach 50-60 is this matchup, with the Warriors ranked second in pace and 22nd in points allowed. That's a godsend for a beast like PG, which is no surprise when you see his 43-point average in two matchups with Golden State this season. If he reached 43 fantasy points at $8K, you're already way ahead of the pack with how weak the shooting guard position is.

This is the definition of a GPP play, but Maxey could be awesome with so many Sixers missing. They're expected to be without Joel Embiid and Ben Simmons, which is honestly more than 50 percent of the team's offense. Maxey averaged 27.8 DK points per game across 29.1 minutes in the stretch without those guys earlier in the season. That seven-game stretch is hard to overlook, and we have to believe he'll get at least 20-25 minutes with his play-making being needed here. It's obviously risky, but he's hovering around $3K on both sites, and that limits a major part of his risk. If you get the 28 fantasy points we saw earlier in the season, you'd be looking at 9X value, which is unprecedented in DFS and an automatic lock. Chicago is a great matchup, too, and we'll discuss that more later on.

With so many Raptors still out, don't forget about Terence Davis!

Hayward has taken a small step back with LaMelo Ball and Terry Rozier both breaking out, but he's been way too good to see his price drop this much. In fact, the former Butler star is averaging 38 fantasy points per game for the season, which means he's already $1,000 too cheap. He showed why he's been such a stud in his final game before the break, dropping 55 fantasy points in one of his best games of the season. He did that with Rozier and Ball both in the lineup, proving that his season average is no fluke. We really love this matchup, though, with Detroit surrendering the second-most fantasy points to opposing SFs this season.

Green is another guy who should see his role skyrocket with Embiid and Simmons both out of the lineup. Much like Maxey, he was one of the focal points of the offense when they were out early on. Between January 2 and 20, Green averaged 26.3 DK points per game in over 30 minutes a night. That's pretty much the same stretch that we talked about with Maxey earlier, and he even provided a 56-point gem in the midst of that stretch. While he likely won't duplicate that, we can't overlook that sort of potential with so much usage out of the lineup. We foreshadowed how good a matchup Chicago is earlier on, with the Bulls ranked sixth in pace and 25th in total defense. As long as Green gets the 30-plus minutes and double-digit shots we anticipate, he's a good value in the $4K-range.

Nicolas Batum could return to action here, and it is a bit too cheap, around $4,000 on both sites.

This is the most important part of this Sixers stack. With Embiid and Simmons both out, Harris is going to be the focal point of the offense. We actually anticipate him getting a minimum of 40 minutes and 20 shots which is scary since he has a 30 percent usage rate with those two guys off the floor. That's why we have this lofty 46-point projection on both sites, making him the best per-dollar play on the board. The $6,900 price tag on FanDuel is especially egregious, and he should be in 100 percent of lineups over there. We already discussed how good a matchup Chicago is, which is also on display when you see that they surrender the fifth-most fantasy points to opposing power forwards as well.

Toronto is another extremely shorthanded team, and it should force Boucher into a bigger role. While we'd like to see him start and play 40 minutes, we're still satisfied with 30 minutes off the bench. This team is currently without Pascal Siakam, Fred VanVleet, and OG Anunoby, leaving Boucher to feast. In the last game without those three before the break, Boucher had a career-high 30 points. That marked his fourth-straight game with at least 28 DraftKings points, giving him a 31-point average over his last 15 games played. That's all you can ask for from a $6,500 player, and it's scary to think how good he could be if he gets the start and 40 minutes fans have been praying for. Atlanta is a stupendous matchup, too, with the Hawks ranked 24th in defensive efficiency.

Al-Farouq Aminu's minutes have been creeping up, and he's a nice punt play around a minimum price on both sites.

Now that Blake Griffin and Jahlil Okafor are both out of the picture, Plumlee is feasting as the starting center in Detroit. What's really added to his value is the fact that he's taking on a play-making role, averaging 12.2 points, 9.9 rebounds, 5.6 assists, and 1.4 blocks over his last 12 games played. That's allowed him to score at least 28 fantasy points in 10 of those en route to a 36-point average. Those are absurd numbers from a guy barely cracking $6K, and it's hard to understand why these sites are keeping his price so affordable. The matchup against Charlotte is the stuffing in the donut, though, with Charlotte ranked 23rd in total defense while surrendering the seventh-most fantasy points to opposing centers.

Dwight is the final piece of our Sixers stack, and he's likely going to receive a start at center in the absence of Embiid. In his four starts this season, Howard is averaging 23 DK points per game 24 minutes a night. That per-minute production is right on par with what we expect from Dwight, averaging 18.3 DK points per game in 15.8 minutes a night. That equates to nearly 1.3 DK points per minute, a monster average from someone who should be seeing a minutes increase here. We love the matchup against the fast-paced Bulls, too, with Chicago owning a 21st OPRK against opposing centers this season. The $3,800 price on FanDuel is another silly price, and he should be universally owned over there as well.

Nerlens Noel has been flirting with 40 minutes a night recently and remains too cheap below $4K.