The week we have all been waiting for is finally here. Making it even better this time around is the fact this is the second trip to Augusta National in the last five months but unlike November, there will be patrons to cheer on this elite field. Every one of the Top 50 players in the World is teeing up this week with the news that Brooks Koepka is going to give it a try after dealing with an injury.

As it should be, Augusta National Golf Club is annually one of the toughest tests on Tour ranking 11th, 16th, 7th, 2nd, and 3rd hardest over the last five years. It's a long Par 72 setup that stretches out over 7,400 yards. The fairways may be wide and see above-average driving accuracy in relation to other events but the real challenge comes on the approach to these very undulated and fast greens with natural run-offs that can really get you into trouble. Not only do you need to be on point with your irons to have a shot at birdie opportunities but you also need to have a strong scrambling/around the green game as to not hemorrhage strokes to the field.

Let's now take a look at the scorecard, previous winners, breakdown of the key stats, and then get into the core plays. 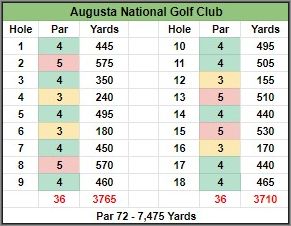 Looking at the proximity in the mid-ranges(125-150 & 150-175 yards) for the longer hitters and long iron proximity(175-200 and 200+ yards) for the shorter hitters. With larger fairways and a higher driver accuracy % this week, I will also be looking at fairway proximity. On Fantasy National, this also ties in with their opportunities gained stat.

Strokes Gained: Around the Green/Scrambling

As I mentioned above, this will be very important this week with the very difficult green complexes. You can also throw in sand save % here, as well.

Looking at the last five years, there have been 57 players who finish Top 10 here at the Masters and only eight of those players finished outside the Top 20 in Par 4 scoring for the week and the winner has ranked 7th, 1st, 1st, 1st, 2nd in those years. par 5 scoring is also important as they are the easiest holes on the course but the Par 4's are where I feel players can really separate themselves from the field.

Like SG: Approach, this stat is in my model each and every week as it correlates very highly with fantasy scoring. This stat also says "or better" which includes Eagles and we have seen 689 of these over the last two years with the majority of them coming on Hole #13 and #15.

With all that said, let's take a look at a few of my core plays in each price range.

Let's start by discussing the elephant in the room that is sitting in the corner eating all the chalk. That's right, if you thought Spieth was going to be high-owned before, buckle up as he that ownership is definitely trending up after a big win last week at the Valero Texas Open. It's not even just last week for me as he has been playing great in 2021 with a win and four Top 5 finishes in his last six events. While his Masters form hasn't been great over the last two years(T46, T21), he does return to the site of his first Major Championship where he claimed the Green Jacket back in 2015. Not only that, but he has also finished Top 3 four times in seven trips and never missed the cut. Even with the massive chalk this week, I will have exposure to Spieth in all formats and be looking to bet him in head-to-head matchups.

Here is a piece of what I wrote about JT back at the Masters in November:

He is #1 in my main model on the sheet and that is with average course history. While he has yet to post a Top 10 here at Augusta, he has improved each trip(T39, T22, T17, T12) and comes in with some excellent form.

While he didn't win, he improved on his performance once again and finished T4 and was one of only four players to score 100+ DraftKings points. he is #1 in my model once again and like Spieth, is also coming off a win as he won The PLAYERS a few weeks ago. Looking at the most recent stats trends, JT has gained a whopping 16 strokes on approach in his last two events and only lost strokes once in his last 17 events dating back to June 2020. I am not sure how ownership will shake out up top this week but either way, JT is core piece in my player pool.

I am going with a third top tier option this week for the article and it comes down to getting Webb Simpson at just $9K this week. That is $300 cheaper than he was back at the Masters in November when he finished T10 and if you are worried about his missed cut at the PLAYERS, he also came into the 2019 Masters with a MC and ended up T5. The other reason it doesn't concern me is the form was terrific before as he tallied four Top 10's and seven Top 25 finishes so far this season in 10 events. I also mentioned around the green and putting being very important this week and looking at the sheet Webb is 5th in SG: Around the Green and 8th in SG: Putting(10th on Poa). FIre up Webb in all formats.

Believe it or not, this is already Cameron Smith's 6th trip to Augusta and as you will read and hear all week, experience is a big advantage. We have to start with that course history as he finished runner-up back in November and now has Top 5's in two of his last three Masters. More good news as he comes into this week with some solid form as he has made 10 of 11 cuts on the season with three Top 5's and eight Top 25 finishes including three straight. On top of that, he has gained strokes on approach in three straight and looking at the sheet, he is 13th in this field in SG: Around the Green and 12th in SG: Putting. At these prices, I will have plenty of exposure to Cam Smith in all formats and will also be betting him outright.

Speaking of golfers who check every box for The Masters, may I present to you my case for Paul Casey. While lacking success in his last two trips to Augusta(T38, MC), he has tons of experience and tallied four straight Top 15's from 2015-2018(T15, T6, T4, T6) and comes in with terrific form, as well. Since the calendar turned to 2021, Casey has tallied four straight Top 10 finishes in some strong fields(AMEX, Pebble Beach, API, PLAYERS) and has gained 17.3 strokes on approach and 9.9 around the green in that time. Add it all up and you get a player who is massively underpriced and should be in your player pool!

While Ancer doesn't have near the experience as the players mentioned above, he looked terrific here in first trip back in November finishing T13. One thing he does have in common with the players above is the form coming into the week as he has finished Top 25 in three straight and seven of his last nine events going back to the Masters in November and has gained strokes on approach in every one of those events.

I have been on the Canadian for most of the season on the back of his ball-striking so seeing him under $7K on DraftKings this week has me very excited. First of all, he comes in hot with three straight Top 15 finishes and has tallied a Top 25 in nine of his last 10 stroke-play events. Looking at the stats over the last 24 rounds(via FNGC), he is #1 in SG: Ball Striking, 15th in Par 4 scoring, 4th in Par 5 scoring, and 8th in opportunities gained. Finally, he returns to Augusta with some trending course history as he finished T46 in his first trip in 2019 and followed that up with a T10 back in November. Cire up the Canadian in all formats.