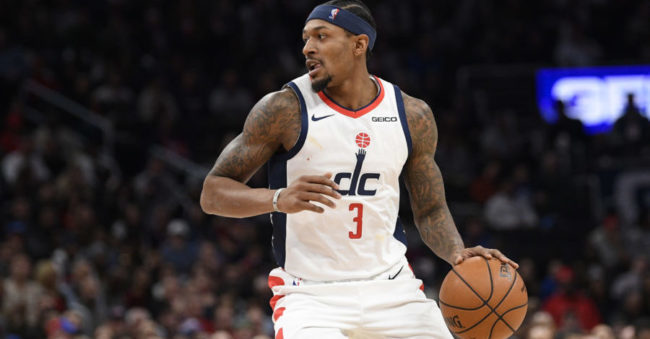 Some wacky things are going on in the NBA right now. As someone who covers basketball for a living, players are suiting up every night that I've never heard of. That's just how bizarre things are right now, and it's likely to continue with so many teams falling out of it. It's all about adapting at this point of the season, though, and you'll see what I mean with some of the names you'll see in here. With that in mind, let's kick things off with someone that everyone knows.

If the Warriors had a better record, Curry would be firmly in the MVP discussion. He's currently averaging 29.7 points, 5.5 rebounds, 6.0 assists, and 1.3 steals per game. That's led to a 49-point average for the season on DraftKings, and he's been even better since his return from injury. In fact, Chef Curry has at least 50 fantasy points in all four games since his return, en route to a 54-point average. All of that makes him good against anyone, but Washington happens to be the most fantasy-friendly opponent in the NBA. They currently rank 26th in defensive efficiency and 30th in points allowed while playing at the fastest pace in the league.

I have a feeling that Scary Terry is going to live in this article for the next month. We say that because Charlotte's backcourt is a shell of itself, missing Gordon Hayward, LaMelo Ball, and Malik Monk. That's three of the primary scorers on this roster, and it's going to leave Rozier with primary ball-handling duties and an opportunity to take 20-25 shots a game. That's awesome for a dude in the midst of a breakout season, with Scary Terry averaging 35 fantasy points per game. We honestly don't expect Milwaukee to slow him down either, with the Bucks ranked 19th in points allowed while playing at the third-fastest pace in the NBA.

If Jamal Murray is out, Facundo Campazzo could get a rare start. If Monte Morris is out as well, Facu is a lock.

We mentioned in the Curry write-up how Washington plays at the fastest pace in the NBA, but Golden State is currently in second. That means this will easily be the highest-scoring game of the night, with 130 points being needed for a victory. That's huge news for the leading scorer in the NBA, with Beal providing 47.2 DK points per game. A recent injury lowered his price to $8,300 on FanDuel, and that's laughable for such a talented player in such a premium matchup. Playing 30 minutes and taking 19 shots in his return to action means he should be ready for a full workload here, and that's bad news for this 23rd-ranked Warriors defense.

Mills isn't going to be the highest-scoring player in your lineup, but he's one of the best bets out there to reach 5X value. We say that because he's been doing that regularly, averaging 21 DraftKings points per game for the season. That might not sound like much, but it equates to 5X value on DraftKings and 6X on FanDuel. That's really all you can ask for from such a cheap player, and we love that he's been playing 28 minutes a night over his last 12 outings. This sharpshooter can drop a 30-spot pretty easily in that amount of playing time, especially against a 14th-ranked Nuggets defense. He actually had 29 fantasy points in their first meeting this season, and if he can duplicate that, you've found one of the best per-dollar plays on the board.

Eric Bledsoe has been great recently with all of the injuries in New Orleans and should continue to play big minutes.

This is going to be the game to stack! We already mentioned how this matchup should be the highest-scoring game of the night between the two fastest teams, making an athlete like Oubre an elite option. He's been much better since the opening two months, too, averaging 32 fantasy points per game since the beginning of February. That's a great total from a player hovering around $6K, and you have to believe a guy like this is going to be extra motivated against his former team. Not to mention, the Wizards surrender the fourth-most fantasy points to opposing small forwards as well.

The Pacers roster is in shambles right now. You'd think they had a COVID breakout if you saw the lineup on Wednesday, but the injury bug has taken over. They're currently missing Domantas Sabonis, Myles Turner, and Malcolm Brogdon. Missing three guys doesn't sound that bad, but those happen to be the three primary fantasy producers on this club. That means Holiday is one of the only starters standing, leaving him to play huge minutes. In the first game without those guys, Holiday dropped 33 fantasy points in 29 minutes. Those 29 minutes are actually well below his season average, and we anticipate it being closer to 40 here.

Khris Middleton could be a beast if Giannis Antetokounmpo is out again.

Portis has quietly been an excellent fantasy producer throughout his career, and it's always just been a matter of playing time. With Giannis Antetokounmpo out of the lineup, Portis has been starting and playing big minutes. On Thursday, he provided 20 points and 14 rebounds across 34 minutes of play. That followed up a 13-point, 13-rebound gem in the prior outing, showing how dominant he can be with Giannis out. That makes it hard to believe that he's sitting below $6K on both sites, and we haven't even discussed this matchup. Charlotte currently surrenders the most fantasy points in the NBA to opposing PFs, according to DraftKings.

I knew very little about this guy before Wednesday, but he certainly opened up my eyes. In that career game, McDaniels dropped 38.5 DK points across 32 minutes of action. It's unclear if that's the outlier, but one has to believe he's going to play more with Hayward, Ball, and Rozier all sidelined. That makes the $3,300 price tag laughable, which is 11X value on DK in that Wednesday gem. We already discussed how good of a matchup Milwaukee is, and it's nice that he won't have to deal with Giannis either. It also allows you to fit some studs into your lineup, and we've got the best one on the board coming up next.

If you want to stack Warriors against the Wizards, you can't overlook Draymond Green with his triple-double capabilities.

You guys might be sick of seeing Jokic in here, but the simple fact is, this dude always produces! He's currently leading the NBA with 59 DK points per game, scoring at least 40 fantasy points in all but two games this year. A 40-point floor is truly obscene, and it's even more bizarre when you see that Joker is hanging around just $10K. That means there are three guys above him in pricing on DK and even more on FanDuel. If you can explain that, I'd love to know what's going on? He's killed the Spurs in their two meetings this season too, averaging 30 points, 9.5 rebounds, and 7.5 assists per game.

What a name this guy has! I'm not even sure how to pronounce this last name, but I've always been a fan of his game. The issue was that he was stuck behind Sabonis and Turner in the rotation, but with those guys out, Goga is the primary rebounder and center. In a start on Wednesday, Goga dropped 30 fantasy points across 25 minutes of action. That's pretty much the guy we've seen all season, with Bitadze averaging 12 DK points per game in just 10.3 minutes a night. If he keeps up that rate and gets to 30 minutes, we could be looking at 35-40 fantasy points! If you get that at these dirt-cheap price tags, you've found another incredible value. We love the matchup against Orlando, too, with the Magic trading away their whole roster at the trade deadline and sending out a G-League lineup.

If Clint Capela is out, don't forget about Onyeka Okongwu.