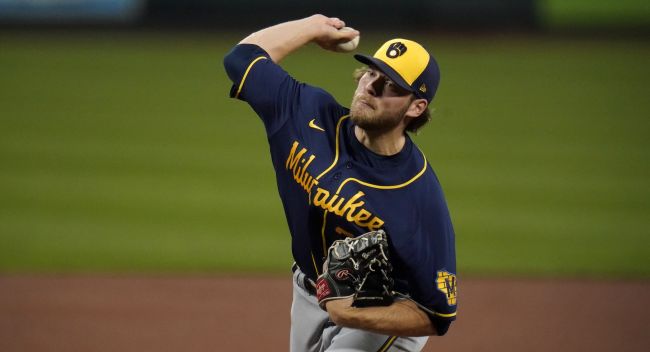 Happy Hump Day baseball fans. Buckle up as we have another full day of baseball on tap and I got you covered with my top plays at each position for both slates. Let's get started.

The decision at pitcher is fairly easy on the early slate as Corbin Burnes checks almost every single box. He is finally getting a chance to be a full-time starter and showing management it was the right decision as he has been elite allowing just two hits, striking out 20 and walking zero through two starts, and has an insane 18% swinging-strike rate to go with it. He now faces a Cubs team that ranks dead last in runs scored(29), wOBA(.264), and wRC+(66) to start the season with an ugly 29% K rate. Lock Burnes into your player pool in all formats.

On the main slate, I love the PTS/$ value with Charlie Morton who is a -200 favorite tonight. It has been a good start to his career as Brave as he comes into tonight with a 3.27 ERA and even better 2.85 xFIP and posted a 12:3 strikeout to walk ratio. He also faces a Marlins team, who before their breakout last night, were tied with the Cubs for last in runs scored(29) and bottom 10 in almost all other offensive categories. Morton is in play for me in all formats tonight.

Also Consider: Dustin May(LAD) who was lights out in his first start and is the biggest favorite(-275) on the slate

It was close between Walsh and Vladdy for the top spot on the early slate but Walsh gets the nod with the big discount on FanDuel. Even with Rendon in the lineup, he has hit 5th or higher in the order in all nine of his starts with hits in seven of those, four being multi-hit efforts. He has also taken advantage of the excellent hitters in front of him by driving in nine and now faces a pitcher in Brad Keller who has given up 15 hits, five walks, and 10 earned runs over his first 4.2 innings(two starts). In play in all formats.

Also Consider: Vladimir Guerrero(TOR) who has started the year red-hot with hits in 10 of 11 games with four multi-hit efforts in his last six games

In a DraftKings era where everyone and their mother is $5K, I am thrilled to get Hoskins in the $4k range. Going into Tuesday, he had tallied a hit in seven of his first nine games with eight extra-base hits and has benefited from hitting in the two-hole with seven runs scored. What stands out the most is always the splits vs. lefties as both of his home runs this season have come in the split and he has tallied an insane .438 wOBA, 174 wRC+, and .326 ISO vs. southpaws since the start of the 2019 season. Lock and load in all formats.

There are a lot of moving parts on the early slate. If you have the salary the clear #1 is DJ LeMahieu who is a tier or even two ahead of the other options in a great hitting park as a favorite. A case can be made for Keston Hiura on FanDuel in the mid $2K range.  Despite his rough start to the season, he has the talent to crush that price tag. If you are rolling with the Angels today, it will also be hard to avoid David Fletcher who hits leadoff but like Hiura, has gotten off to a terrible start to the season.

If not for the slower start, I would say Albies is another player who is surprisingly under $5k on DraftKings despite his opportunity at the top of the Braves lineup. The positive is that he does have hits in five of his last six games and is under $3K on FanDuel making him a top PTS/$ in the system and in play in all formats.

I know there are some big names at shortstop(Turner & Bogaerts to name a few) but getting Bichette as the fifth most expensive shortstop on a small slate feels like a steal. His performance warrants a top price as he comes into tonight with a 10 game hitting streak hitting near the top of the Jays lineup and now faces a past-his-prime Corey Kluber who has given up 10 hits, five walks, and four earned runs over his first two starts(6.1 innings).

This is more of a one-off value play at this point as we don't know who is taking the mound for the Rays tonight. It hasn't been the breakout start some had expected but he is getting very important at-bats as the leadoff hitter. The biggest issue is the lack of patience at the plate(2.3% BB rate) but for fantasy, he has made up for it with some sneaky power with two home runs. Most of all, he gives us some salary relief allowing us to load up on some big bats.

I keep coming back to the Jays here after they have let me down multiple times this season but it comes down to value and opportunity. Biggio is off to slow start but that has helped keep his price down and the good news is that he is coming off his first multi-hit game of the season so hopefully he can build off that in this plus matchup.

Also Consider: Gio Urshela(NYY) on the other side of this 10.5 total game coming at a value price much like Biggio

The theme of this entire article has been targeting players under $5k on DraftKings to help build a more balanced lineup if wanting to pay up for pitching which is almost always preferred by our system. Kyle Seager is another name on that list and he has been a key part of the Mariners balanced offensive attack as one of five players with multiple home runs early in the season. He and the M's get a plus matchup tonight against Matt Harvey who is with his fourth team in four seasons and still struggling having given up 13 hits and six earned runs through two starts. Seager is my top play at third on the main slate.

The run of sub $5K plays on DraftKings has come to an end but this play is much more about FanDuel today where he is still below $3K and a top PTS/$ play. The Cards are having trouble getting runs in early this season but it is no fault of Edmans who has reached base safely in all 11 games with hits in 10 of them. He has some big bats behind him that are going to heat up and they all get a plus matchup today.

The Rays sit Top 5 in implied runs on the main slate and get a plus matchup vs. a rookie pitcher who is having trouble missing bats with just two strikeouts and a 4% whiff rate through two starts. Meadows and Arozarena hit 1-2 in the lineup and provide a combination of consistency leading to a high floor as well as high ceilings which can lead to GPP takedowns. Arozarena is probably best suited for GPP at his current price but Meadows is coming much cheaer on both sites and in play in all formats.