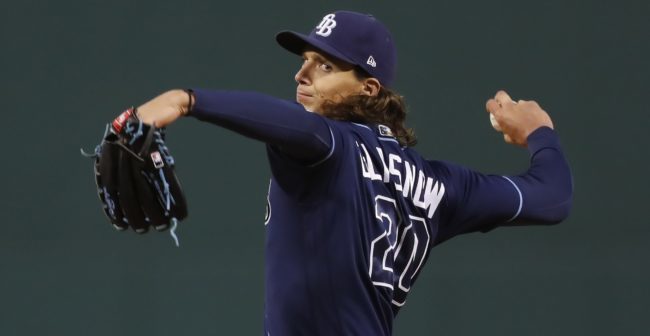 Happy Friday baseball fans. We have one early game today(MIL@CHC) but will be concentrating on the huge 14-game main slate with my top plays at each position for FanDuel and Draftkings. Let's get started.

I would love to just throw up deGrom here as my top pitcher, which he is in terms of raw points, but for cash games it very tough to build around him tonight. For this reason, I lean Glasnow tonight who may not be on the exact same level as deGrom but the gap is very, very small. Through four starts, Glasnow has allowed just nine hits and two earned runs with an insane 40% K rate which is aided by a new slider that he is throwing that is creating a 15% swinging-strike rate. The Jays do have some firepower but have underwhelmed lately with a 70 wRC+ over the last seven days and 89 on the season(11% below league average). Glasnow is my top pitcher to build around tonight in all formats.

If you rostered him in his last start, it is going to be hard to get that taste out of your mouth but hear me out. He was excellent in his two previous starts allowing just five hits and one earned run over 11 innings while striking out 15 and walking just two. Even with that loss last game, the underlying stats are near-elite as the xFIP(2.45) is a run and a half lower than his ERA while the WHIP sits at 1.00. That in itself presents a nice floor as he will normally be going 5-6 innings and he also has big upside striking out 32% of batters with a crazy 14% swinging-strike rate. He will need that on Friday as the D-Backs come in hot scoring 5+ runs in four straight but overall they are producing runs 17% below average vs. righties with a 25% K rate. That combined with his price has Ynoa as my top value SP2 on DraftKings.

There are a lot of great plays in the upper tier of salary but there are few as hot as Matt Olson right now. He comes into Friday night's game with hits in seven straight and nine of his last 10 games with four multi-hit efforts, two doubles, and six home runs for an average of 19.5 FD/14.4 DK points per game. He and the A's now get an elite matchup vs. Jorge Lopez who has given up 13 earned runs(5 HR) through his first three starts and has given up a .394 wOBA/.574 SLG to lefties since the start of the 2019 season. Fire up Olson in all formats!

I don't normally write up catchers in my article but Nunez jump off the page for a couple of reasons starting with the price. While he comes with an insane Coors Field boost on FanDuel where you don't even have to roster a catcher, he comes under $4K on DraftKings??? On top of the price, he has been productive this season with a .397 wOBA and 136 wRC+ with four home runs, all coming at home in Coors. To top it off he and the Rockies get a great matchup vs. Vince Velazquez who has struggled with command out of the bullpen(3 appearances) and is now getting a start. Dom is my top catcher on DraftKings tonight.

I won't tell you that Kike is off to a hot start with his new team(.250/.284/.434 slash line) but I will tell you is that the price meets the opportunity which puts him near the top of the PTS/$ ranking in the projections. That opportunity comes in the form of being the leadoff hitter on leagues leading offense and the better news is that Kike is heating up with hits in seven of his last nine games with six extra-base hits. The Red Sox get a plus matchup vs. Kikuchi and at these prices, Hernandez is in play in all formats.

Also Consider: Jed Lowrie(OAK) who is off to a hot start and is hitting near the top of the lineup for the A's

While I am almost for sure fading that giant price tag on DraftKings, at least in cash, I am finding it hard to ignore the price on FanDuel. Xander has not only been one of the best shortstops in the game but one of the best players overall to start the year with an insane .385/.429/.585 slash line and 181 wRC+. He faces a struggling lefty in Kikuchi and has owned southpaw pitching to the tune of a .393 wOBA and 145 wRC+ since the start of last year. Top shortstop in all formats on FanDuel tonight.

For value, especially on FanDuel, I will be looking towards a somewhat under the radar Miguel Rojas who is having a great start to the year and is now getting hacks at the top of the lineup. We shouldn't be too surprised as he broke out with a .304/.392/.496 slash line over 143 at-bats in the shortened 2020 season. What stands out the most early on is the patience at the plate as he has cut his career K rate in half(6%), although a small sample size. If he sticks at the top of the order(1st or 2nd in four straight) the price will most definitely be going up making this a bit of a buy-low opportunity in a good spot.

As you are well aware if you read our articles or use the projections, that the system absolutely loves Alex Bregman and I absolutely agree. Seeing as we have seen him as high as $5,800 on DraftKings early in the season when he was scorching hot, this feels like a huge buy-low opportunity in a good spot. He went hitless on Tuesday in his return from COVID protocols but has since picked up five hits in his last six at-bats and has been great against lefty pitching. Bregman is easily my top play at third base tonight.

While I prefer Bregman on FanDuel for just $100 more, France becomes an excellent pivot on DraftKings at a much bigger discount. France has been a huge part of the AL West-leading Mariners offense as he is hitting 2nd in the lineup and comes into tonight with a very impressive .303/.405/.515 slash line with three long balls and scored 13 and driven in 12. He and the red-hot M's now get a plus matchup against Martin Perez who comes in with an ugly 5.93 ERA/5.58 xFIP. Lock and load in all formats.

With a win over Boston last night, the Mariners pull into a tie with Oakland for the best record in the American League. The early success has come from a lights-out bullpen and very balanced offensive attack which is led by Haniger who hits leadoff in front of Ty France who I mentioned above at third. Like France, Haniger has been very consistent to start the year with a .316/.349/.605 slash line and already has five long balls and 17 RBI from the leadoff spot. France and Haniger are one of my favorite two-man stacks for cash games tonight and I will also have exposure to some full Mariners stacks vs. Martin Perez.

This is fully expected to be a rebuild season for the Pirates but, for fantasy, they have been a great source of PTS/$ value. Reynolds is one of the values and has been one of the hottest hitters over the past week with hits in five of his last six games with three extra-base hits and nine runs scored. On top of that, he has been money against left-handed pitching and faces an average-at-best J.A. Happ who is running an xFIP(5.25) that is over two runs higher than his ERA(3.12). Fire up Reynolds as a one-off value in the outfield or as a part of a small or larger top-of-the-order team stack.