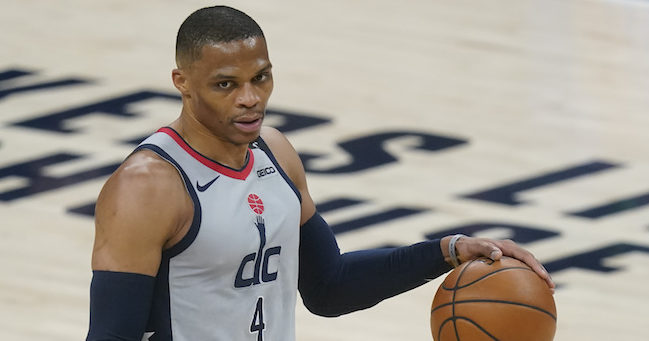 It’s a shorter two-game play-in slate here and it’s going to be tough to fade Russell Westbrook even at these higher prices. He’s coming in at some of the biggest salary numbers you’ve seen, but it is completely warranted. He’s a near-lock to play 40+ minutes in this game and even with Bradley Beal back the last couple of games, he put up an average of 22 points, 14 assists, and 14 rebounds. The stat accumulation is nearly unmatched and it's lead to the crazy prices, but the floor is so damn high in this game.

The bad news first: Kemba hasn’t played in more than a week, sitting out the last few games of the Celtics’ season. That does give me some pause around what his minute's floor looks like in this game. But before he went down the minute's leash was lifted and he played 35, 40, and 38 minutes in his final three games. He dropped more than 30 points in two of those games. Keep an ear out for whether the Celts have a minutes cap on him. And I’ll also say, I like this play a lot less if Jaylen Brown actually makes a return to the fold.

Like Kemba Walker, I’m a little concerned about the Celtics plan with Marcus Smart here. He also hasn’t played in a week, but it does look a lot like injury management and he’s not on the report leading into this game. That leads me to think he’s a full-go in this game. If that’s the case then he does represent one of the better ways to save in the middle tier which isn’t always that easy in these smaller playoff slates. And hopefully, the minutes are going to win out here.

Rozier is good for a lot of minutes for the Hornets in this game and is coming off a very good season. He played 37 minutes in the last game and took the second-most shots on the team with 19. That’s been a theme for him a lot of the year. He’s played 37 or more minutes in four of the last five games and though struggle from beyond the arc in three of them which dipped down some of the scoring numbers. But let’s look for a little regression here and hope the shot volume sticks up there.

Even with Domantas Sabonis back, the Pacers still had a lot of reason to play Brissett a ton in their final game of the year. He played the third-most minutes on the team with 36 and finished with an unbelievable line of 31 points and 10 rebounds in the win. The Pacers are short on bigger wings and his style of play can go in what will surely be an up-and-down game against the Wiz. For these prices, he’s an easy play on both sites, but especially DraftKings.

The Celtics are getting a little healthier for this game which could cut into Fournier’s overall production, but man did this guy ever turn it on in a big way after getting healthier following the Covid-19 time that he missed. He saw the shot volume increase in a big way over his final seven games of the season, taking more than 12 shots a game and averaging 20 points per game over that stretch. He’s coming way too cheap on DraftKings for this kind of production considering he was able to add rebounds and assists as well.

Bertans has been in the starting lineup for the Wizards over the last couple of games which does help raise some of the minute's floor. The unfortunate part for him, from a fantasy perspective, is that Westbrook and Beal control such an outsized amount of the fantasy production on this team that there is little leftover. But we need a few ways to save among guys who are going to at least play some minutes and here’s to hoping Bertans can bomb some threes.

McDermott should be in the starting lineup for the Pacers again in this game and like Bertans is coming cheap. We will need the savings on here to pay up for a couple of the superstars. He really needs to score in order to hit value but was able to do that in his last game when they played the Raptors in the lead up to the playoffs. He took the third-most shots on the team (15) and put in 20 points going for 4-8 from beyond the arc. Now, he didn’t do much else, but it’s the scoring we’re going to be looking for.

Sabonis is a center on DraftKings and he’s going to make for a very tough fade there. Though he just showed up on the injury report on Monday, it does look like he’ll play in this game. Like Westbrook, the floor is incredibly high on Sabonis considering he does just about everything for the Pacers. He’s a near-lock for 40 minutes and is priced just a tick lower than he should be on both sites. He doesn’t have quite the same upside as Westbrook, but he’s not priced like him either. Like Russ, Sabonis is a walking triple-double when things are going well. And if we need to save a little and need to fade Russ, Sabonis is the way to go.

The big question for the position on FanDuel is the status of the Celtics’ centers Tristan Thompson (FD 4400 DK 4800) and Robert Williams III (FD 5500 DK 5200). The latter is probable for this game which could cut into the former’s minutes. The position is so weak that I think you can consider either one on this slate. But it’s going to be a tough call.