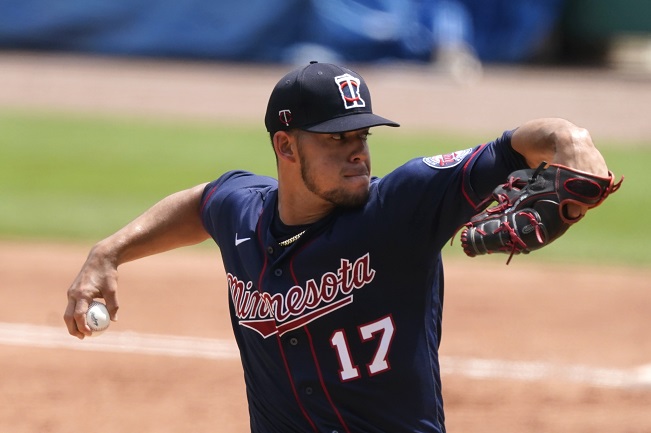 Yours truly was subbed out last week because of ACL surgery, but I'm back to it and ready to go here! I actually had a minor bink over the weekend, and I've been really zoned in because of how stuck at home I am right now. That has me ready for this eight-game Thursday slate which is a bit larger than the usual Thursday card. There's a lot to discuss, though, so let's go ahead and get into it!

Berrios doesn't get a lot of hype in the media, but this youngster has been one of the best pitchers in the AL over the last five years. This has actually been his best season to date, posting a 3.56 ERA, 1.09 WHIP, and 9.4 K/9 rate. What makes him really attractive is his floor, scoring at least 19 FanDuel points in all 14 starts while dropping at least 27 fantasy points in 10 of those. All of that makes him hard to fade against Cleveland, with the Indians ranked 21st in OPS and 29th in OBP. He's been dominant against them over the last three years, too, allowing three runs or fewer in all seven of his starts against them.

The Astros have been churning out starters for a decade now, and they found themselves another gem with Garcia. The right-hander has actually allowed three runs or fewer in all 12 starts he's made, generating a 2.69 ERA, 1.01 WHIP, and 10.6 K/9 rate since the opener. He's been even better recently, scoring at least 46 FanDuel points in four of his last five starts. That's nearly double our projection, and it would make him one of the best values on the board if he reaches that total again. Facing Detroit should make that much easier, with the Motor City Kitties ranked bottom-five in runs scored, OBP, OPS, xwOBA, and K rate.

While this DraftKings price is a bit lofty, we absolutely love this FanDuel pricing. A big reason for the discount is that Muncy just came off the IL, but that's no reason to keep him at just $3,500. What makes him such a good play is his vision, accumulating an absurd .419 OBP. That pairs beautifully with his .523 SLG and .942 OPS, some of the best averages of his career. That sort of plate discipline makes him a great option against a guy like Zach Davies, with the Milwaukee righty owning one of the worst K rates in baseball. Those subpar strikeout numbers have led to Davies posting a 1.49 WHIP which is scary since Muncy bats from the left side.

Aguilar hasn't been the stud we saw in the opening month, but he's still quietly having a really nice season for the Marlins. The first baseman is actually one of the league leaders with 50 RBI, and is chipping in a .798 OPS. That's pretty much the guy we've seen throughout his career, but he's done a ton of damage against left-handers. With the platoon advantage in his favor last season, Jesus amassed a .390 OBP, .566 SLG, and .956 OPS. All of that makes it hard to believe he remains this cheap, and it's not like we're worried about Lester and his 1.44 WHIP. There's some thought it could be Joe Ross starting, but he's not concerning either behind a 4.55 ERA.

Tyler Stephenson has been batting cleanup for the Reds and gets a solid matchup against Josh Tomlin if you need a catcher on DraftKings.

Semien earned himself some MVP votes a few years back in Oakland, but he's trumping what he did in that impressive campaign. Despite struggling in April, Semien is leading all shortstops with 9.7 DraftKings points per game. A lot of that has to do with his recent form, compiling a .311 AVG, .374 OBP, .595 SLG, and .969 OPS since the beginning of May. That's awful news for Kremer, with MS knocking five dingers over his last eight games as well. It's not like we anticipate Kremer slowing that down, posting an 0-6 record to go along with his 6.21 ERA and 1.48 WHIP.

Arraez is never really exciting to stick into your lineup, but it's hard to find someone this cheap who's likely to get on base multiple times. What's made him such a good on-base guy is his ability to avoid strikeouts, having just 63 Ks in 679 career plate appearances. That's Tony Gwynn-like rates, with LA generating a .318 BA, .381 OBP, and .789 OPS in that three-year span. That has actually earned him a spot atop this lineup, and that only adds to his value against a righty. All of that makes it really hard to believe he remains below $3K on both sites, and it happens to be a spectacular matchup, with Mejia maintaining a 6.11 ERA.

We already talked about how we want to use Semien against Kremer, but all of these Blue Jays bats are good options as well. The simple fact is, this is one of the best lineups facing one of the worst pitching staffs in baseball. Kremer is definitely one of those key cogs to that putrid pitching staff,  with Toronto projected for nearly six runs. If they do reach that total, Bichette is going to be one of the major reasons why. He's second to only Semien in terms of fantasy points among all shortstops, providing 14 homers, 61 runs scored, and 48 RBI. Those are some of the best counting numbers around, and it's why he's a great play on pretty much every slate.

Not many people even know who this guy is, but Rojas has quietly been an excellent shortstop for the Marlins. The 32-year-old veteran has really had a late-career resurgence, totaling a .275 BA, .355 OBP, and .796 OPS since the beginning of last season. One of the reasons he's been so good is the fact that he's slaughtering southpaws, owning an OPS above 1.200 against lefties in that span. While it is a small sample size, dominant numbers like those are impossible to overlook. The best part about using him is this pricing, though, allowing you to get whoever else you want at these dirt-cheap price tags.

This might be a bold statement, but I truly believe Ke'Bryan is on pace to become a superstar player. While he's dealt with an injury early in the season, Hayes just continues to post numbers. Since his late-season call-up last year, KBH is hitting .325 en route to a .400 OBP, .596 SLG, and .996 OPS. Those are quietly some of the best numbers from any third baseman, and he's just starting to scratch the surface on what's likely to be an incredible career. The name Carlos Martinez scares some people, but this dude has been a gas can for most of the year. In fact, Car-Mart has a disastrous 6.62 ERA and 1.35 WHIP.

Eugenio has had a nightmarish season up to this point, but recent results would indicate that he's starting to turn things around. Over his last 11 games played, Suarez is hitting .268. That's a huge bump from a guy below .180 on the season, and it's a good indicator that his swing is coming around. We love that with the raw power that this dude possesses, amassing a .510 SLG since 2018. Those variables make him a nice value at this price, and we certainly don't mind his matchup against a journeyman like Josh Tomlin, who's got a 4.99 ERA and 1.40 WHIP.

We've been holding off this Astros stack so that we could get both of these two stud outfielders in this section. Let's start by talking about their matchup, facing a righty like Jose Urena. That gives both of these guys the platoon advantage, and it's not like Urena is some sort of stopper. In fact, the Detroit righty has a 5.79 ERA and 1.59 WHIP and is likely to struggle with this scary Stros lineup.

Now that we discussed the matchup, let's get into these bats. Yordan is the jelly that makes this lineup taste so good, posting a .306 BA, .366 OBP, .515 SLG, and .881 OPS this season. That's the stud we've seen throughout his career, with Yordan amassing a .989 OPS for his career. That's bad news for Urena from the right side, with Tucker and Alv being the premier lefty bats in this lineup. Since his call-up, KT has a .292 AVG, .559 SLG, and .916 OPS, with the platoon advantage in his favor. Ride these two in the heart of this order and then build from there.

It feels crazy that Schwarber remains this cheap the way he's swinging the lumber right now. Over his last 11 games played, Schwarbs has nine homers and 16 RBI en route to a 1.000 SLG and 1.378 OPS. Those are Barry Bonds-like numbers, and it's clear that the baseball looks like a beachball to Kyle right now. What makes him even more intriguing is the fact that he gets to bat from the left side, accruing a .540 SLG and .879 OPS against right-handers since 2019. That's why the Nats like to bat him at leadoff, and it looks even better against a youngster with a 4.88 xFIP.

Schwarber is arguably the hottest hitter in baseball, but Mullins would like a word. The Baltimore breakout has been making an All-Star case over the last 20 games, accruing a .359 BA, .427 OBP, .744 SLG, and 1.171 OPS in that span. That doesn't even include the five steals he's swiped in that stretch, making him one of the most dangerous players in fantasy. That would put him in play against anyone, but we love him against an unknown pitcher like Anthony Kay. The fill-in starter has a 5.79 ERA and 1.57 WHIP for his career, no thanks to a 6.43 ERA this season.