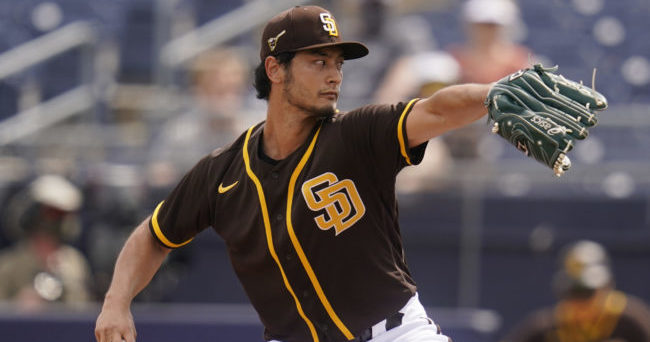 Buckle up tonight if you fall into the recency bias category as my top pitchers both went into the All-Star break struggling. The good news here is that both were All-Stars and have been very consistent overall. Darvish's short outing vs. the Nats can be attributed to hip inflammation which also put him on the 10-day IL but he is back healthy, with no restrictions, and gets a matchup vs. the Acuna-less Braves. This is also a buy-low opportunity as he is at his lowest price since early in the season. Darvish tops our projections and is my favorite pitcher in all formats.

Gibson bookended the first half with terrible starts(5 ER in each) but the good news is it was the work in between that earned him a spot on the All-Star team. Even with those two bad starts, he still held opponents to two or fewer earned runs in 14 of 17 starts good for a 2.29 ERA which is 5th-best in baseball. He opens his second half against a Tigers team that has won three straight but I am not worried as they rank bottom 10 in almost all offensive categories including wOBA, wRC+, and ISO. Gibson is in play in all formats.

First article for me out of the ASB so of course I have to go with one of my favorite plays all season in terms of PTS/$ value. I have mentioned over and over that Yuli is having a career year at age 37 as he enters the night hitting .314 with an elite .379 OBP and 137 wRC+. He and the Astros not only get a plus matchup against JC Mejia who has given up six earned runs in three of his last four starts, Gurriel's price continues to sit below $5K on DraftKings making him a core play for me in all formats.

I never thought I would be mentioning Anthony Rizzo as a value play but here we are getting him at sub $4K prices on DraftKings. Sure, he isn't having a typical Rizzo-type season hitting just .246 on the season but still has a ton of power upside and sits with a 112 wRC+ on the season. He faces the Cardinals who will be going with a bullpen game today and that is good news as they have been below average in that area. Rizzo isn't a must-play on FanDuel but if you need some salary relief on DraftKings, he is one of my top values.

With even more injuries to the Angels, David Fletcher is back up in the leadoff spot and a big reason the Angels are still hanging around the AL West race. Since the jump back up the lineup in late June, Fletcher is hitting .400 with a .427 wOBA and 175 wrC+ and comes in with seven multi-hit efforts in his last nine. The matchup is nothing to write home about but the opportunity and price for Fletcher is too much to pass on. I will have exposure in all formats.

Another player who may not have the best matchup tonight but has been red-hot and comes at a discount is Josh Harrison. The utility player has been very busy with a ton of injuries and has produced for fantasy lately as he comes in with hits in three straight since the ASB including back-to-back multi-hit games where he also picked up three doubles and a triple. On top of that, he has been very good against lefties with a .374 wOBA/134 wrC+. All things considered, he is one of my top value plays on this slate.

Not a surprise here that my top team is the Blue Jays and I will be trying to fit multiple players in almost all my lineups. At shortstop, we have a choice between two All-Stars in Bichette and Semien and I don't think you can go wrong with either as they have very similar stat lines on the season. For me, I slightly lean Semien who hits leadoff and has been quite a bit better vs. righties with a .384 wOBA/143 wRC+. I will have exposure in all formats.

For value, I am all over Miguel Rojas who is projected to be back up in the leadoff spot tonight vs. lefty Jon Lester. This is great news as not only has Lester struggled but Rojas has crushed lefties to the tune of a .407 wOBA and 161 wRC+ this season. He has also came out of the break hot with hits in all four games with three doubles. He is one of my top PTS/$ plays on the slate.

First of all, it appears one site believes in Franco much more than the other with the huge price differential. No matter the price, the #1 prospect in baseball is primed for an explosive second half and already has hits in all three games since the break including his third home run yesterday. The get a decent matchup vs. Spenser Watkins who has walked three in each of his last two starts and while he likely won't go deep, the O's bullpen is one of the worst in baseball. Franco isn't a must-play on DraftKings but is close to it on FanDuel where he sits in the mid $2K range.

Also Consider: Rafael Devers(BOS) who has absolutely crushed righties to the tune of a .423 wOBA/167 wRC+/.364 ISO or Joey Wendle(TB) on FanDuel for cash or both sits for GPP as TB in a good spot as stated above

The issue in the outfield tonight is that there just aren't enough spots for everyone. Two teams I definitely want exposure to are the Jays and Astros and let's start with the Jays who have been scorching hot out of the break and lead all teams in implied runs tonight. While the 1-2-3 hitters are $5,500-$6,300 on DraftKings tonight, we get Springer and Teoscar at sub $5K prices.

For cash, I lean Teoscar who was one of three Jays to start the All-Star game and came into the second half hitting .297 with a .350 wOBA/120 wRC+. Springer's price shot up into the $5K range momentarily before the ASB but is back below $5K and he is heating up going 3 for 5 in the doubleheader yesterday with a home run. There are plenty of ways to go with the Jays tonight and if choosing just two, it's Springer/Teo in the outfield.

The Astros are right on the heels of the Jays in terms of implied runs and overall offensive performance this season and also have two outfielders in great spots. Let's start with Brantley who, outside the power(6 HR), is having a career-year hitting .330 with a .374 wOBA and 143 wRC+. On top of that, he hits second in the lineup and is massively underpriced on DraftKings.

The reason I like the Astros outfielders so much is the matchup against Mejia who has really struggled against lefties giving up a .404 wOBA and .571 SLG. This is where Kyle Tucker enters the mix but is GPP only hitting down in the six-spot. He is more expensive and hits down in the order but has a ton of upside with 15 home runs in the first half with a .227 ISO.