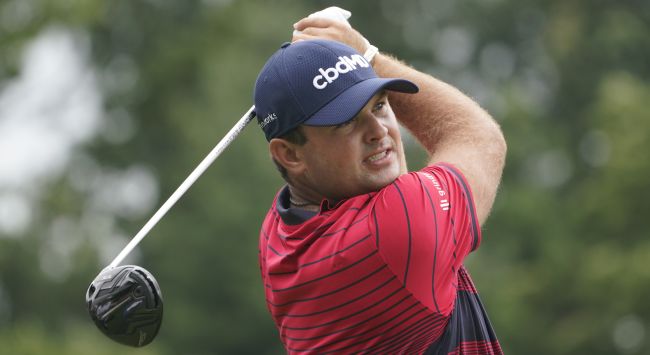 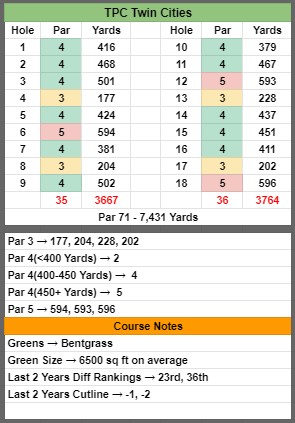 After all the narratives tied to the OPEN Championship, it was Collin Morikawa coming away as the "Champion Golfer of the Year". If you were tailing my player pool in the article and especially on my sheet last week, you enjoyed the win as much as me and come into this week with some momentum.

For the third year in a row, the PGA Tour heads to TPC Twin Cities for the 3M Open and both previous champions in Michael Thompson(2020) and Matthew Wolff(2019) are in the field. The field is headlined by World #2, Dustin Johnson, and #9 Louis Oosthuizen but overall is pretty weak with just eight of the Top 50 teeing it up. The big narrative leading into this event, at least from a fantasy perspective, will be the players returning from the OPEN and as of now, I am undecided on my approach but will address it more in chat as lineup lock approaches.

The course is an Arnold Palmer-designed Par 71 built on sand and created to be a links-style course with very few trees. This means the wind will be a factor and I always go more in-depth on the weather on the Wednesday night live show. One thing we do know is that if the wind is down like it was the last two years, the course is very gettable and it has shown with winning scores of -21(Wolff) and -19(Thompson). The other big difference that could really affect scoring this week is the drought which will have the course play faster and firmer than previous years.

Overall, when looking at my stats model, I will be heavy on Strokes Gained: Ball Striking. When breaking that down further I lean more on Strokes Gained: Approach and then Proximity from 175-200 and 200+ yards as that is where 45% of the approaches have come from the first two years here. With the course being a Par 71, I also weigh Par 4 Scoring heavily, and if using Fantasy National Golf Club I also look at the 450+ Yards range, as well. Finally, as with every week, Birdie or Better % is near the top of my model as scoring is king!

With all that said, let's dive into the picks.

First of all, if you are playing the OPEN and travel narrative, Reed is the only player in the top tier who missed the cut giving him two extra days to prepare(lol). It was his fifth missed cut of the year but he also has a win at the Farmers, six Top 10's, and 13 Top 25 finishes in 19 stroke-play events. The upside is huge and he does return with some knowledge of the course finishing T23 in 2019. More than that, he has been playing some really good golf coming in and ranks 4th in SG: Tee to Green, 9th in SG: Approach, 7th in Par 4 scoring, and 19th in Opportunities Gained. He is my top play of the week in DFS and I will also be betting him outright at 20-1.

I will have much more exposure to Reed in all formats but in my GPP builds for 20-max, I do like mixing DJ in who could fall outside the Top 5 in ownership. This season has been a roller coaster ride, to say the least, and after a Spring low DJ appears to be heading back in the right direction. He has put together four straight Top 25 finishes including two Top 10's, one of which came last week at the OPEN where he hit 72% of greens. The narrative of playing the following week does not apply to DJ as he has always found success at the RBC Canadian Open(2017-win, 2015-T8, 2015-T2) which had followed the OPEN for years. This si a spot where my exposure will rely heavily on ownership projections on Wednesday so be sure to tune in to the Live Show on my YouTube channel. Either way, I like the uspide this week in the weak field.

Even with big names like DJ, Oosthuizen, Finau, and Reed at the top it is Hank Lebioda sitting #1 in my initial model. While that seems crazy he does check almost every box starting with form as he has not only made seven straight cuts but also put together three straight Top 10's. He now returns to the 3M Open where he looked good in his first two trips with a T34 and T26. All things considered, he feels a bit underpriced on DraftKings and is my favorite PTS/$ play in the mid-tier.

The waters start getting murky as we head out of the top tier but one player who checks almost all boxes and feels a bit underpriced for this field is Charl Schwartzel. First of all, he looked great here a year ago finishing T3, and was one of just 11 players to gained strokes in every strokes gained metric. He now returns in some pretty good form having made the cut in nine of his last 10 events which include a T3 at the Byron Nelson and six finishes of T26 or better. At these prices, I will have exposure in all formats.

There is a good chance Hoag is very high owned this week but fits the model so well and checks almost every box. It starts with form as he has bounced back in a huge way since a Spring stretch where he missed six straight cuts. He comes in having made five of his last six(one MC was US Open) cuts including a season-high T11 at the Barbasol last week. The irons have been his go-to as he has gained 15.4 strokes on approach over his last three events. Ride the hot iron game and take advantage of the value pricing for a guy who finished T12 here last year.