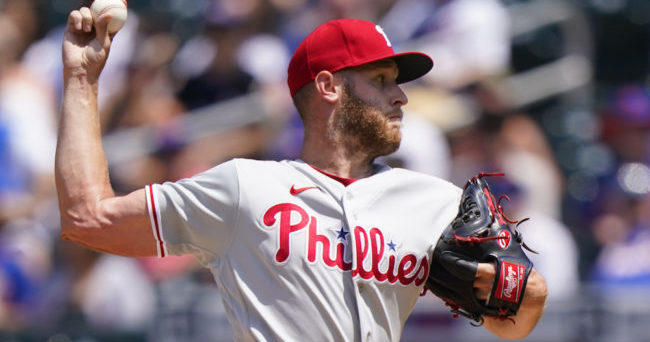 Wheeler has turned in a borderline Cy Young worthy season so far with a 2.74 xFIP that’s only slightly worse than the 2.37 ERA. He’s striking out more than 30% of the batters he’s faced and has a 5.3:1 K:BB ratio. The Nats have been hit with some Covid issues and Wheeler is a -202 home favorite in this one. I think he’s the chalk pitcher on the main slate and it is for good reason. He’s been awesome this season.

Don’t let the 5.32 ERA fool you, Heaney has been much, much better than that this season. He’s been hurt some by an elevated BABIP and the 67% LOB% shows some signs of running bad. The 3.83 xFIP is more in line with his peripherals which have him striking out 10.74 batters per nine and walking only 2.86. He’s a -200 home favorite against the lowly Rockies and makes the perfect DraftKings SP2 on this slate.

Get ready to see a lot of White Sox on this slate with them facing off against Bubic. They have, for now, the highest implied run line on the slate and for good reason. Abreu hasn’t been able to recreate his 2019 or 2020 season at the plate this time around with the power numbers dipping somewhat dramatically, but he’s still been great against lefties for his entire career. In that split, Abreu has a .922 OPS and 148 wRC+. The price is a little steep on DraftKings especially, but there is a strong case for paying up.

Patrick Corbin is now a shell of his former self and the Phillies are big-time favorites in this game. Realmuto isn’t putting up quite the same power numbers he’s had in the past, but there is still some pop in the bat and he will steal a base or two as well. He’s been basically platoon neutral for his career, so there isn’t an overwhelming advantage facing a lefty here, but the Phillies are in an excellent spot against Corbin in this matchup.

Like we said with Realmuto, the Phillies are in a good spot against Corbin who brings in a 4.46 xFIP and 5.71 ERA to the matchup. His K’s have dropped off a cliff this season This is good news for Segura who has close to an 80% contact rate this season and an OPS creeping over .800. He should hit in the leadoff spot for this one and has been slightly better against lefties for his career with an OPS around 30 points higher in that split.

the Diamondbacks aren’t a very good offense, but VanMeter won’t cost you much either. He should be in the leadoff slot against Jordan Lyles who is among the worst regular starting pitchers going in the game today. VanMeter strikes out at a 30% rate this season, but also walks 12% of the time. He’s not all that good of a hitter, but he’s also coming at very cheap price points on both sites and has the advantage of hitting at the top of the order. That makes for an okay punt spot at second base.

Even with a lower OPS, Anderson is still a fantastic fantasy option because of the speed on the base paths and his ability to get the ball into play. Hitting leadoff against the lefty Bubic makes him an excellent play on this slate with the White Sox set to score a bunch of runs in this one. Anderson has 16 stolen bases on the season with nine home runs adding power to the resume. He’s been significantly better against lefties for his career with an .847 OPS in that split and 127 wRC+.

I like Anderson as the easy cash play in this situation considering the fantasy profile, matchup and slot in the lineup. But if you are looking to go a little cheaper then Iglesias could be fine as long as he’s hitting fifth in the order or higher. It’s more of a price play against Gonzalez and shortstop does get much worse on this slate after Anderson. But Iglesias is cheap enough, especially on FanDuel, to consider.

I think we are going to have to go a little cheaper at third base on this slate with the pickings pretty thin at the position. Hayes is hitting third in the anemic Pirates’ offense and isn’t all that dynamic of a bat. But he has an OPS over .700 and puts the ball in play around 70% of the time. Not overwhelming numbers, but this is a bad position.

The same can be said for Isan Diaz who hits second in the Marlins’ order and has a good matchup against Jorge Lopez. Diaz has been terrible this season with the OPS and was even sent back down to the minors. It’s unclear if it totally turns around, but the BABIP is low enough that one could make the case that he’s also running very bad. He’s walked 11% of the time for his career has shown some flashes of power.

The Angels aren’t a great offense, but Gonzalez isn’t all that good of a pitcher either. The latter comes in with an ERA over 6.00 and a 4.93 xFIP. He strikes almost no one out though does induce some grounders. Ohtani has been among the best hitters in the game this season with 36 home runs and a 1.044 OPS. He’s as elite as it gets, especially in the power department and this is the spot to spend up on him.

Meanwhile, Upton is healthy now and has been at least serviceable on offense with a mid-.700s OPS and 14 home runs through 281 plate appearances. Upton’s biggest issue is the strikeout, going down swinging almost 30% of the time this season. But that’s much less of a concern against Gonzalez in this matchup. I like stacking some Angels in cash here for sure.

Eloy Jimenez is back in the White Sox lineup after an extended absence and has slotted right back into the middle of the order. He has a mid-800s OPS over his first 738 plate appearances, relying mostly on power for his production. He has 46 home runs in that span to only a 6% walk rate. Hitting in the heart of the order against Bubic has him in play, especially on DraftKings where the price is simply a mistake at sub-$3K.