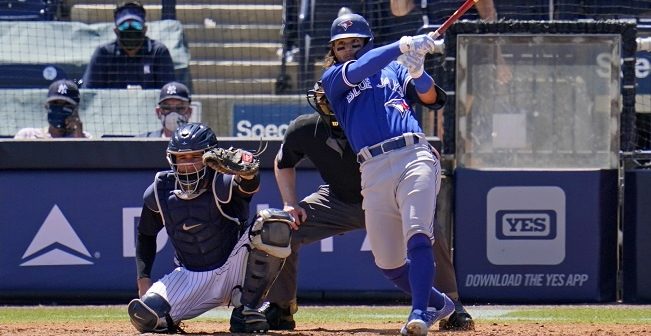 AdamWainwright is having a little bit of a turn back the clock season this time around, striking out more batters than he ever has in his career, sporting the best xFIP (3.79) he’s seen in the last seven seasons. It is a nice story for the 39-year-old who was starting to look a bit cooked. Now he’s facing the Twins who sold some pieces off and are in rebuild mode off a younger lineup. I think he’s a solid play at these prices and the matchup is a good one. This is a rough day for pitching and we are going to have to take what we can get.

Speaking of taking what we can get, Montgomery is a good, not great option here, but that is kind of the story with everyone on the slate. The good news is he gets a choice matchup against the lowly Marlins who rank second-to-last in the league in team wOBA and don’t have much in the way of getting better for the rest of the season. They strike out 26% of the time as a team and Montgomery is putting down about a batter an inning. When lines release for this game (they haven’t yet) he should be a big favorite.

The Mets have made some improvements to their lineup and could start causing some real damage going forward. On Sunday they get Vladimir Gutierrez who is among the worst regular starters in the game, sporting a 5.75 xFIP through 60+ innings this season with a putrid 1.5:1 K:BB ratio. Alonso hasn’t been able to recreate his rookie season numbers, but he is still a deadly hitter with a mid-800s OPS and 23 home runs in 374 plate appearances. We aren’t going to be paying up for pitching, so the bats are where it is at. So to speak.

Mancini is mostly platoon neutral throughout his career but has been slightly better against lefties. He has a 119 wRC+ and .348 wOBA in that split which are solid and he’s facing a weaker southpaw on this slate. Alexander strikes out fewer than eight batters per nine and has an xFIP close to 5.00. We usually don’t go Orioles on these cash slates, but this is a good matchup for them and Mancini isn’t overly expensive.

Happy is still coming so cheap on FanDuel that he is tough to pass up there. With all of the Cubs trades, he’s moved up to the third slot in the lineup and that is so good for the plate appearance expectation at these price points. He’s basically a punt play on FanDuel. The switch-hitter is much, much better against righties for his career with a 113 wRC+ and .824 OPS, about 150 points higher than when he faces lefties. Keep an eye on who the Nationals throw out there on Sunday.

With the injuries to Nimmo and Lindor, we should see McNeil around the top of the lineup on Sunday. He isn’t looking like he will repeat the power numbers from 2019, and the OPS is in the mid-700s right now. But he’s a tough out, putting the ball in play around 80% of the time on the season. And that plays well against Gutierrez who is pretty damn bad. If McNeil hits around the top of the order for the Mets he’s a great FanDuel play for starters.

The Blue Jays are often projected to put up the most runs on a given slate because their lineup is stacked and they don’t give opposing pitchers many outs. The top of the lineup is especially dangerous and though Bichette has moved from the second slot to clean up he’s still a play on most nights. That is the case here against Keller who can’t dial much up in the way of K stuff, and will even get a little wild to boot.

Like we said with Alonso, the Mets are in a good spot here against Gutierrez who is garbage. Baez came over at the trade deadline from the Cubs and is an interesting case study in MLB value. On the one hand he strikes out a whopping 36% of the time. On the other hand, he has a .484 slugging % with 22 home runs. He’s a two true outcomes dude through and through. It is a little expensive cash because he’s feast or famine, but the matchup is a good one.

Riley should be in the cleanup spot for the Braves on Sunday against Brett Anderson. He is having an excellent season with the OPS pushing to around .900 on the back of his 22 home runs and 11% walk rate. He is basically a platoon-neutral hitter for his career, though above average in either split. He does have more power against lefties with a .262 ISO, but strikes out more in that split as well. Against Anderson that is less of a concern.

Candelario is a decent, not great option at third but the position is a weak one on Sunday. He would go fine with some of the Tigers we are stacking in the outfield and should hit in the cleanup spot, or fifth for Detroit. He takes some walks at 11% though doesn’t have a ton of power. It is just a matchup play against Watkins who barely strikes out six batters per nine on the season.

We don’t offer up a lot of Tigers these days, but they have a great matchup against Spencer Watkins and actually carry in with them one of the better expected run lines for the day. Watkins has a 5.54 xFIP on the season, and right around a 2:1 K:BB rate. He is a very weak arm. Baddoo should, once again, be in the leadoff slot for the Tigers and has had an excellent season. The OPS is in the low 800s and he combined power (10 home runs) and speed (14 stolen bases). It gives in a solid fantasy floor.

Meanwhile, the switch-hitting Grossman is in a similar spot. He should hit third and does have a lot of value in fantasy. He has 16 home runs and 12 stolen bases on the season and is walking 16% of the time. That provides such a high floor in this matchup against a very weak arm.

Hays, like Mancini, faces off against a weaker lefty on Sunday in Tyler Alexander. The former is better against southpaws for his career with an OPS in the mid-700s and an above-average 102 wRC+. He should hit second in the lineup and is coming very cheap on both sites, especially on DraftKings at under $3K.