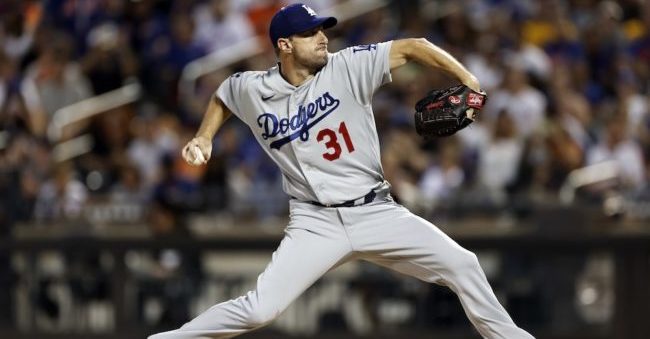 In his three starts as a Dodger after coming over at the trade deadline, Scherzer has gone 16.1 innings with 23Ks and three walks while allowing a total of four earned runs. I would say this is what LA was hoping for with their new ace. On Saturday, he will face off against a stumbling Mets team that has been on a backslide of late. He is a massive -258 home favorite here and will likely be the cash game chalk on the afternoon slate of games.

Eduardo Rodriguez rings in as a -325 home favorite against the lowly Orioles, some of the best money line win odds you will ever see for a starting pitcher. He’s had an excellent season from a peripheral's perspective with a 29% K% rate and 4:1 K:BB ratio, easily the best of his career. He’s been done in somewhat by a BABIP against 50 points higher than his career average and struggled some with men on base. That is why the 4.97 ERA is more than 1.5 runs higher than his 3.31 xFIP. I am trusting the latter number more for what E-Rod has done this season.

Posey has really turned back the clock this season. After looking semi-cooked for a couple of seasons in a row, the 34-year-old has bounced back in a big way with a .951 OPS, thanks to 15 home runs and a career-best 13.6% walk rate. He is running hot on BABIP for sure, but the rest of the peripherals have been solid. It isn’t a great matchup against Manaea, but this is the better side of Poseys split.

Walker has dropped down the D-Backs lineup some, now projected to slot into the sixth or seventh spot. That is because he has really struggled on the season with an OPS under .700. That is, in some part, because the power is gone from the 29 home run season back in 2019. But he takes more walks against lefties and has a higher .wOBA in that split as well. I think, considering he is hitting in Coors, that the DraftKings price is just too cheap. It is getting close to the minimum now.

The Indians went into moderate tank mode at the deadline and ended up shifting their lineup around some. That left Rosario in the second spot and he has stuck there for the short term. The .723 OPS plays fine at these prices and Cleveland has a solid run line that is pushing up against 5.0 runs at the time of this writing. I like the FanDuel price much better than the DraftKings price for sure.

Rodgers should be in the second slot for the Rockies on Saturday against Gallen and this team has, by far, the highest implied run line on the slate. Gallen can strike batters out, but he issues a lot of walks as well. Rodgers has been decent on the season with a mid-800s OPS thanks to a solid contact rate while making hard contact almost 40% of the time. He is cheap enough on both sites and you aren’t paying through the nose with E-Rod at pitcher so fitting Rockies should not be a problem.

Trea Turner is expensive but that is what happens when you hit at the top of a lethal Dodgers lineup and have a power/ speed combo like this guy. Over the season, between Los Angeles and Washington, Turner has 18 home runs and 24 stolen bases. He is getting on base 37% of the time and only strikes out at a 17% rate. Get ready to see some other Dodgers on this list today because the matchup against Rich Hill is a good one and facing lefties is the slightly better side of Turner's split.

We prefer Story against lefties, but exceptions can be made, especially when the Rockies are projected for the most runs on the slate. Story isn’t having quite the power season we have seen in the past with an OPS under .800 while on pace for his fewest per-plate appearance home run rate of his career. But while better against lefties, he has been well above average against righties for his career. And Story has been significantly better in the second half of the season this year with a wRC+ almost 40 points higher than the first half.

Turner remains one of the toughest outs in the game and the OPS has climbed back up to .874 on the season. He is up and over 20 home runs on the season with a .204 ISO and .378 wOBA. Turner has been mostly platoon neutral for his career, but has performed better against lefties over the last couple of seasons. The Dodgers are in a good spot against Rich Hill who has an xFIP pushing up against 5.00 and is striking out less than a batter an inning.

Devers moved up to the second slot in the order on Friday and that could be a move that sticks for the Red Sox. A couple of slot jump in this order does make a difference even at these prices. While the Sox have stumbled significantly in the second half, Devers is still on pace for one of his better seasons with an OPS over .900 and will likely eclipse his career-best power numbers. He has 29 home runs and his best mark was 32 in 2019. But this season he will have done it in many fewer plate appearances.

Both of these guys are extreme splits dudes who have crushed lefties over their shorter careers. So getting them against an above-average lefty is a good place to be at their individual prices. So that is the good news. The bad news is because the splits are so extreme their is real risk that they each are pinch-hit for later in the game when/ if a righty reliever enters the mix. I still think it is worth the risk but understand that we could be seeing early exits on both, especially Ruf.

Joe has had the price come up in the short term but it is for good reason. He’s moved up into the leadoff slot for the Rockies and has been pretty damn good with his opportunity. He has seven home runs on the season with a .845 OPS and a .364 OBA. He doesn’t strikeout a ton and though this is a righty-righty matchup Joe has been platoon neutral so far in his career, even walking a little more in this side of his split.

Meanwhile, it’s tough to know what to do with Blackmon at this point. He is still hitting in the middle of the Rockies lineup in Coors against a weak righty. So that all lines up. But he has also seen a total power outage this season and last with just 15 home runs in his last 689 plate appearances. The ISO has fallen off a cliff. But I am still willing to take the risk because of the park and matchup.