Five and a half years! That is the amount of time between Tony Finau's first win and his huge win at the Northern Trust last week. The win also thrust him into the #1 spot in the FedEx Cup standings and like I mentioned last week, the new playoff structure really rewards those top seeds putting Finau in a great spot.

The Top 70 players in the FedEx Cup Standings now get one more shot to position themselves inside the Top 30 at this week's BMW Championship. Not to be overlooked by the Finau win, six players(Noren, Van Rooyen, Hoge, Varner, Mitchell, & Higgs) played their way into this week.

Like last week, this event has a course rotation and this year will be hosted at Caves Valley Golf Club. It will be new to almost every golfer in the field as it has never been used on the PGA Tour since opening back in 1991. It is a traditional Par 72 that is listed at 7,542 yards on the scorecard and is one of the longest courses the players have seen this season. That doesn't necessarily mean load up on bombers as there rough is listed at 3 inches on average and there are many hazards and/or doglegs that appear to force some positioning off the tee to have a shot at the green. This has me more just looking at overall Strokes Gained: Off the Tee and if you are breaking it down further look for bombers who have better driving accuracy/fairways gained or non-bombers who have very solid long-iron play(175-200 and 200+ yards).

With that said, let's take a look at the scorecard and then get into the picks. 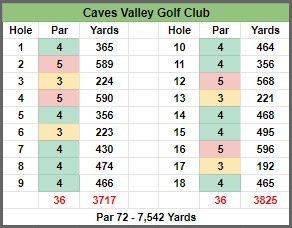 Rahm enters the BMW Championship in a great spot sitting #2 behind Finau and is still arguably the hottest player in the world. He posted his third straight podium finish in last week's playoff-opening event and what I liked most is that he led the field in SG: Tee to Green(+12.2) while losing -.3 strokes around and on the greens. Looking at the last 24 rounds data(via FNGC), Rahm is one of only two players in this field ranked Top 20 in both driving distance gained and fairways gained which should play as a huge advantage at this course. I have Rahm winning and taking back the #1 spot heading into the Tour Championship and with a ni-cut event which plays into the stars and scrubs build, I will have exposure in all formats.

He is coming off his first missed cut in his last 17 events(10 months) but I am not concerned at all. He comes in ranked #2 behind Rahm in both my short term and long term model with his elite tee to green game that ranks at the top of the Tour. He isn't the longest hitter off the tee but is still above-average and more importantly finds a ton of fairways(3rd in fw gained last 24 rounds) and has above-average long iron play. With the 7th highest price tag on DraftKings, I will have a ton of exposure and with all the buzz surrounding Rahm, JT, and Xander we could get Morikawa at an ownership discount this week.

It doesn't always work out this way with my picks but so far are directly correlated to the rankings in my model as Harris English comes in at #3 this week. He enters the BMW Championship with excellent form having made nine straight cuts going back to April and has tallied three Top 5 finishes in his last five events including his second win of the season at the Travelers. Statistically, he stands out in every way with above-average distance and ranks 13th in fairways gained, 13th in Proximity from 200+, 1st in par 5 scoring, and 4th in birdie or better over the last 24 rounds. He is a core play in all formats for DFS and I will also dabble with a Top 5/Top 10 in the betting markets.

Let me preface by saying I do Na feel great about this pick but it is just too hard to ignore the trending form in the summer months. He entered the playoffs with runner-up finishes in two of his last three events and then tallied a T8 at the Northern Trust last week. The ball striking was pretty much a disaster as he lost nearly two strokes both off the tee and on approach but gained a whopping eight strokes around the green and three-putting to save the day. On any course with smaller greens and potential lower GIR %'s, Na is usually going to be around the top half of the leaderboard and feel he bounces back with the ball striking and to cap it off he is best on bentgrass in terms of putting. At these prices, I will have exposure in all formats.

If you are going the starts and scrubs route this week why not just go straight to the bottom and ensure you get two top plays in your build. Swafford isn't just min price this week, he has been trending up in terms of form with three straight made cuts including a T11 last week at the Northern Trust pushing him up to 40th in the standings and one more solid finish away from making the Tour Championship. His around-the-green game and putter area always a concern but he is the other player outside of Rahm who ranks Top 20 in both driving distance and fairways gained over the last 24 rounds which should be a big benefit here. If he can just putt field average I can easily see a Top 25 finish.