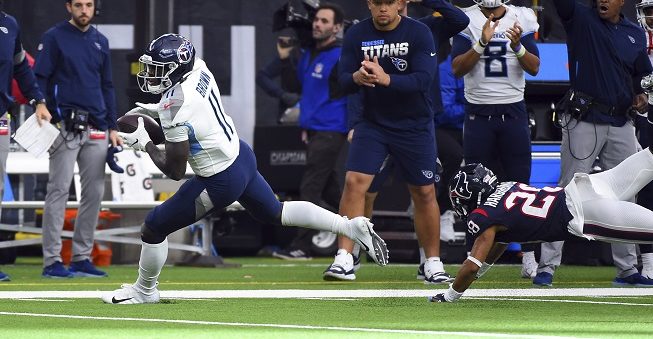 While Jackson is likely to play in Week 4, it does look like he is maybe dealing with a minor back issue, possibly stemming from the flip he did in the end zone to cap off the Week 2 win over the Kansas City Chiefs. His 16-31 game against the Lions in Week 3 was anything but efficient, though would have definitely looked better if Marquise Brown hadn’t just flat-out dropped two touchdowns on back-to-back drives earlier in the game. That would have led to an entirely different game script and likely less forced passing situations for Jackson. Regardless if he’s a little banged up here against Denver, I think we can take a wait-and-see approach with rostering him in lineups. There are some minor red flags with this situation.

Andy Dalton is practicing this week meaning he could be ready to get back under center in Week 4 for the Bears. Week 3 was a disaster of the highest order for Chicago with Justin Fields going 6-20 for 68 yards through the air while getting sacked at least a million times. The Bears are shifting play-calling away from Matt Nagy which I guess could help some, but this is a rough situation. It looks like Dalton could start, but from a fantasy perspective, this is a stay-away situation. The offense being compromised unfortunately does affect the likes of guys like David Montgomery and Allen Robinson because it is so tough to trust the quarterback play.

After sitting out Week 3, it looks like Dalvin Cook is going to be a full-go in Week 4 against the Browns. This one went almost down to the wire last week, pointing to Cook being very close in terms of being able to play then. It isn’t all that surprising that he’ll suit up in this one with a few extra days to get healthy. It isn’t a good matchup against the Browns so I think we can mostly avoid this situation for cash games. And Mattison was so effective in Week 3 that we could even see more of a timeshare in an effort to not overload Cook.

This is the biggest news of the week with Christian McCaffrey set to miss multiple games with the hamstring injury. That should vault Chuba Hubbard into nearly every down capacity for the Panthers who have shown a willingness to run single back sets with the same RB when CMC has gone down in the past. In Week 3 Hubbard carried the load in CMC’s absence, carrying the ball 11 times and seeing five targets as well. That was good for 79 total yards in 40 snaps. Royce Freeman is lingering here which makes me a bit worried, but I think for this week we need to take our chances on Hubbard and hope he plays around 70-75% of the snaps. If that’s the case, the usage should be there in what could be a higher-scoring game.

Gibson was trending in the wrong direction this week, missing a couple of practices, but he got in a limited session on Friday and there is increasing confidence he will be able to take the field. If he were to sit we would likely see more of JD McKissic who averaged a 45% snap count in the last two weeks.

After sitting out Week 3, it looks like Darrell Henderson is going to be back in action for the Rams against the Cardinals. On the one hand, this is a smash spot for Henderson seeing as how the Rams are -4.5 home favorites against Arizona and in his previous two starts, Henderson touched the ball 18 and 17 times respectively, even playing in 94% of the offensive snaps in Week 1. But Sony Michel looked moderately effective last week and it’s hard to imagine Henderson going back to a near-100% role coming off the injury. At his DraftKings price, it’s very tempting to hope on the full run, but I’m somewhat skeptical.

These are the two big ones at the wide receiver position this week and could greatly impact how lineups are constructed. For starters, while not officially ruled out quite yet, and doesn’t look like A.J. Brown is going to suit up in this one after leaving the game early in Week 3. He could be headed towards an IR stint. And then there is Julio Jones who hasn’t (yet) practiced this week and could end up sitting out as well. Nick Westbrook-Ikhine played the most wide receiver snaps (78%) in week 3, getting four targets and 53 yards with a touchdown. He is likely to be a major beneficiary of this injury stuff, in play even if Julio is on the field. We would likely see more of Chester Rogers as well who played 41% of the snaps in Week 3.

As we said in our Week 3 Cash Game article, this likely just means the Titans lean even more heavily (if that’s even possible) on Derrick Henry in a game they are favored in over the lowly Jets. Update: Both Jones and Brown have been ruled out

The status of George Kittle is very much in doubt heading into Week 4 against the Seahawks. He hasn’t practiced this week and coach Kyle Shanahan added to the pessimism by saying Kittle’s availability was less than guaranteed going into Sunday. Kittle is coming off a 7/92 game on nine targets last week, playing in 100% of the offensive snaps. If he couldn’t go we would likely see Charlie Woerner step into the role. He would be nearly impossible to trust from a DFS perspective. On the pass-catching side, Deebo Samuel has seen elite target share this season and is already a DFS value. We also saw Brandon Aiyuk get back into the mix last week, playing 86% of the snaps and going for 4/37/1 on six targets. He could jump into consideration.

Both Slayton and Shepard are set to sit out Week 4 against the Saints, leaving the Giants' wide receiver corps pretty thin. Kenny Golladay, theoretically, would be a top option though he only played in 69% of the snaps last week and has just 19 targets this season. We could see that increase for sure, but it's really tough to trust. First-round draft pick Kadarius Toney could see more usage. Meanwhile, Collin Johnson lined up on the outside last week and finished with five catches and 51 yards on seven targets. He is an interesting, off-the-radar option.Update: Slayton and Shepard have been ruled out