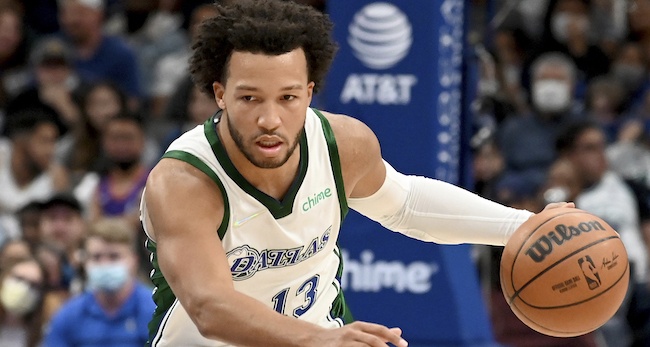 Holy crap, this card is nuts! The 11 games would be wild no matter what, but all of the injuries make it one of the most fascinating slates of the season. We have numerous superstars expected to sit here, and it's opening up a ton of value across the board. There's a lot to discuss and more recommendations than usual, so let's go ahead and get into it!

It's hard to remember a team being this shorthanded. The frontcourt is absolutely decimated by injuries, but the backcourt lost its best scorer too. That happens to be Collin Sexton, leaving Rubio and Garland to feast. Garland has been the most reliable one, scoring at least 23 DraftKings points in every game this season, en route to a 32-point average. He's been even better without Sexton, scoring at least 28 DK points in six of his last seven games while cracking 35-plus in four of those. Rubio has also been stepping up for Sexton, scoring at least 29 DK points in five straight fixtures. He's also averaging nearly 40 fantasy points per game in that span, doing that damage off of the bench. Both of these guys should be asked to do more here with even more Cavs out, and we'll dive into that a little later in the article!

This is the easiest play of the day. Dallas will be missing Luka Doncic here, leaving Brunson as the starting point guard. This is a guy who was going off anyway, averaging 30 DK points per game in just 29 minutes a night off the bench. That's a good indicator of how good this guard can be, and we absolutely love that he'll swallow up some of the usage that Doncic will leave behind. We're talking about a superstar with a 32 percent usage rate, who averages about 30 points, 10 rebounds, and 10 assists on 20 shots a night. We don't expect Brunson to do quite that, but 25 points and 10 assists are not out of the question. Brunson is the best play on the board in the $6K range if he does that and we truly believe he has a 5X floor in this spot. Not to mention, Jalen has a 28 percent usage rate with Doncic off the floor, averaging 1.2 DK points per minute in those circumstances.

Lonzo Ball is an excellent value below $7K. We also love the way Dennis Schroder is playing with Jaylen Brown sidelined.

It feels weird to recommend DeRozan in this price range, but he's earned every bit of it. On the contrary, he should probably be about $1,000 more with the absurd numbers he's posting. The former Raptor is averaging 26.9 points, 5.4 rebounds, and 4.1 assists en route to 42.1 DraftKings points per outing. It's rare to see a player's average above his projection, but that just shows you how amazing this dude has been. DD has been even dandier recently, scoring 105 combined DK points over his last two games. That boost in production is undoubtedly due to Nikola Vucevic's absence, and he should continue to get fed usage and shots as long as Vooch remains out. In addition, Portland ranks 21st in total defense this season.

THT is sneakily one of the most underrated players in the NBA. He showed flashes of brilliance at times last season and has looked to take another step this year. While he's only played two games. Horton-Tucker has tallied 69 combined DK points in those first two games, picking up a start in both of those. He also received 37 minutes in the most recent outing, telling us that he's not facing any sort of minutes restriction. The simple fact is, THT is the third-best player on this team when LeBron James is out, and it looks like they're going to lean on him until The King returns. Milwaukee isn't as scary of a matchup as it sounds either, with the Bucks ranked 20th in defensive efficiency ratings.

Bradley Beal is expected back here, and his price is too low below $10K.

THJ is a tricky beast with his inconsistencies, but this is a fantastic spot for him to succeed. He actually averaged nearly 30 DK points per game when either Doncic or Porzingis sat out last season, seeing his scoring boost by 20 percent. It's easy to understand why with Hardaway attempting about 20 shots every 36 minutes he's on the floor without Luka. The numbers this year match those, with Hardaway posting a 26 percent usage rate with Doncic off the floor while averaging 1.3 DK points per minute. That's a stellar rate from such a cheap player, and it makes him hard to fade with so many opportunities headed his way.

We already mentioned how Cleveland has to cope without Sexton, but they could be missing Evan Mobley, Lauri Markkanen, Jarrett Allen, and Kevin Love here as well. Love is actually the only one who has a slight chance to play, but it's going to leave a ton on the table for guys like Okoro and Osman. Cedi is the gem of the bunch, leading the team with 1.5 DK points per minute with those four guys off the floor. That should guarantee him a start and 35 minutes of play, which is impossible to fade for someone this cheap. Okoro isn't quite as good of a playmaker, but he might not hit the bench at all here. He was already playing 30-plus minutes as this team's defensive stopper, and getting more shots and usage should make him fantasy-relevant here. That's big news with Isaac dropping a season-best 29 DK points in his most recent game.

Tyler Herro is tough to avoid if Jimmy Butler remains out.

This is always the premier spot to use Porzingis. I remember that we recommended him pretty much every time Doncic was out, and KP always provided us with pristine performances. In fact, he averaged over 40 DraftKings points per game in that role, taking over this offense in his absence. He's been doing the same thing this year, leading the team with a 31 percent usage rate with Luka off the floor while posting an absurd 1.47 DK points per minute. That would be over 50 fantasy points if he plays 35 minutes, and that seems like a strong possibility here. Not to mention, Phoenix owns a 25th OPRK against opposing PFs this season, too.

Big Beef Stew was a disaster through the first month of the season, but the last two games have us really encouraged! The problem with Stewart was that he wasn't playing enough, but with Kelly Olynyk out for the next two months, Detroit doesn't have a choice. That's led to Isaiah scoring at least 28 DK points in back-to-back games, playing at least 27 minutes in both. This dude has proven to be a fantasy-point-per-minute producer in the past, averaging 1.2 DK points per minute last season. If he can get back to that rate and play 25-30 minutes a night, we're talking about a player who should be at least $1,000 more. He'll be needed here, too, with Indiana sending out a formidable frontline consisting of Myles Turner and Domantas Sabonis.

If Robert Williams is out, Al Horford becomes an excellent pivot.

Like many players in this article, AD has taken on a huge role because of injury. With LeBron off the floor, this has been Davis' show. In fact, The Brow has a 31 percent usage rate with LBJ in street clothes, providing 1.4 DK points per minute. That ravishing rate is hard for most players, but it's not that far off of Davis' career averages anyway. He's shown an immense floor with James sidelined, too, scoring at least 65 fantasy points in three of the games he's missed. That's truly brilliant, and you better believe Davis will take on a monster role against a Bucks team that is struggling mightily on the defensive end of the floor. In addition, AD has at least 43 DK points in nine straight meetings with Milwaukee.

Turner has been one of my favorite players since he was drafted, and it appears we're finally getting the ceiling we've been waiting for. Before a nightmare game on Monday, Myles had at least 29 DK points in nine straight games. He also averaged over 40 fantasy points per game in that unbelievable stretch, swatting 3.8 shots per game. That's what makes him such a scary option, especially since he had double-double averages in that span too. The matchup with Detroit might be the best part about this, though, with the Pistons ranked 25th in defensive efficiency ratings.

If Kevin Love starts for the shorthanded Cavs, he's definitely in consideration. Deandre Ayton is just $6,200 on DraftKings if you want a free square too.