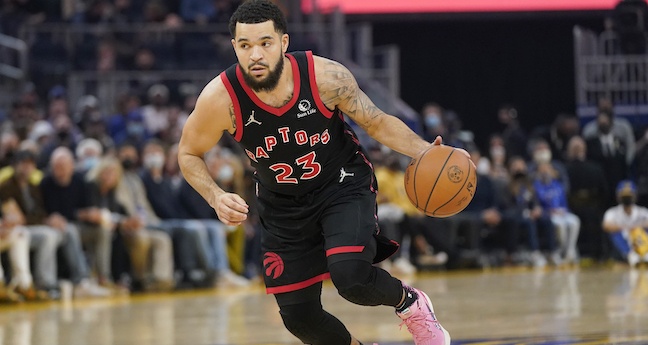 Not only is VanVleet an excellent player, but he has a lot of safety on a night-to-night basis in terms of DFS because he just is on the court so much. He leads the league in minutes per game this season, averaging 38 each time out. And when games are close, that number can tick up to about 40. On the season, he’s averaging 20 points and 6.5 assists per game, shooting almost 40% from three and taking more than 16 shots per. Memphis is coming in with the league’s worst defensive efficiency this season at a 112.3 rating. This is such a good matchup and VanVleet has a high floor.

In their first game without the injured Ja Morant, the Grizzlies had no trouble at all against the Kings. Memphis blew out Sacramento 128-101 in an easy win. None of the starters were taxed on their minutes so we didn’t get a true sense of the rotations without Morant. But Tyus Jones was solid in the start, finishing with six points, eight assists, and three rebounds. The numbers won’t play you away, but that was in only 24 minutes. It stands to reason he plays at least 30 in this new role meaning the production should tick up with the volume.

Fair warning, there are a lot of Memphis Grizzlies guys you can play on this slate. That’s what happens when a team loses their best player and the prices don’t come up to match the new opportunity. Bane is having a breakout season in his second year, getting the chance to start and making the most of the opportunity. He’s shot 42% from three through his first two seasons and has shown he can score consistently at the NBA level. His price, like some of his teammates, is just too low for the usage and on-ball increase they are going to see with Ja hurt.

The Kings have been involved in some weird games, sometimes on the wrong side of blowouts and other times going to overtime games. With the coach firing and shoddy play, it’s tough to get a read on what the plan is (if there is any at all) for this squad. I do think Haliburton is a good price on FanDuel especially with the plan seemingly to play him high 30s minutes if the game is close enough. The Kings are home underdogs against the Lakers though the latter has had their own issues pulling away from teams this season. Haliburton does just enough across the box score to warrant a play at these prices and has really been able to contribute on the defensive end with 2.6 blocks+steals per game this season.

From a statistical perspective, Brooks is one of the biggest beneficiaries of Ja Morant being out of the lineup. The former sees upticks across the board in scoring, rebounding, and assist rate. Over the last couple of seasons, Brooks has a 26% usage rate, but the number ticks up to 30% when Morant is off the court. That’s the second-highest on the team. He took a whopping 17 shots in just 21 minutes last game with Morant out just to give a glimpse of how much this guy is going to be chucking in the short-term. His DraftKings price really came up, but the FanDuel salary isn’t even close.

It was announced that Alec Burks is going to, at least for now, permanently replace Kemba Walker in the starting lineup. The latter is going to take a seat for the short term and will be out of the rotation. Now, Derrick Rose might be back for this game which could cut into Burks’ minutes as a starter. But in his first start, Burks played 39 minutes, took 17 shots, and finished with 23 points and seven rebounds. If he’s going to maintain solid usage in the starting lineup then these prices are way too low and haven’t been updated for his new role.

Like we said with Fred VanVleet, the Raptors get a great matchup against the Grizzlies here on Tuesday for the shorter slate. They are running up against the worst defense in the league and Toronto loves to play its starters a ton of minutes. That’s just been the Nick Nurse way and this season has been no different. The rookie Barnes has been super solid in his first season, putting up 15 points, eight rebounds, and three assists per game so far. He’s found a way to stay active from a fantasy perspective even with some other higher-volume shooters on the floor at times for the Raptors. I think his FanDuel price is still a bit too low.

Meanwhile, with OG Anunoby and Khem Birch out of the mix and injured, Precious Achiuwa has been in the starting lineup and is playing solid minutes. He’s a fine, but unspectacular play at these prices but I think the floor is high enough considering the price is still pretty low. I like him much more on DraftKings as a quasi-punt play. Again, the ceiling isn’t tremendously high but he should play enough to hit value.

Look, when you lose a guy like Ja Morant from your lineup, it’s going to open up a lot of opportunity elsewhere. That’s why you are seeing a bunch of other Grizzlies guys coming up as solid cash plays. Jackson leads the team in usage with Morant off the court in the last couple of seasons, with the 31% rate looking elite. His minutes, at times, can be a bit tricky and foul trouble has done him in, in the past. But last game he took 11 shots in 22 minutes and had double-digit rebounds as well. I think we can stack Memphis here and not worry about it all that much considering their prices didn’t come up enough with Morant out of the lineup.