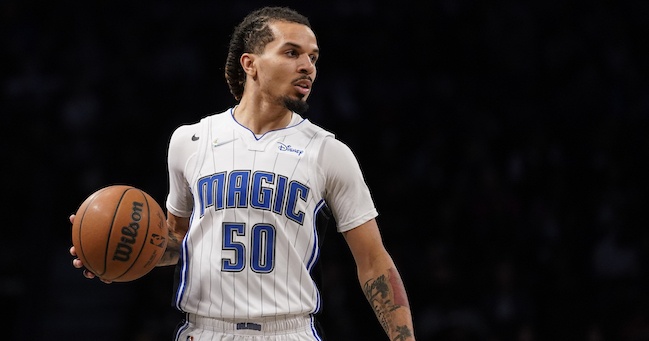 Anthony came back from a somewhat extended absence and immediately played full minutes for the Magic. With Jalen Suggs out of the lineup, Orlando is a bit light on guard play and Anthony didn’t look like there was any rust at all. He immediately dropped 24 points, eight rebounds, and seven assists in a win over the Nuggets at home. Statistically, Anthony is having a breakout season, averaging a 20/7/6 line so far. And now he gets the Rockets, one of the best DFS matchups around. This is such a good spot and Anthony makes for a high-floor cash play.

The Heat are without Bam Adebayo and could be without Jimmy Butler as well. If that’s the case they are a defensively compromised team for sure. Meanwhile, the Pacers are going to be without TJ McConnell for the foreseeable future, leaving their backup guard minutes in a bit of doubt. Brad Wannamaker will pick some of those up. We’ve seen Indiana have no issue with running Brogdon major minutes when need be, and that could be the case here on Friday against Miami. His three-point shooting is a bit down this season sitting at 32% but expect to see at least some regression on that number as time goes on considering he’s sitting at 38% for his career.

Garland is another one having a breakout season with the Cavaliers getting the playmaking and shooting they wanted when they drafted him. It’s come with Collin Sexton out for the season, giving Garland much more on-ball time in the offense. He’s making the most of it, scoring 19 points and dishing out more than seven assists per game so far. The minutes are among the highest you’ll see on a night-to-night basis and the price hasn’t fully come up to represent what he’s been doing in this offense.

The last time Jaylen Brown sat out for a stretch, Dennis Schroder took on the starting guard role and was more than solid. He played 35+ minutes a game and averaged 23 points, four rebounds, and four assists per game in that stretch. I don’t love the matchup against the Jazz here, but his price has come down in the time since Brown has come back. Now, the minutes should tick back up with Brown projected to sit this game. Keep an eye on the injury news for this one. If Schroder starts, then he is a cash game play.

This is an important situation to monitor going into Friday evening. Porter left last game with a thigh issue and he is questionable for this game. If he’s back in action, then I think he’s a cash game play once again. He had been excellent with Jalen Green out of the starting lineup, averaging nearly a triple-double with 16 points, 11 rebounds, and eight assist averages in the previous three games. If he’s back here then I think we run him without question. If he sits, then I think we play Armoni Brooks without any hesitation either. After Porter went down last game, Brooks stepped in and played 30 minutes for the Rockets. He dropped 18 points and added four rebounds. He’s coming cheap on both sites and would make for an excellent punt play if in the starting lineup.

Let’s just load up on the Rockets here why don’t we. Tate had a slate-busting game on Sunday after Porter and Wood both went down with injuries, dropping 32 points, 10 rebounds, and seven assists in one of the best middle-tier performances you will see all season. There was context behind that huge game, but he had also been good the previous two as well with more offense being spread around for the Rockets with Green out. I still think he’s in play here though am much more interested in the DraftKings price. If Christian Wood is out for this one then Tate is a lock on both sites.

Wendell Carter has been a somewhat popular DFS play when the matchup is right and that is definitely the case here on Friday against the Rockets. Houston ranks 19th in defensive efficiency, but they run the league’s fastest pace. That is a great marriage of stats when you are looking for teams to target against in DFS. WCJ is posting career-highs in points (13), rebounds (9.5), and assists (2.2). His playing time, when the Magic are keeping the game close is very safe, sitting in the low-30’s. The production is more than enough to warrant a play and I suspect he’ll be popular on both sites, but especially DraftKings where he’s way too cheap.

Wood left the game early on Sunday with an ankle injury and didn’t return. But he’s probable for this one against the Magic and because of the quick turnaround on the injury, I think we can project him for full minutes here. Wood had been excellent the previous two games with the Rockets dealing with some injuries, averaging 28 points and rebounds. And he had double-doubled in five of the previous six games. This is another smash spot for Wood who is seeing more opportunity now that they are starting him at center.

The Heat are going to be without Bam Adebayo for a bit here and Dedmon took over the starting center duties when the Heat superstar went down. Dedmon played 31 minutes in the blowout to the Cavaliers, but he put up 11 points and 13 rebounds in that run. He’s set to get a lot of front-court minutes for a Miami team that is without a ton of size here and is short on bodies. I don’t think the price on either site represents his current opportunity and he definitely has double-double average type skills when given enough run.