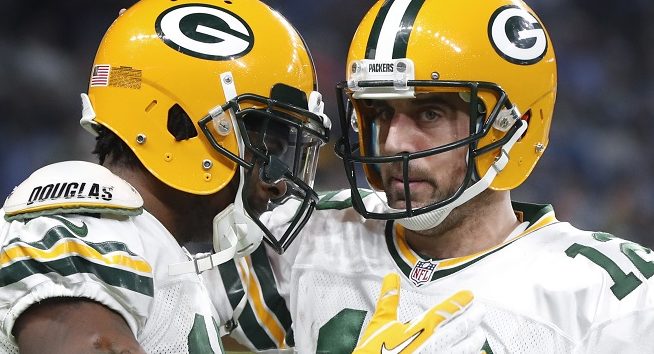 Take 2 for a Saturday slate as last weeks was blown up with the Browns game being pushed back to Monday due to Covid. Coincidentally, those same Browns are back in action this Saturday but this time facing the NFC's #1 seed in the Green Bay Packers. Leading the way is reigning MVP, Aaron Rodgers, who is also the current odds leader to win it again which would make him the first back-to-back winner since Peyton Manning(2008, 2009).

While Rodgers has been great all season, he has been at his best in the short term throwing for over 300 yards in three of his last four games(325.3 avg) with a total of 12 touchdowns. In that time, he has scored 24 or more fantasy points in each game while averaging 30.6 DK/28.1 FD points per game. He now faces a short-handed Browns team that already ranks 23rd in DVOA against the pass. Look for Rodgers to deliver gifts to all the fantasy players who roster him. He is easily my top quarterback on this slate.

Also Consider: Kyler Murray(ARI) as a GPP pivot off Rodgers or Backer Mayfield(CLE) who is slated to return this week and is the cheapest QB on the slate

While the MVP race likely comes down to a battle between veteran quarterbacks Aaron Rodgers and Tom Brady, Jonathan Taylor is most definitely making his case and not that far off sitting at +800 right now. He comes into Week 16 tallying 100 or more yards rushing in seven of his last nine games(132.3 avg) and has totaled 97 or more yards from scrimmage in 11 straight(146.6 avg).  & BUF). That alone has me feeling a lot better about this below-average matchup against the Cardinals who rank 8th overall in DVOA against the rush. Believe it or not, there is even a path to playing a Rodgers/Adams stack and Taylor together. Sign me up!

This play is a bit speculative as James Conner is currently questionable and hasn't practiced all week. Edmonds returned last week, played 40% of the offensive snaps, and while he only got six carries, he turned them into 53 yards(8.8 per carry). He showed he can be consistent early in the year when given the opportunity as he tallied 12 or more DraftKings points in each of his first four games and is also a plus pass-catching back who had three or more catches in six straight to open the season. It's that pass-catching ability that I am mostly looking to in this one as the Cards are underdogs here and the Colts, while 4th in fantasy points to running backs, have given up the 6th highest yards per catch to the position.

We are going to have to monitor this situation leading into lock but if Conner is out or limited, Edmonds would be one of my top overall values at any position.

Also Consider: Nick Chubb(CLE) against a Packers team that is 25th in DVOA against the rush

Unless you are going with a contrarian build, stacking Adams and Rodgers is by far the best way to start building on Christmas. Even with the Ravens holding him to six catches and 44 yards last week, he still scored and put up 16.4 DK/13.4 FD points. In fact, he has tallied double-digit DraftKings points(full PPR) in every game this season and is the only non-QB that can say that. The Packers have now lost Valdez-Scantling to the Covid list so I am fully expecting heavy target share for Adams against a banged-up and short-handed Browns secondary.

For value, I will also be running Allen Lazard who is going to get some added opportunities with MVS out and should be the #2 pass-catching option on Saturday. With his price, I have no problem running a three-headed Packers stack(Rodgers/Adams/Lazard).

The Cardinals will be without their top wideout, DeAndre Hopkins for a second straight week and that is an automatic boost for Kirk. With no Hopkins last week, he saw 12 targets catching nine of them for 94 yards and has 86 or more yards in two straight games. What really stands out to me about Kirk this season is his overall route growth and movement around the formation(pictured below is his week 15 routes). FanDuel got the memo as he is priced up over $7K this week but DraftKings was napping and still have him in the mid $5K range on a two-game slate. Sign me up!

Landry was cleared from the Covid list and is expected to play on Christmas Day along with Baker Mayfield and that would be the best present Browns fans could ask for at this point. I am sure they will both be a little rusty but this is more about the DraftKings price and projected PTS/$ value. It comes down to volume as Landry has tallied 10 targets in each of his last two games and 14 or more DraftKings points in three straight games. If he is in the lineup, he will be one of my top values on the slate against a Packers defense that is sitting 19th in DVOA against the pass.

I mentioned above that the Cardinals will be without DeAndre Hopkins once again this week but some good news hit the team as Zach Ertz was removed from the injury report. He has been dealing with a hamstring injury for a few weeks but looked over it last week catching six of 11 targets for 74 yards. He hasn't been great since joining the Cards via trade but he has been consistent with three or more catches in seven of eight games and 40 or more receiving yards in six of those. There isn't a ton of options at tight end on Christmas putting Ertz as the easy top choice in all formats.

Also Consider: Austin Hooper(CLE) who is back off the Covid list and will resume his role as the Browns top tight end. I also like punting one of the Packers tight ends(Deguara/Lewis) who have been splitting snaps and touches recently but provide some excellent salary relief