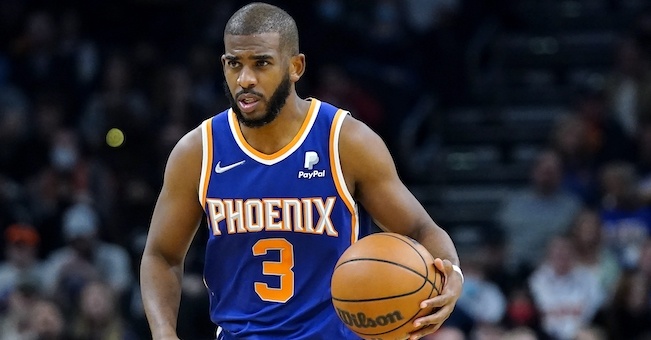 Yesterday was one of the best days of basketball all year! We had the Chicago and Detroit buzzer-beaters happen with minutes of one another, and that all happened before Golden State and Utah did battle. Nights like that help you remember how great the NBA can be at times because there have been a lot of dark moments recently due to the COVID breakout. In any case, it has me rejuvenated and ready to break down this Sunday card!

Stacking against the Hornets is one of the most profitable propositions in NBA DFS right now. Playing at the second-fastest pace is one thing, but ranking 28th in defensive efficiency and dead-last in points allowed makes them the best matchup in the NBA. All of that puts many of these Phoenix players in play, with CP3 looking like one of the best values. We say that because he's below $8K on both sites and has performed well above that price tag. In fact, Paul is providing a 39-point average for the season, scoring at least 34 DK points in all but nine games this season. That floor feels guaranteed in this sort of matchup, but 40-50 DK points seem like the most likely outcome.

We're slightly hesitant to ride Brunson here if Luka Doncic returns, but it really shouldn't matter with Kristaps Porzingis being rested for this game. KP is really the only one taking usage away from Doncic and Brunson, with JB running a lot of the offense over the last three weeks. Jalen has scored at least 34 DraftKings points in each of his previous seven games, generating a 40-point average in that stretch. That's hard to overlook from a player in this price range, and it feels like JB will start next to Doncic with Porzingis sitting here. Oklahoma City is far from scary, too, owning one of the worst rosters in the NBA.

LeBron James is stealing the spotlight in LA, but Russell Westbrook has been a triple-double machine since Anthony Davis went down.

With Shai Gilgeous-Alexander entering COVID protocols, Giddey should get all the usage he can handle. The Australian rookie was already the primary ball-handler for the Thunder, and it's scary to think what he could do with SGA's 20 shots and 30 percent usage rate out of the lineup. Josh has been excellent with Gilgeous-Alexander recently anyway, scoring at least 29 DraftKings points in eight of his last nine games. His stat-stuffing is the thing that makes him so valuable, averaging 11.8 points, 7.9 rebounds, and 6.9 assists per game in that span. That means a triple-double is definitely in play without SGA, and that'd be a fantastic feat from such an affordable player.

Miami has many players in COVID protocols, and it's leaving these other guys to feast. Herro was already one of the focal points of the offense anyway, posting a 32 percent usage rate with this current roster. That's on par with many of the superstars in the NBA, and it's led to Herro scoring at least 36 fantasy points in four of his last five games. That's pretty much the guy we've seen all year, though, with Tyler tallying an impressive 34-point average. The best part of this is the matchup with Sacramento, though, with the Kings ranked 26th in defensive efficiency and 28th in points allowed.

Franz Wagner has been a beast for Orlando recently and should benefit with Jayson Tatum out for Boston.

If we like Herro, we have to love Jimmy. This is the only Miami player with a higher usage than Herro, generating a 33 percent usage rate with this current roster. More importantly, he's averaging about 1.5 DK points per minute in these circumstances, stuffing the stat sheet at ease. That would equate to 60 DK points if he plays 40 minutes, and that's far from a stretch with a guy like Butler. He's been showing that sort of ability all season, scoring at least 34 DK points in 17 of 20 games. All of that should be much easier to accomplish in a matchup like this, especially with Miami projected for 110 points.

We've been waiting to see LeVert break out in Indiana, and we're finally getting our wish. It's taken a couple of injuries to get him there, though, with Malcolm Brogdon and T.J. McConnell both sidelined. Those were the two primary point guards before, and it's leaving LeVert with all of the ball-handling duties. That has led to the best stretch of his career, with Caris collecting at least 47 DK points in five of his last six games. You usually see that average from a $10K player, and these prices simply can't raise his price enough. The matchup with Cleveland is nice, too, with the Cavaliers owning a 26th OPRK against opposing SFs.

Cameron Johnson has been a good value below $5K for most of the season.

This projection feels crazy, but King James is on another planet right now. The 37-year-old has completely taken over this offense in the absence of Anthony Davis, scoring at least 59 DraftKings points in six of his last seven games. He's actually got a 63-point average over the previous three weeks, and it makes it easy to understand why our projections are so lofty. The simple fact is, LeBron is flirting with a 40 percent usage rate in this expanded role, averaging nearly 25 shots and 40 minutes a night in that span. It's hard to believe that a 37-year-old vet is doing these things, but it should be even easier here, with Minnesota ranked 21st in total defense.

This DraftKings price is a bit elevated, but Toppin is one of the best values out there on FanDuel. A COVID breakout in New York is the thing that's really opened up the door for Obi, with Toppin taking a ton of Julius Randle's minutes. In the first game without Julius, Obi picked up 27 minutes in his first career start. He didn't really do anything from a fantasy perspective, but getting that much playing time in this price range makes him tough to avoid. This is a talented guy, too, with Toppin averaging 16.5 DK points per game in fewer than 16 minutes a night. As long as he can keep that rate going with his increase in playing time, Obi could be one of the best value plays on the board!

With Richaun Holmes out, Marvin Bagley could be a sneaky play with how shorthanded this Sacramento frontcourt looks.

I've become infatuated with Yurtseven over recent weeks, and it's easy to see why. This guy cleans up the glass like a high-rise window cleaner, picking up at least 12 rebounds in seven straight outings. That has allowed him to score at least 31 DraftKings points in each of his last four games, seeing an increase in playing time nearly every time out. It's the absence of Bam Adebayo that's really opened things up for Omer, and he should continue to provide double-doubles at ease as long as Bam remains out. Facing Sacramento isn't too shabby either, surrendering the fifth-most fantasy points to opposing centers while providing the subpar statistics we mentioned earlier on.

It's disappointing that we had to wait this long to mention Sticks because this guy is my favorite per-dollar play on the board! Like most of these guys, Smith has found himself in a prominent role because of COVID protocols. Deandre Ayton is the main guy missing, but JaVale McGee joining him has left Jalen as one of the only guys remaining. That has allowed Smith to score at least 28 DK points in three straight games, picking up his first career start over the weekend. He's also playing 27 minutes a night in that span, and it's going to be hard for this club to take him off the floor with their two best centers missing. We already discussed how good a matchup Charlotte is and that makes Sticks even more enticing!

Naz Reid is risky, but if you hear that he's starting for Karl-Anthony Towns, don't forget about him.