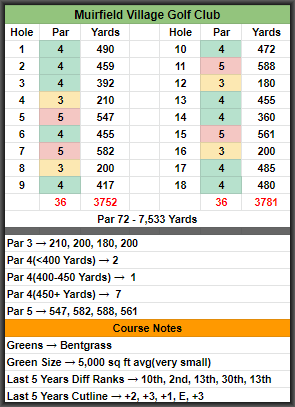 This week the PGA Tour heads to Muirfield Village Golf Club for the Memorial Tournament. You may remember last year with Jon Rahm dominating on Friday(65) and Saturday(64) to take a six-shot lead only to be told post-round he tested positive for the vid and was forced to withdraw. Patrick Cantlay along with Collin Morikawa inherited the lead with Cantlay going on to win his second Memorial in four years. You will also notice two entries for course history on sheet this week for 2020 and that was during the pandemic when Muirfield hosted the Workday Charity Open weeks before the Memorial.

Muirfield Village ranks as one of the hardest non-major venues on Tour and that has been especially true over the last two trips where it's ranked 10th and 2nd hardest(stroke average) and that includes the majors! While some of the fairways are fairly forgiving the rough is anything but listed at an average of 4 inches. This means golfers can't just bomb and gouge if they plan on contending for a trophy. I am looking at golfers with a complete game off the tee(total driving/SG: OTT) and leaning towards accuracy over distance and for those players who are shorter off the tee, I will also be focusing heavily on long iron play. That iron play(SG:APP) will also be at the top of my model this week at a course that is often referred to as a "second shot" type course.

With all that said, let's get into my core plays for the week.

Let's start right at the top with the narrative everyone is talking about as Rahm should be going for his third straight win at Jack's Place if not for the withdraw after round three last year when he held a six-stroke lead. He comes in with a win at the Mexico Open but surrounding that win is some up and down form at some big events(T48-PGA Champ, T27 Masters, T55 Players) that falls on his approach game for the most part. Considering he is #5 in SG: Tee to Green and 1st in SG: Ball Striking, and 5th in Proximity over the last 24 rounds, I am not at all concerned. He has dominated this course over the past two years and I feel he uses the same motivation from that WD he did to win the U.S. Open last year in his first start back. Rahm is my pick to win and my favourite top-tier play this week.

There is no shortage of players who check all the boxes up top this week but Spieth stands out for me, at least on DraftKings where the price has dropped back below $10K. He is coming off his third Top 10 in four starts including the win at the RBC Heritage and ranks 2nd in SG: Tee to Green, 7th in SG: Approach, and Top 10 in both Par 4 and 5 Scoring over the last 24 rounds. He has yet to win at Muirfield but has some strong course history with Top 20 finishes in there of his last four trips and ranks 6th in SG: Total here in that time. All things considered, I will have a lot of Spieth exposure in all formats.

Two of the biggest standouts in terms of this week's salary vs season averages are rookies Davis Riley and Cameron Young but I have the latter ranked just a bit higher in my model this week. After missed cuts at the Players Championship and the Masters, Young has caught fire with three straight podium finishes at the RBC Heritage, Wells Fargo, and PGA Championship while gaining an insane 36.5 strokes tee to green. If not for losing strokes putting in two of those events, he may have his first victory on Tour. The price has gone up but he is still a core play for me in all formats.

Wise is easily one of, if not my favorite PTS/$ value of the week as he checks off every single box for me starting with a mid-tier price that is below his season average on both sites. While his form isn't quite as sparkling as Young's, Wise comes having made six of his last seven cuts with a Top 10, four Top 25 finishes and is averaging over three strokes gained on approach in that time. In terms of course history, his relationship got off to a rocky start with Muirfield Village(T86, T74, T68) but the good news is he dropped a T9 in last year's event and is now playing some of the best golf of his career. Lock and load in all formats at these prices.

Steele is one of the most interesting plays on DraftKings as it brings in so many narratives. First of all, he is going to be the highest owned value play at his mid $6K price tag given his plus course history(made seven straight cuts) and coming off an impressive T9 at the PGA Championship. The form reaches deeper than that as he has now made five straight cuts after a horrendous start to 2022 missing five straight. I could argue both sides here as he makes a ton of sense to open up a stars and scrubs build in an elite field but also makes a terrific leverage pivot in GPP to get an edge on 10-15% of the field should he miss the cut or finish at the back of the pack. Personally, I love it in cash games and single entry but will be making some pivots in GPP.