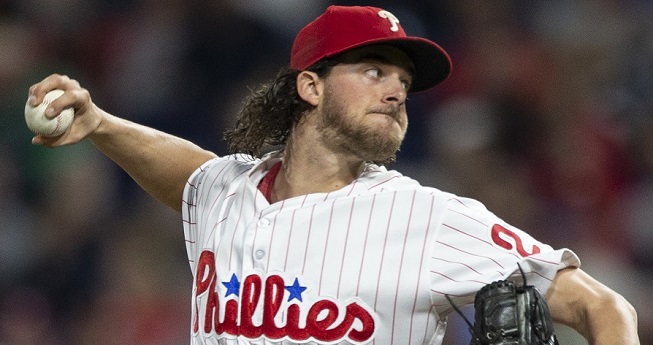 Nola has, once again, been one of the best pitchers in the game this season and is ultra-efficient when he takes the mound. He’s averaging close to 6.5 innings every start this season and striking out batters at a 29% rate while walking them only 3% of the time time. He’s got the xFIP under 3.00 on the season and the only issue with Friday is that he’s facing a somewhat tougher matchup in the Padres. But otherwise, everything lines up for Nola to be a strong cash option.

Springs has been pretty excellent since joining the Rays’ starting staff back at the beginning of May. He’s striking out more than a batter per inning, and in general, has been able to limit the walks as well. On Friday he draws a great matchup against the Pirates who rank 28th in team wOBA on the season and are striking out 25% of the time. They stink. The Rays come in as one of the biggest moneyline favorites on the day giving Springs some of the best win odds.

Bride was just recently called up to the majors, but he does project as a bat who can do some damage at this level. And the A’s certainly believe it to be the case because they are hitting him second in the lineup right now. He was incredibly tough to strike out in the minors and took walks at a better than 10% rate. He doesn’t have tremendous power, but limiting the K’s and taking free passes is the best way to kick things off fantasy-wise. Plus, he’s coming just about free on both sites.

I don’t mind going a little cheaper at first base for this Friday slate and Melendez is a bargain on FanDuel right now. He’s facing off against the lefty Cole Irvin and in a limited sample size, MJ has crushed southpaw pitching. It’s looking like the much better of the two sides of his platoon. He should be around the middle of the Royals’ lineup and they have a 4.9 run line, one of the highest you will see for this squad.

The Rangers have one of the higher implied run lines on the day, hitting at home against Espino and the Nationals. Semien is starting to pick things up a bit in the short term after a dreadful start to his first season with the Rangers. He’s got six hits in his last five games and there’s at least some hope he can salvage part of this year before it’s all said and done. Even for the struggles, the price hasn’t dipped all that much, especially on DraftKings. But I do think he’s still a worthwhile option on FanDuel.

Merrifield is another guy who’s struggled this season with an OPS still sitting in the high .500s through more than 300 plate appearances. That’s a real rough showing for a guy who was projected to have some fantasy upside this season. His gift is the speed though it’s tough to steal bases if you can’t get to first in the first place. He is having some BABIP issues with that number about 80 points lower than his career average and you have to like the matchup with Irvin. I can live with the DraftKings’ price on Friday.

Seager is putting together a solid enough season so far for the Rangers with an OPS in the mid-700s, and 15 home runs which has him on pace for career power marks. Paolo Espino is a low-K arm who isn’t nearly as good as his 2.29 ERA would suggest on the season. The xFIP is actually in the mid-4’s. I like stacking Rangers on this slate on FanDuel, especially where the prices aren’t out of bounds.

Anderson has been pretty great this season with a .984 OPS thanks in part to an 85% contact rate because he’s only striking out 10% of the time. The BABIP should always stay on the high side because of the speed and you don’t need to break the bank on him on FanDuel at least. It’s a bit closer on DraftKings where he’s expensive, but there’s a reason for it seeing as how he gives you a very high fantasy floor.

The Diamondbacks are another team pushing an implied run line up and around 5.0 on Friday and there are reasons to like some guys at the top of their order in cash. Rojas should hit third in the lineup against the right Rony Garcia. He has an OPS in the low .700s with bits of power and speed in the profile. For his career, Rojas has been better against lefty pitching, but a lot of that is BABIP driven. I like the price on both sites and think the Arizona guys have some upside.

Third base is a real problem on this slate and it isn’t even like I think Rojas is some world-beating option at the position. He’s not, but things are just really thin all around outside of the heavy hitters like Jose Ramirez and Rafael Devers who are prohibitively expensive considering the spots their respective teams are in on Friday.

It doesn’t always take a ton of convincing to play Mike Trout on any given slate. The dude is just a generational talent and is now having one of his best seasons yet, which is really saying something. He has a 1.025 OPS with 21 home runs, and a .432 wOBA. His curse is that the Angels just seem like they’ll never be good throughout his tenure there, but it’s hard to blame him considering he’s been one of the best hitters in the history of Major League Baseball.

Meanwhile, Ward is keeping up his surprising season with a .978 OPS thanks to a 14% walk rate and 11 home runs. He’s had some injury issues this season, shuttling him back and forth off the IL, but when he’s been in the lineup Ward is a perfect table-setter to Trout and Ohtani in this Angels’ order which really drops off after those three.

Varsho is here because Arizona does project to put some runs up on the board for Friday and he’s slotted to hit in the leadoff spot once again. The price is a bargain on FanDuel considering the spot in the order even if he’s not the most prolific hitter out there. But he does have some pop in the bat with a bit of speed as well.